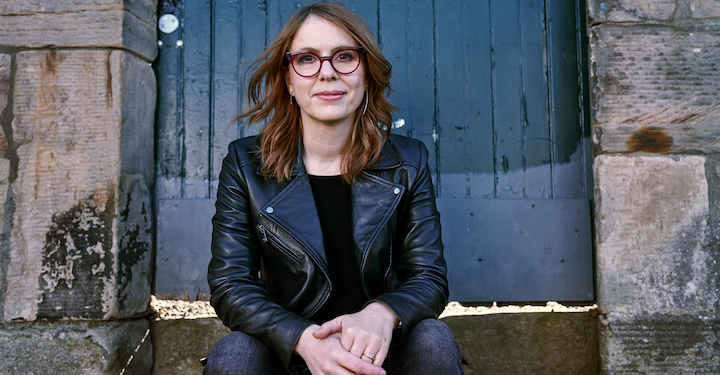 TROY — Anna Clyne has unconventional ways of composing her music.

The New York Times said as much, describing the Grammy Award-nominated songwriter as a “composer of uncommon gifts and unusual methods.” Her process can vary depending on the source of her inspiration.

This Thursday, The Scottish Chamber Orchestra will perform one of her pieces at Troy Savings Bank Music Hall as it re-imagines the classical works of masters and romantic greats. The evening is to feature a performance from Queen’s Medal for Music-recepient, violinist Nicola Benedetti. Tickets for the upcoming Troy Chromatic Concerts 125th season can be purchased by phone at 518-273-0038, in person, or online at www.troymusichall.org.

Her first piano was in Abingdon, a well-loved instrument that was missing a few keys, that was gifted to her family by friends when she was 7 years old. Piano lessons followed, and then she began writing music for her and a friend who played the flute. All the while, avoiding those missing keys.

Today, her piano is in a “small, but beautiful” house in New Paltz. She has taken her music from the Thames to Edinburgh and across the Atlantic Ocean to New York City. She and her husband, Jody, moved to the Hudson Valley just prior to the real estate boom spurned on by the pandemic. She initially feared that a move to the country would effect her writing; that she would no longer be able to feed off of the energy from city life. But, she said, “it’s wonderful when you’re doing something that’s very solitary to have both space and peace, and quiet.”

Clyne starts at the piano before moving to her computer. From there she said she can conjure crude bits of sound from computer notation software, providing her a sense of pacing. She embraces the comparison to a club DJ. Joel Zimmerman, better known as Deadmau5, pieces soundfiles together to compose sounds that move people. Clyne can visualize her work through the monitor, creating what she needs, sometimes arranging the abilities of conventional orchestral instruments to mimic industrial sounds.

“I find it to be incredibly helpful in having that interactive DJ-like, hands-on music,“ she said.

Clyne’s soundworld is defined by her background in electroacoustic music. It’s a genre that embraces technology. Reverb is a tool, and is manupulated into composed work. As apt as she is to draw inspiration from dead European composers, she can settle into something from today’s popular music. She recently reimagined tracks from Thievery Corporation’s “The Cosmic Game,” arranging the electronica duo’s work for orchestra. Her music has also been programmed by other contemporary artists, Björk is another example.

“So I’d say that my soundworld owes a lot to those electronic processes,” Clyne said. “So when I’m orchestrating a melody, for example, in an orchestra rather than just having a violin playing it, I might double it with a vibraphone and oboe to create a new instrument. And that’s one of the things I love about writing for the orchestra, you can create your own instruments by painting these different sonorities together.”

Clyne is one of the most in-demand composers today. On Thursday night, the Scottish Chamber Orchestra will feature a piece Clyne originally wrote for the Australian Chamber Orchestra to celebrate Ludwig van Beethoven’s 250th anniversary in 2020. Drawing inspiration from the revered German composer’s popular “Sonata Pathétique.” She named the piece “Stride,” identifying with the striding lefthand octave characteristic from the 18th century piece. After its premiere, Bachtrack described it as “reminiscent of the sound effects in the shower scene from Alfred Hitchcock’s film, Psycho.”

Clyne is often busy with teaching engagements and travel. Her work has been commissioned and presented by the world’s most dynamic and revered arts institutions, including the Barbican, Carnegie Hall, Kennedy Center, Los Angeles Philharmonic, MoMA, Philharmonie de Paris, Royal Concertgebouw Orchestra, San Francisco Ballet and the Sydney Opera House. The relative jetset lifestyle, she said, helps her appreciate the idle aspect of the creative process.

“Sometimes part of the creative process is, is not composing, but taking in inspiration from other art: going to a museum or living in such a beautiful area, going for a walk, even going to a coffee shop with friends and brainstorming ideas,” she said. “So that — even though notes might not be going on the paper — part of the creative process is gathering ideas and really reflecting on what the pieces you are about to compose are going to be.”

SPOTTED: Voorheesville girls get by Mohonasen