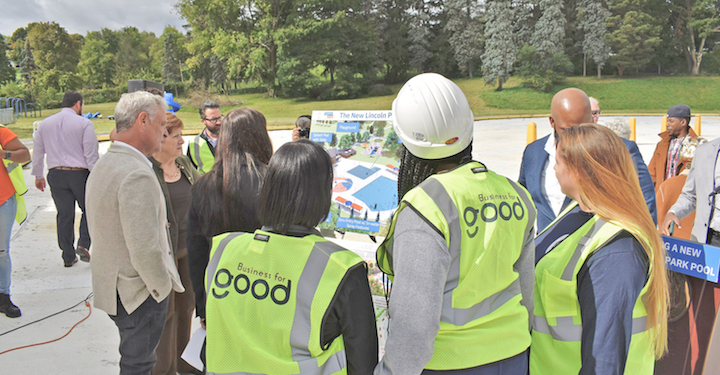 ALBANY — The Lincoln Park Pool has had a water problem that has forced city leaders to wrestle with the thought of closing the nearly 100-year-old summer attraction altogether since the 1980s.

Next summer, it will be closed — but only for it to be replaced.

Mayor Kathy Sheehan joined Department of Recreation Commissioner Jonathan Jones on Wednesday, Sept. 28 to announce the final concept for the new Lincoln Park Pool. The idea was voted upon by approximately 1,600, with an overwhelming majority choosing to retain its unique zero-entry features.

The City anticipates obtaining final engineered design plans early next year and will publish a Request For Proposals to both demolish the current structure and build the new pool by 2024. As drawn today, it is a comprehensive plan that includes a 10,000-square-foot zero-entry pool, a 10-Lane half-sized Olympic lap pool, a 6,000-square-foot splash pad, and a water slide. The plan also includes a new, 10,000-square-foot playground, with restrooms and shade pavilions.

The City has long grappled with repairing or closing the neighborhood pool. It was first opened in 1930 in what once was a ravine. William Kennedy recalled how the stream that ran through the ravine was heavily polluted by residents and surrounding breweries in his book, “O Albany!”. The ravine was filled to create Lincoln Park.

The park has been a recreational center for the South End community ever since. Wagers over semi-professional baseball games sometimes sparked fights before the match’s outcome was determined. Those hooligans were later brushed aside, later ushering in tennis courts and a playground. Since the pool was built, an estimated 1,200 city residents visit for a summer respite.

But the pool leaked. A lot. The City says it has been leaking since it was opened 91 years ago. It was recently estimated that 300,000 to 500,00 gallons escape the pool each day. Mayor Kathy Sheehan said that its water had to be shut off at times to allow emergency crews to fight neighboring fires.

Twenty years ago, then-Mayor Jerry Jennings threatened to replace the old pool, and its 1.1 million gallon capacity, with a smaller lap pool. Neighborhood advocates, however, pressed to preserve the pool’s unique characteristics, demanding it remains open for a beleaguered community. The City estimates that will cost $10 million, and it’s willing to try.

“During its 91-year history, it is estimated that hundreds of thousands of people have used the Lincoln Park Pool – whether learning how to swim for the first time or cooling off with their friends and family on a hot summer day – and the pool’s unique bowl shape and location in Lincoln Park invokes deep memories for those who have visited,” Sheehan said during a Wednesday morning press conference. “Our residents deserve a new facility that can serve our City for another 90 years, and we are one significant step closer to that goal thanks to the generosity and partnership of Ed, Lisa Mitzen, Jahkeen Hoke, and the entire team at Business for Good.”

Ed Mitzen, Business for Good Co-Founder and the Lincoln Park Pool Capital Campaign Committee Chair, announced a $1 million donation toward the construction of the new pool, sharing his goal of raising a total of $10 million from the Capital District’s philanthropy community.

“We founded BFG with the intention of investing in communities and improving people’s lives,” Mitzen said. “The Lincoln Park Pool will provide families and friends in downtown Albany access to a state-of-the-art recreational spot to gather, get relief from the summer heat, and have fun with activities such as learning how to swim and other aquatic programs.”

Formed in 2020, Business for Good is a philanthropy group focused on equity, access, opportunity, and prosperity. Its efforts were recognized on a national level as a 2022 recipient of Fast Company’s World Changing Ideas Awards, which recognizes pioneering teams that are playing an important role in the betterment of the world through intentional philanthropy.

Designed by the Albany-based engineering firm Weston & Sampson, construction is expected to run through next summer. Sheehan said, however, she hopes that would lead to the project’s completion in time for 2024. The amenities promised in the new plan retain the features community leaders fought to keep.

“The Lincoln Park Alliance is grateful for the community feedback and collaborative efforts to advocate for the renovations of Lincoln Park Pool,” Lincoln Park Alliance Chair Lily Mercogliano said. “As a treasure within our community, we are committed to the best renovation outcome for its future use. … It is truly an investment in the future of recreation in the South End as well as the entire city.”