Jonah Michel is capturing the Capital City’s vibe, one ‘Instagram moment’ at a time 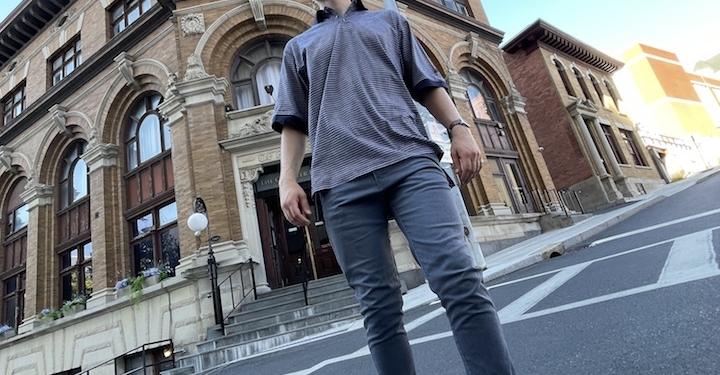 ALBANY — Jonah Michel is tapping into a vibe Albany residents have long ignored.

Through AroundAlbany, a popular Instagram account he created, he first started capturing the city’s good side with pictures during the pandemic. He’d walk around his home city, and if a sight caught his eye in an inspiring way, he’d snap it with his phone. Today, when he uploads that picture, he’s garnering an online audience old media outlets would envy.

“I began exploring new areas, neighborhoods, niches, and networks around the city of Albany and not once did I see the so-called ‘blight.’ I only saw an opportunity,” he stated in a recent social media post.

Michel said the day he was born, his parents bought their first home computer. The pathway to to world ahead of him was already stretched beyond the confines of the interstate highways that criss-cross here. This may explain his affinity to see that opportunity.

The 25-year-old was raised in Clifton Park, where he said he ran around exploring the outdoors, untethered to that home computer. He is of a generation of an always accessible internet, but he said he didn’t step into social media until much later. His penchant for storytelling was influenced by his grandfather, Ernest.

Before Ernest became chairman of the World Gathering of Jewish Holocaust Survivors or covered the Nuremberg Trials as a correspondent for the German General News Agency, he served 22 months in the Nazi death camp of Auschwitz.

“I grew up sitting on his lap, telling me stories about his time,” Jonah said. “He spent his entire life sharing the stories of what happened to him and those around him. He made promises to his friends and his family in the camps during that time that if he survived, he would share their story and make sure that nobody ever forgot what happened to the Jews in the middle of the 20th century.”

Ernest published a memoir, “Promises to Keep: One Man’s Journey Against Incredible Odds,” in 1993. Before he died in 2016, he shared his stories with the Wollheim Memorial. “I never gave up hope,” he said, “but I will never understand how I survived.”

After his grandfather died, Jonah was provided the opportunity to seek a college education. He dropped out after a year unsettled at Oswego State. The decision wasn’t popular with his parents, he said. Instead of pursuing a marketing degree, he traveled Europe and visited his Opa’s homeland. He documented the journey in a digital archive, preserving his family’s legacy on the internet.

Jonah moved to downtown Albany in 2017 and fell in love with its architecture. He was inspired to create an online outlet that would capture local merchandise, but through his studies of his city’s past, he found a different focus.

A majority of Americans receive their news from digital devices. According to a Pew Research Center survey conducted in 2020, more than eight-in-ten adults (or 86 percent) often or sometimes get news from a smartphone, computer or tablet.

Traditional news outlets are in trouble. There’s a disconnect between perception and reality. Where the majority of adults believe their local newspaper is doing well financially. Many of them would be the same to complain about paying for news; only 14 percent say they paid for local news in 2018. In that same year, the data-gathering think tank reported that nationwide newspaper circulation fell to its lowest level since 1940.

Jonah said he was deterred by negative news coverage and wanted to find a positive outlet. He wanted to break down the city’s meager embrace on what made it boring. The Capital City was once a Top 10 city in the United States, he said. He developed a mission to inspire “the next generation of civic pride.”

In September 2020, he launched AroundAlbany on Instagram. The platform targeted an ideal demographic — 20 to 30-year-olds like him — who may be unaware to everything in Albany. The account features original content from Jonah and his staff of freelancers, or from contributors. Everything is captured by the device we all hold in our hands, a cell phone.

Each post garners more than 500 likes, and they vary in focus; from a quick capture of an Empire State Plaza concert, a look into a local merchant’s storefront, or a curated itinerary listing things to do for the week. It’s a full-time marketing business by which Jonah makes a living following new media practices.

“I feel fortunate that I’m able to shine a light on the city in a positive way and, you know, the feedback that we get is really, really special,” Jonah said. “[We receive] messages from people that, you know, we have been thinking about moving to Albany and then, you know, after seeing what we’re doing, they made the decision to move to Albany.

“I’ve had a number of people reach out. I’m not gonna say that we swayed them to move to Albany, but we definitely had a role in that decision.”

Editor’s note — The previous version of this article identified Jonah Michel’s grandfather incorrectly as his great-grandfather.

Colonie to fine those with ‘nuisance alarms’