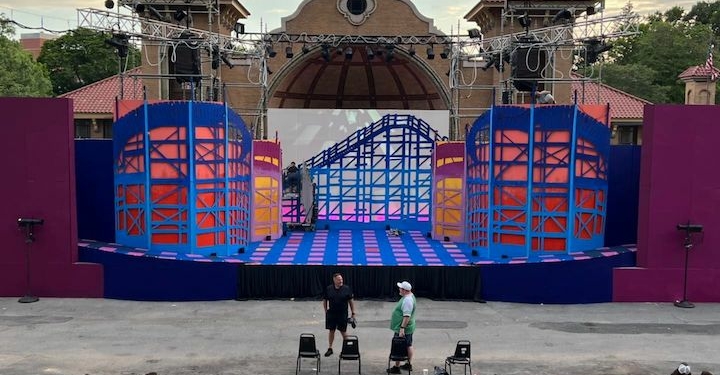 ALBANY – The 34th Season of free musical theatre at Park Playhouse in Albany’s Washington Park is underway with the new musical “Head Over Heels,” which features the songs of The Go-Go’s and solo tracks by Belinda Carlisle.

The production officially opened on July 1, and continues Tuesday through Saturday starting at 8 p.m. through Saturday, July 23. In accordance with the mission of Playhouse Stage Company, amphitheater lawn seating is available free of charge on a first-come, first-served basis. Premium reserved seats on the ground level are on sale.

An unusual spin on the jukebox musical form, the show is not a biographical tale of The Go-Go’s, but rather tells a story based on the 16th Century text “The Countess of Pembroke’s Arcadia” by Sir Philip Sydney. It presents the tale of the fictional kingdom of Arcadia as its long-serving King and his family become imperiled when he receives an ominous prophecy from Pythio, the mysterious Oracle of Delphi. Head Over Heels is notable for the role of Pythio being the first to be written specifically for a non-binary or gender non-conforming performer in a musical. Ellie Francis plays the role in the Playhouse Stage production.

“Head Over Heels is great fun, and filled with classic 80’s music,” said Playhouse Stage Producing Artistic Director Owen Smith, “but it also features themes of freedom of expression and finding and being true to one’s authentic self.” Smith continued, “At a time when we still see so much bigotry, ignorance and hate in the news and the world around us every day, we are proud to present a musical that focuses positively on LGBTQ+ equality, women’s empowerment and the need for peace and love across our society.”

Longtime Playhouse Stage Director Michael LoPorto helms the production, along with frequent collaborator AshleySimone Kirchner leading choreography and musical staging. Brian Axford, acclaimed for his work on last year’s Ain’t Misbehavin, musical directs and leads the five-piece rock band. The show features more than a dozen songs by The Go-Go’s and Carlisle, including “We Got the Beat,” “Our Lips are Sealed,” “Heaven is a Place on Earth,” “Mad About You,” and the title song “Head Over Heels.”

Playhouse Stage continues their “Awesome 80’s Summer at Park Playhouse” in August with the musical adaptation of the popular Adam Sandler and Drew Barrymore movie The Wedding Singer, which features the advanced teen students of Playhouse Stage Academy.

More information about the 2022 summer season at Park Playhouse and Playhouse Stage’s upcoming 35th Anniversary Season can be found online at www.playhousestage.org or by calling the box office at 518-434-0776.

Colonie inducts 3 into Hall of Fame