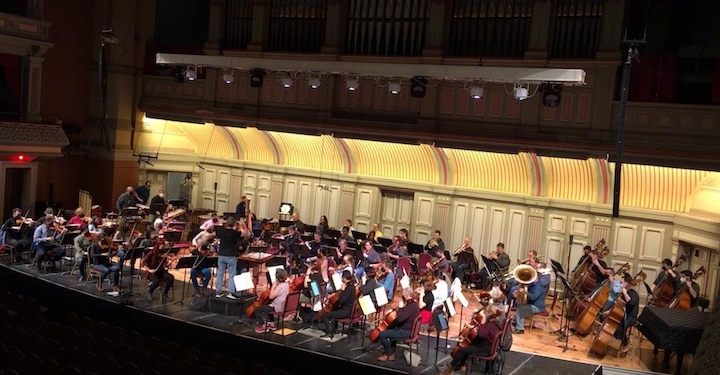 ALBANY — David Alan Miller sits inside at home sipping his one cup of coffee as he “crams music into my head” in preparation for the Albany Symphony’s 2022 American Music Festival, a month-long celebration of new music and the Empire State, called “TrailBlaze NY.”

“I occasionally let myself go outside,” he said. Yesterday, he stole time away to tend to his garden. “Otherwise, there’s not much going on. I literally just have to study scores all day. There’s no time for anything else.”

The music director and his symphony embark on a journey across the Capital Region and Upper Hudson Valley with performances in Cohoes and Troy on Thursday, June 2. Dogs of Desire, the symphony’s chamber orchestra, will hold an open rehearsal from Cohoes Music Hall at 3 p.m., followed by a piano recital from Gloria Cheng at Troy Savings Bank Musical Hall at 7:30 p.m.

When Dogs of Desire returns to the Cohoes Music Hall on Friday, June 3, it will be to perform five world premieres, including “Moments in Motion,” an orchestration of music from Bear Grass by Jack Frerer.

Katie Hammon, singer and songwriter for Bear Grass, said she was approached with the idea several months ago. The songs draw from the band’s 2018 album “Left.” Hammon said one of the songs to be performed by Dogs of Desire was to be played live at Cohoes Music Hall for the first time in March 2020, but the pandemic shut the show down.

“While the album has been with us for a few years now, these songs breathe new life with the sounds of an orchestra,” Hammon said. “Jack has been sharing midi versions with me all along, but I really cannot wait to hear Dogs of Desire amplify them in real life.”

The state launched the Empire State Trail in 2017 to promote outdoor recreation, encourage healthy lifestyles, support community vitality, and bolster tourism-related economic development across its now 750-mile length from New York City to the Champlain Valley and from Buffalo to the Hudson River. Miller, who is an avid cyclist, approached the state with an idea similar to “Water Music NY” to celebrate the Erie Canal’s bicentennial.

“We want, through art and through music, to tell the story of the trail,” Miller said, “ and encourage people in the communities who may not know that much about the trail… to come out and do fun stuff on the trail.”

TrailBlaze NY is supported in part by New York State through a Market New York grant from I LOVE NY, the state’s Division of Tourism, through the Regional Economic Development Council initiative, and the New York State Council on the Arts, with vital additional support from the National Endowment for the Arts and corporate and individual donors from across the region.

The Festival kicks off with a wall-to-wall week of new music in Troy and Cohoes, including performances by the Albany Symphony at the historic Troy Savings Bank Music Hall and the Dogs of Desire, the Symphony’s new-art chamber music group, at the historic Cohoes Music Hall.

“The Troy and Cohoes week of the Festival will culminate on Saturday, June 4, in a magnificent evening of absolutely incredible recent orchestral music,” Miller said. “Pulitzer Prize-winner John