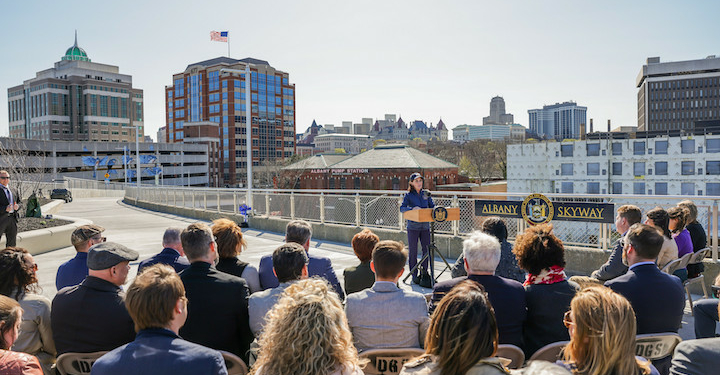 ALBANY — Albany Skyway, a new elevated park reconnecting the city’s burgeoning Clinton Square and Sheridan Hollow communities to the Hudson River waterfront, was opened with a flourish on Friday, April 29.

The underutilized highway off-ramp was targeted for the innovative access and egress for residents returning to Albany as a place to live. The Capital City is now one of a handful of municipalities that includes Philadelphia, Chicago, Miami, London, and New York to repurpose redundant infrastructure as green space to support rejuvenating neighborhoods.

“When people are deciding where they want to live and work, they look for unique features and fresh ideas like the new Albany Skyway that go above and beyond the basic amenities,” said Albany County Executive Daniel P. McCoy. “This elevated park not only connects Downtown Albany to the riverfront and exciting recreational opportunities, but it stands on its own as a space for people to gather and enjoy the outdoors.

The Skyway converted what had been an underutilized exit ramp from northbound Interstate 787 into an urban oasis that provides easy access to the Corning Riverfront Park and the Mohawk Hudson Hike Bike Trail — which is part of the Empire State Trail — boosting recreational opportunities and furthering tourism and economic activity in the Capital District.

The $15 million park was initially launched through Capitalize Albany, which supported and executed a 2018 feasibility study and a preliminary design for the Skyway through its 2016 Regional Economic Development Council Round VI. The pitch helped bring $375,000 in state grants from the New York State Office of Parks, Recreation & Historic Preservation.

The Skyway project permanently closed the underused Clinton Avenue ramp, which travels underneath Interstate 787 and links Quay Street near the Corning Preserve to Broadway and Clinton Avenue at Quackenbush Square. The ramp was repurposed as a landscaped, multi-use park for pedestrians and bicyclists that will provide safe, non-motorized access to the Hudson River and the Corning Riverfront Park from downtown Albany and such neighborhoods as Arbor Hill, Sheridan Hollow and the Warehouse District. The approximately half-mile-long Skyway is fully accessible and compliant with the Americans with Disabilities Act.

The Skyway also features pedestrian lighting, seating and planters along the path and a shade structure near the Broadway entrance. Amphitheater-style seating provides a restful setting with a view of the Hudson River.

Crosswalks, high-visibility crossing signs and push-button beacons are provided for users to access the Skyway across Quay Street at the north and south ends of the Corning Riverfront parking lot. Users crossing Quay Street from the Corning Riverfront lot are reminded to use the crosswalks and push-buttons that will activate the flashing beacons. Motorists are reminded to slow down approaching the Skyway and crosswalks and be alert for the presence of pedestrians and cyclists.

“The completion of the Albany Skyway is a game-changer for the city and the perfect example of a transformative infrastructure project that promotes equity and connectivity,” said Gov. Kathy Hochul. “Infrastructure can be more than just building roads and bridges — like the Skyway, it can be about improving quality of life and righting the wrongs of the past.”

The governor was on hand to announce the opening of the Skyway on Friday. The park, suspended above the Albany Pump Station and within yards of several more residential and hospitality destinations, is the first step towards a larger $400 million project that promises to include the replacement of the Livingston Avenue Railroad Bridge.

The current movable swing bridge would be replaced with a new lift-type bridge which would bring the structure up to modern standards for height, width and speeds for passenger and freight trains and more reliably accommodate marine traffic using the Hudson River.

The new bridge will be located south of the existing bridge on a parallel alignment and would carry two railroad tracks. The approach track work will include improvements to the triangular junction of rail tracks on the Rensselaer side to facilitate train turning movements and the rehabilitation and reconfiguration of the rail bridges over Water and Centre Streets on the Albany side. The new bridge will also include a separated shared use path connecting to the Albany Skyway and Empire State Trail to the City of Rensselaer.

The State Department of Transportation oversaw the Skyway project. The City of Albany will now maintain it.