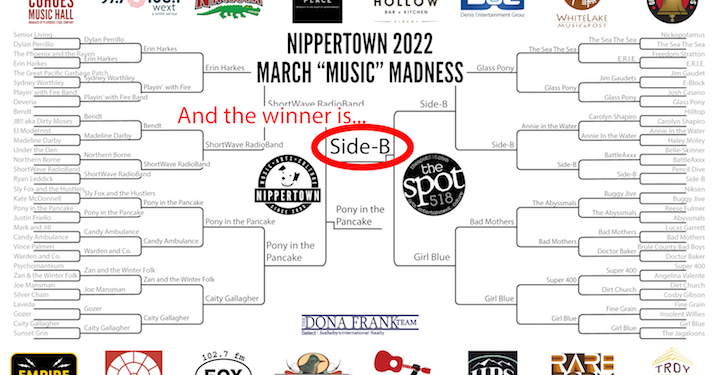 ALBANY — Side-B earned the most votes in the final round of Nippertown’s second March “Music” Madness tournament over the weekend. The Albany band garnered more votes from local fans than the contest’s runner-up, Pony in the Pancake.

By winning the top position, Side-B has earned a three-day session at White Lake Music and Bridge Road Entertainment in Albany. The package includes recording time, editing and mixing, with all studio instruments, equipment, engineer and pre-session consulting provided.

Side-B has also earned $500 and the opportunity to play this summer on the Main Stage at NipperFest, on Saturday, July 23 at Music Haven in Schenectady.

Pony in the Pancake finishes the friendly competition with $300 in hand and has earned a spot to play the Summer on Central Concert Series at The Linda – WAMC’s Performing Arts Center on Saturday, Aug. 27.

“Honestly, any one of the 64 bands that started this year’s tournament had a great chance to win it all, “ said Jim Gilbert, co-owner and publisher of Nippertown. “The region is overflowing with talent from Troy to Schenectady, up to Saratoga, and of course, in the heart of Albany. “

Spotlight on Business 2022: The Works Café brings something familiar to Newton Plaza