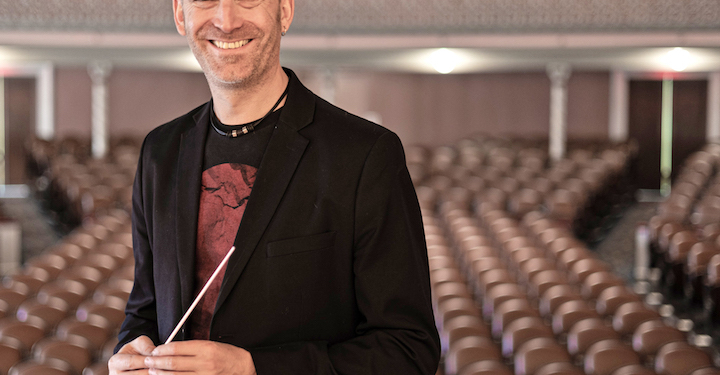 Etienne Abelin prefers the term “legacy.” Nuance, perhaps, but it plays on perception. A classic is a cherished icon not to be altered, but a legacy is built upon. For the conductor, recently named as the Empire State Youth Orchestra’s new music director, beloved compositions of the past deserve to flow into the 21st century.

“I believe in using legacy to create something new, a times raw, at times tender,” said Abelin, who moved from Switzerland to take on his new role. “In doing so, we become ‘NOW-musicians’ and healers in a fractured world.”

He sees the conductor’s role changing. In the Karagan Foundation’s 2021 documentary series “Conducting the Future,” in which he was featured along with Marin Alsop, Paavo Järvi, Lars Vogt, and Miguel Perez Iñestam, he explained how societal changes redefine roles. “The goals of society change a lot,” he said. “Technical dimensions of how art and music are perceived change the context enormously.”

In a “painfully polarized world,” Abelin said music can bridge diverse heritages and their histories to help celebrate belonging. “But in order to bring music to life and to move the people around us, it’s essential for us to learn how to move ourselves, breathe together, listen, and tell captivating stories when we play music together.”

Abelin is an alchemist of sorts. With “Music:Eyes — See what you Hear,” he co-created a music tech-ed start-up platform that melds animation with music to support education in the classroom and the concert hall. Since its creation, the platform has evolved into a non-profit association with international partnerships with such organizations as the Berlin Philharmonic, the European Union Youth Orchestra, Boston Philharmonic Youth Orchestra, Columbia University and the Deutsche Kammerphilharmonie Bremen.

He has performed with orchestras throughout Europe, including the Beethoven Orchester Bonn, the Musikkollegium Winterthur, the Ensemble Orchestral de Paris and the Orquestra Sinfónica Portuguesa in venues such as the Royal Festival Hall London, Teatro alla Scala Milano and the Odeon of Herodes Atticus in Athens. His enthusiasm for new, genre-crossing music led him to conduct world premieres by Gabriel Prokofiev and William Brittelle as well as Swiss premieres of works by Nico Muhly, Sarah Kirkland Snider, Fabrizio Cassol and others.

He studied violin at the Musik-Akademie Basel, Oberlin College, and Indiana University, earned an Executive MBA from the University of St. Gallen, Switzerland and later studied conducting at the Eastman School of Music and the University of Delaware.

Most recently, he has made headlines in Europe and the United States for co-founding the Ynight- Classical Music in Clubs Series and the Apples & Olives Indie Classical Festival. The latter of which, hosted in Basel, Switzerland, comingles classical music composers with indie musicians and bands from rock, pop and jazz.

Abelin recently moved to the Capital District from Switzerland. Outside of music, he pursues a taste for coffees and gelatos from all over the world. He particularly enjoys light Ethiopian single-origin brews and Stefino Gelato from Bologna, Italy. When prodded by a joke that he made a mistake moving away, he laughed. “It’s very beautiful here, as well,” he said. “I’m stunned by what I discover here, it’s gorgeous. There’s skiing here, too. And it’s good.”

He said he was lured away by ESYO’s reputation as an incubator for young musicians. He sees the opportunity to pair them with dancers, actors and artists to shape a unique form of expression through improvisation.

“Etienne stood out from a global pool of conductors as an extraordinary musician, an inspiring educator, and a visionary in the field,” said ESYO’s interim Board Chair Omar Williams. “He is creative, dynamic, and thoughtful. His holistic approach to music-making creates a culture of belonging and inclusion that is at the core of ESYO’s mission.”

Abelin plans to take another approach, his “Music NOW” concept that illustrates powerful stories and profound emotions across different communities through music in a way that can’t be glossed over.

He describes music as a creative space that has room for all “caricatures.” Instead of attempting to connect similarities between cultures, he sees room to retain all of the emotions to introduce a mutual understanding of one another.

“The key in music-making, and perceiving music, is listening,” he said. “That’s such an important quality that gets lost when there’s a lot of screaming. But, that also challenges us as musicians because we can scream as well.”

Abelin will lead the Symphony Orchestra at the 2022 Playathon, ESYO’s musical marathon event at Crossgates Mall on Saturday, March 26. After which, he will make his debut ESYO performance on Sunday, April 3 at the Troy Savings Bank Music Hall.