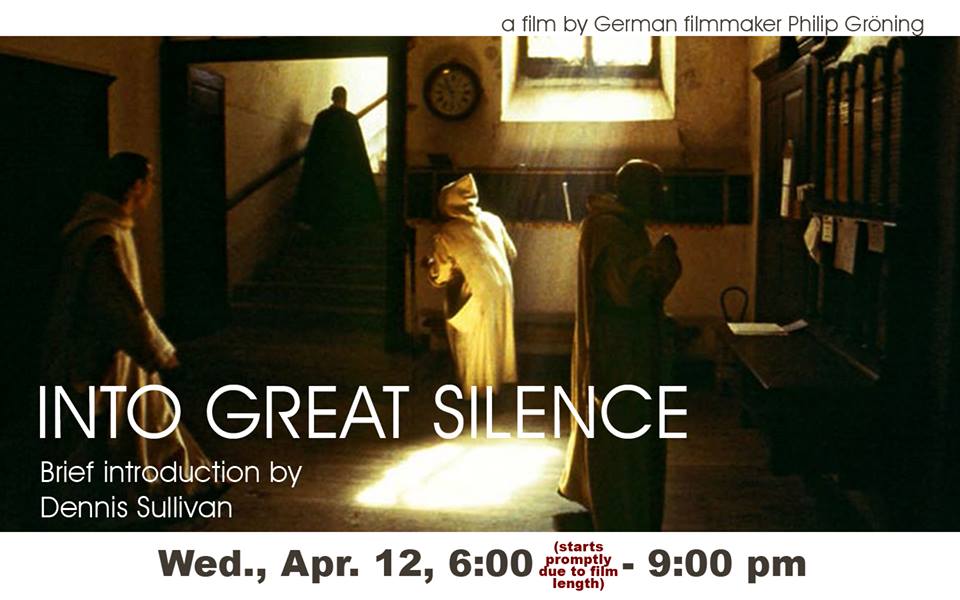 ‘Into Great Silence’: A Film By Philip Gröning

VOORHEESVILLE — Join Dennis Sullivan and the Voorheesville Public Library for a viewing of this important documentary, a work of art depicting the everyday life of the Carthusian Order of monks.

Due to the length of the film, the viewing will start promptly at 6 p.m. on Wednesday, April 12.  Pizzas are being donated by Smith’s Tavern. Dessert and beverages provided by the Friends of the Library.

“Nestled deep in the postcard-perfect French Alps, the Grande Chartreuse is considered one of the world’s most ascetic monasteries. In 2000, German filmmaker Philip Gröning lived in the monks’ quarters for six months—filming their daily prayers, tasks, rituals and rare outdoor excursions. One of the most mesmerizing and poetic chronicles of spirituality ever created, “Into Great Silence” dissolves the border between screen and audience with a total immersion into the hush of monastic life. More meditation than documentary, it’s a rare, transformative theatrical experience for all”.(zeitgastfilms)

Race and the Constitution:
Challenging Private Discrimination in Housing, Jobs, and Daily Life

What does the Constitution actually say about equality? Which legal disputes about race have been resolved and which are ongoing?  On Monday, April 17 at 7 p.m., Stephan Haimowitz, J.D looks at racism in the U.S.

Key rights established by court rulings, as well as legislation and rights in operation will be examined and discussed. Issues will be addressed in their historical context, and the workings of the legal system will be explored.  The focus will be practical realities rather than theory.

Battle of the Bands at William K Sanford Town Library