Gen-Xer has no regrets missing Woodstock ’99, a volatile festival marred by crime and corporate greed 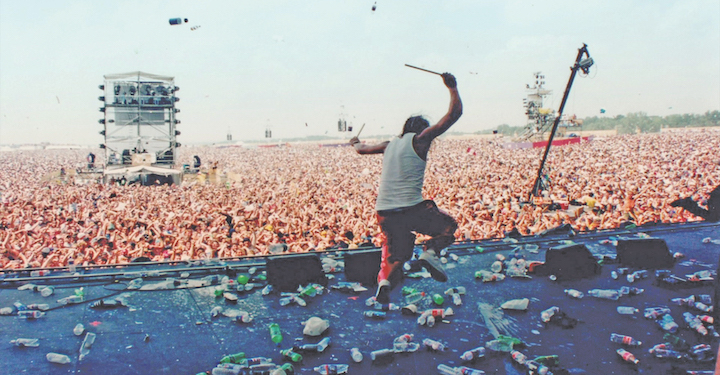 The Red Hot Chili Peppers, to some the last bastion of a sinking rock scene overtaken by Seattle’s grunge sound, writhed to the top of music popularity off Anthony Kiedis’ bare chest and long flowing hair. Though his tribal armband tattoo single-handedly sparked an unfortunate trend in body art, the band’s combination of punk, funk and rap took them from “Under the Bridge” to “Higher Ground” in 1992. They rightly headlined Lollapalooza that summer, and before kids returned to school that fall, dominated the MTV Video Music Awards.

However, my 1992 experience was caught up in everything related to Pearl Jam. Too many years have passed to allow me to accurately explain why I first picked up a copy of “Ten.” It was darker than what was popular at the time. With the crumbling of the Berlin Wall, we didn’t need to escape to the B-52s or Jesus Jones. There was honesty hiding behind Eddie Vedder’s baritone voice, and Michael McCready’s fuzzy guitar.

The alternative sound swept across the country with ripped denim, muted plaid and fuzzy bass riffs. The lyrics, if you could understand them, were full of an angst teenagers couldn’t quite put a finger on, but to which they inherently related. A young Generation X was coming out from the shadows of a decades-long cold war and a laughable anti-drug campaign defined by Nancy Reagan’s “Just Say No.”

Without Communist Russia to play the role of the Big Bad Wolf, political pundits turned their focus on corporate greed. My generation went from saving the whales to saving the rainforest after growing up under the threat of acid rain and a depleting ozone layer. An expanding media that reached out across the world never turned off. The visuals of global affairs were omnipresent in a 24-hour coverage telecast. My generation was labeled as apathetic and aloof by Baby Boomers, who not long before, similarly pulled away from conformity to set out on their own path.

Woodstock ’99 was a hard no for me. I’m a creature of comfort. I need to be assured that I can wash off the day in my shower and sleep in my own bed. For me, and many of my peers, there was always a polystyrene stench that wafted off of Woodstock ’99.

Online magazines are freshly shocked by the dirty details revealed in the Netflix documentary “Trainwreck: Woodstock ’99,” released in early August. As the Peace Dove flies, Rome is less than 100 miles away from Albany — it is, in essence, our backyard. The events from those three days have been known to us. When the new documentary doesn’t rehash the price gouging, the violence and the rapes, it reveals Michael Lang’s and John Scher’s feigned ignorance and their quickness to deflect responsibility for it all. That’s when the anger comes bubbling back.

Lang, the Woodstock patriarch who brought it all together in 1969, said he wanted to recapture that spirit of peace, love and harmony. What wasn’t said was that the spirit was lost under the sea of 350,000 bodies who attended Woodstock ’94 — with only 164,000 tickets sold. So he secured Griffiss Air Force Base, which President Bill Clinton closed four years before as his new site. With a fortified military base to keep out the riff-raff, Lang turned to Scher to build out a winning setlist.

Scher was a hot-shot promoter who grew into prominence by booking The Grateful Dead, The Rolling Stones and The Who at the 3,200-seat Capitol Theatre in Passaic, New Jersey. For Lang, he garnered all of the popular musicians of the day, including players from the burgeoning nu-metal scene. Korn, Rage Against the Machine and Limp Bizkit may not have fit Lang’s party theme, but neither did Nine Inch Nails or Rollins Band five years before. They nonetheless ushered in a different, volatile audience, who Scher invited and would later point many of his fingers at.

The documentary is rich with subtleties, and they are heavy between the two organizers. Lang passed the music duties to Scher. When the music got too rowdy, Scher blamed the musicians. When the audience protested against the conditions, he pinned it on a generation unwilling to grow up. Disregard the environment he and Lang helped create; a failed infrastructure and the lack of basic amenities — all byproducts of corporate greed.

Lang, who died a few months after he was interviewed, was meticulous with his answers. He met each question with unwavering eye contact and a hint of a smile. He prefaced each answer with a pregnant pause. If he had worn a Brooks Brothers suit, his demeanor would be mistaken for the head of a Fortune 500 company. Instead, he came off as Country Smart; only speaking of what he knew, what he wanted, and shrugging off the rest.

In 2016, I approached Lang to ask him about his plans for the 50th anniversary of the original Woodstock festival. News had already circulated in national magazines. Local outlets started speculating as to where he’d go next, with a heavy hint of NIMBYism. Rome was already a hard no. I was surprised by his quick response. He answered back, providing his personal email address, and asking ahead of time for my questions. After explaining my conversational style, I shared that I would ask about Woodstock ‘99.

He never answered back.

The writer is editor-at-large of Capital District Family Now.