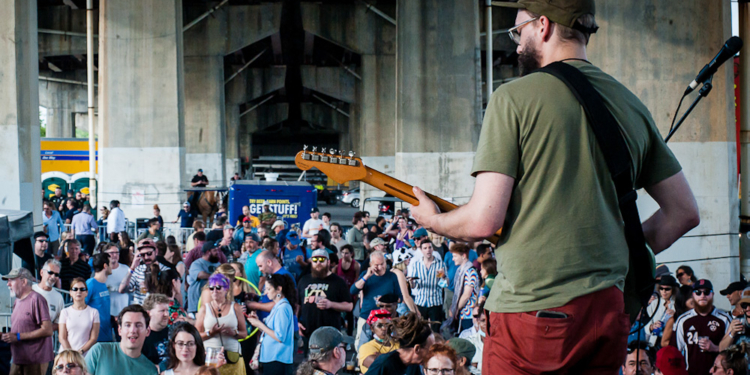 ALBANY — “How’d we sound,” asked Luke Malamood as his band cleared the stage following their Alive at Five set. The only appropriate answer was “good,” as I’ve often responded. “I don’t see how,” saxophonist Jeff Nania answered back. It was the band’s second performance — and Nania’s first — since playing Putnam Place shortly after COVID restrictions were lifted.

“Feels So Good” was still playing on in my head, an earworm planted since the band released the single three years ago. Despite the time that’s past, it’s still a fresh song to live crowds. Last year was a reset button that was pushed and set things back. Wednesday’s show was still the first for many. After an abbreviated opening night and a second show featuring Amy Helm, this third week was even a first for Albany Mayor Kathy Sheehan.

Hartley’s Encore took up the entire stage with a three-man horn section, two drummers, a guitar and a bass. If there was a mistake among any of them, it wasn’t detected by anyone from the crowd. People came for the high energy, and the band provided it.

Wednesday night’s crowd was once again perched under the interstate. A beautiful sunny afternoon was hijacked by rain just prior to 5 p.m., making an honest person out of meteorologists who forecasted for precipitation earlier.

Yam Yam took the Cap City to church with a healthy complement of jazz, funk and soul. The five-piece band out of Harrisburg, Pennsylvania featured the sound of Mike Dempsey’s Hammond layered over the bass play of Xander Moppin, the saxophone of Jason Mescia, guitarist Tom Fuller and drummer Tyler Fuller. The band charted its self-titled album in late 2018, with a No. 17 rank under the Billboard Jazz Albums. It’s scheduled to release its second studio album in mid-2021. The crowd appeared to enjoy their rich sound captured underneath the concrete and iron cathedral of I-787.