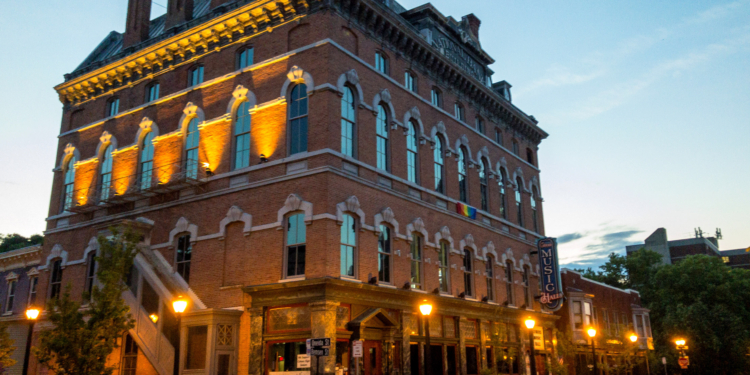 COHOES — When Playhouse Stage received the management contract for Cohoes Music Hall in July 2020, there were conversations and concerns about what was to come for the historic venue. Now, a full-year later — courtesy of COVID-19 — Playhouse Stage is able to put their plans into action; this summer will be the in-person debut of this transition from residents to management.

The new agreement is symbiotic, allowing for Playhouse Stage and Cohoes Music Hall to flourish while the fiscal burden is lifted from the city’s shoulders. As managers, Playhouse Stage no longer needs to pay rent to a higher-up and is able to focus on putting ticket sales toward generating revenue, while also paying the city $2 per ticket sold in exchange for utilities and general upkeep. This makes it so the Hall is able to operate at zero cost to the taxpayer, as opposed to past seasons that cost the city approximately $200,000 annually.

Additionally, there is the added benefit of Playhouse Stage obtaining more creative freedom to help the Hall grow while preserving its traditional offerings.

“For the last few years, there’s been a complementary nature just to having a space to perform in,” said Park Playhouse Producing Artistic Director Owen Smith. “But now it’s really a space to call our own, and to monetize, and to help make our work more sustainable than it’s ever been.”

It is Smith’s priority to ensure a diverse lineup of shows that will attract audiences who may have never been to the Music Hall before. He explained that one of the concerns that arose following the announcement of Playhouse Stage’s selection was that the company would only feature musical theatre performances, and that favorite events like live music and stand-up comedy would leave with the previous management.

Neither Park Playhouse nor the Music Hall is known for putting on plays, so Smith decided this was a hole that needed to be filled by offering non-musical theatre events. Casey Polomaine and Aaron Holbritter provided the perfect solution to this problem, and so it was announced last month that their company Creative License Theatre Collective will be joining the Music Hall.

The company has been a part of the area’s theatre scene since 2014 when the idea was first conceived by Polomaine and Holbritter. For the past seven years, they have been putting on plays at the Albany Barn, but the increased space and resources that accompany their residency at the Music Hall will make many more shows accessible for them to produce.

Creative License will put on two shows this season at the Hall: Significant Other from Nov. 12-21, 2021 and God of Carnage from May 6-15, 2022. Although Polomaine and Holbritter tend to gravitate toward darker themes in their productions, Significant Other is a lesser-known romantic comedy that they hope will bring joy and humor as a way to reconnect with audiences after a particularly difficult year.

Their shows will be joined by a full lineup of events at the Hall, including Playhouse Stage’s production of Alice in Wonderland, stand-up comedian Nick DiPaolo, and the Simon & Garfunkel Songbook Show.

As is the case for many businesses trying to adjust to a sense of normalcy, Smith said the uncertainty of the year has been one of the biggest challenges.

“I mean, just getting back into the rhythm and the flow of doing something is as crazy as building a theatre in the middle of a park and then running a musical theatre production there for a month,” said Smith.

Since the state’s attendance capacity guidelines changed just last week, Playhouse Stage has had to “pull the trigger” to prepare to open at full capacity. However, as Smith pointed out, this is the best case scenario for the company, so the waiting was worth the reward.

But the show must go on, and Playhouse Stage is prepared for a great season, and a great future, at the Music Hall.

Ian Knox: ‘Honored’ to be next principal at Hamagrael Elementary