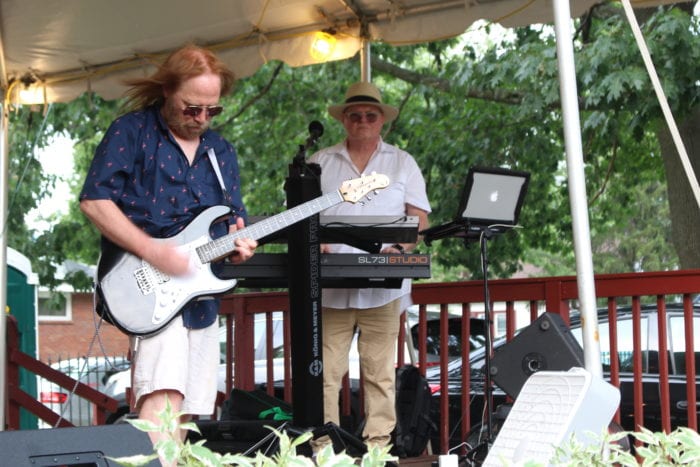 This was the first time patrons of the local favorite concert series were in attendance to watch “The Broken Hearted: Tom Petty Tribute” perform on the Neil Kellerman stage, much to the delight of Tom Petty fans.

Although it has been two years since Petty’s untimely death, his music and legacy continue to live on through his beautiful interpretation of his music as seen and heard from “The Broken Hearted: Tom Petty Tribute”. This local act, who recently headlined the 2019 Rockin’ on the River Concert Series for “Sly Fox and The Hustlers” less than a few weeks ago, is the real deal when it comes to paying homage to this rock and roll legend. This group features members, Frank Affinito (drums/backing vocals), James “Jimmy” Cappello (bass/backing vocals), Johnny Clifford (guitar/harmonica/lead vocals), and Matt Donnelly (piano/vocals).

Even though their gig was cut short in their second set due to the intense thunderstorm and lightning that came tumbling down in rage, “The Broken Hearted: Tom Petty Tribute” put on an entertaining, fun show for their audience. Within their short set, the band paid homage to their musical hero through their interpretations of Petty’s songs, “You Wreck Me”, “Learning to Fly” (an acapella version with Clifford on vocals and Donnelly’s beautiful piano leads and solos), “You and Me”, “I Won’t Back Down”, “Break Down”, and “Walls”.

Apart from his solo material and his involvement with “The Heartbreakers”, Petty was involved in another established group, “The Traveling Wilburys”. Petty was known in that arrangement by his alias, Charlie T. Wilbury Jr. Through the sounds and delivery of Clifford’s Rickenbacker guitar, harmonica solos, and his vocals, along with Donnelly’s Roy Orbison side vocals, delivered on their cover of the Wilbury’ s hit, “Handle with Care”. The harmonies heard among the entire band was impeccable, incredible!

The Byrds had a major influence in Petty becoming a musician. Besides it being a favorite song of Clifford and a song that Petty would perform at his shows, the group concluded their opening set with their take on “So You Wanna Be a Rock and Roll Star?”, a Byrds and Petty classic that had their fans dancing and their phones recording their set with just the palm of their hands.

One could close their eyes and open their ears and believe the vocals being sung were coming from Tom Petty. Open your eyes again and they are coming from the vocals of Johnny Clifford. From the blacktop hat, the arrangement of multiple guitars, and the Petty-esque vocals, Clifford, in his full persona, channels Petty through not only his looks but through his songs with the support of his band. Together, they paid homage to a man who continues to leave an impact on their fans and themselves. even though his life has ended; his legacy will remain in our “Petty” hearts forever.

BETHLEHEM LIBRARY: All about the books