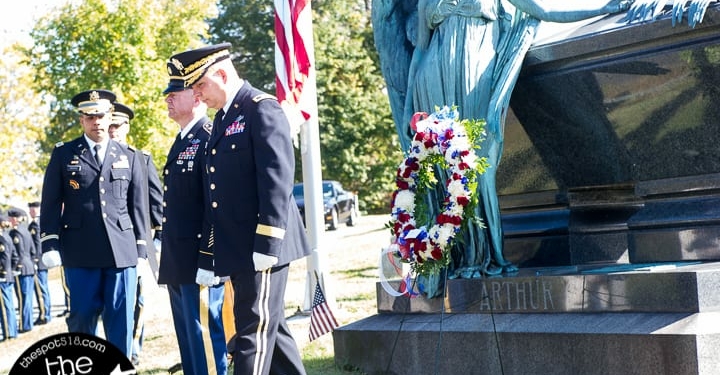 MENANDS – The New York National Guard said “Happy Birthday” to Pres. Chester A. Arthur on Thursday, Oct. 5, by laying a wreath at his gravesite at the Albany Rural Cemetery.

The wreaths are from the current president to former presidents.

Arthur was a former school teacher in Vermont, a lawyer and a Republican politician who became president on Sept. 19, 1881 when Pres. James Garfield died from a gunshot wound delivered by an assassin on July 2, 1881.

He served in the New York National Guard, when it was known as the New York State Militia, where he served as the judge advocate general. He was elected vice president in 1880.

During the Civil War, he was appointed quartermaster general of New York and was responsible for equipping and transporting 70 New York volunteer regiments totaling some 70,000 soldiers.

He was born in Vermont, lived in Hoosick Falls and attended Union College.