SPOTTED: The Colonie Memorial Day Ceremony at The Crossings 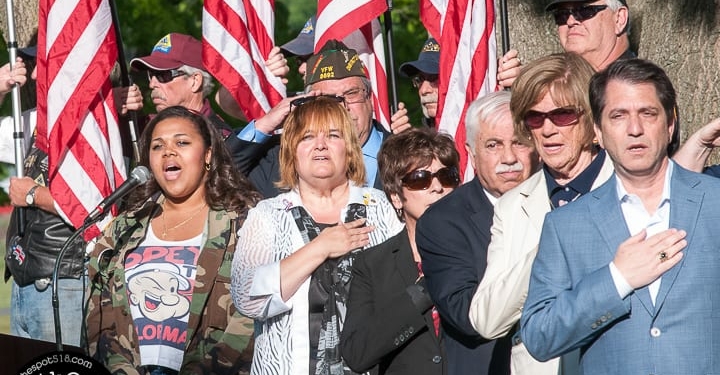 COLONIE – The town’s Veterans Memorial Committee held its annual Memorial Day ceremony on Wednesday, May 24 at The Crossings.

Front and center during the ceremony was the Fallen Comrade Table to honor soldiers missing in action.

Who set the first table is unclear.

There are those who believe it was started by the Red River Valley Fighter Pilots Association, a now formal organization of pilots who flew missions over the Red River Valley in Vietnam. While there is no concrete proof of that hypothesis, the pilots are widely credited for bringing the ceremony back to the states when the war ended.

The table is found at VFW and similar posts across the country, military bases and is often at ceremonies like the one in Colonie.

The script – read Wednesday by Jerry Perry of the J.E. Zaloga Post 1520 American Legion – is a variation of the following:

The table before you is a place of honor. It is set for one. This table is our way of symbolizing the fact that members of our profession of arms are missing from our midst. They are commonly called POWs or MIAs, we call them “Brothers.” They are unable to be with us this evening and so we remember them.

This Table set for one is small — Symbolizing the frailty of one prisoner alone against his oppressors. Remember.

The Tablecloth is white — Symbolizing the purity of their intentions to respond to their country’s call to arms. Remember! (ring bell)

The single Red Rose displayed in a vase reminds us of the families and loved ones of our comrades-in-arms who keep the faith awaiting their return. Remember! (ring bell)

The Red Ribbon tied so prominently on the vase is reminiscent of the red ribbon worn upon the lapel and breasts of thousands who bear witness to their unyielding determination to demand a proper accounting of our missing. Remember! (ring bell)

The Candle, the candle is lit — Symbolizing the upward reach of their unconquerable spirit. Remember! (ring bell)

A Slice of Lemon is on the bread plate to remind us of their bitter fate. Remember! (ring bell)

There is Salt upon the bread plate — Symbolic of the families tears as they wait. Remember! (ring bell)

The Glass is inverted — They cannot toast with us this night. Remember! (ring bell)

The Chair — The chair is empty. They are not here. Remember! (ring bell)

Remember! — All of you who served with them and called them comrades, who depended upon their might and aid, and relied upon them, for surely, they have not forsaken you. Remember! (ring bell)

Remember! — Until the day they come home, Remember! (ring bell)

According to the Department of Defense POW/MIA Accounting Agency there are more than 82,547 soldiers missing in action with 73,057 from WWII, 7,747 from the Korean War, 1,611 from the Vietnam War, 126 from the Cold War and six from Iraq and other conflicts.