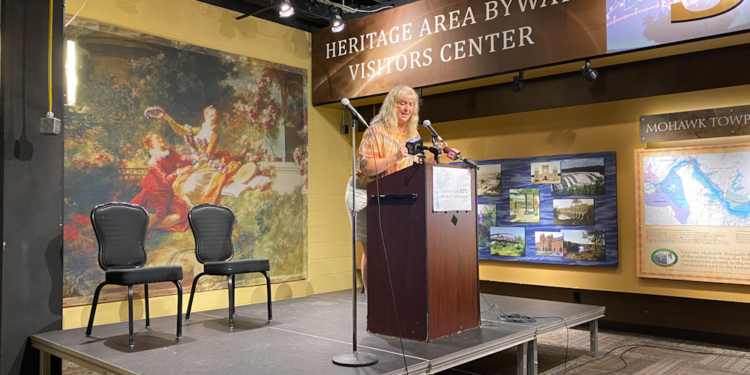 SCHENECTADY — On a day-to-day basis, direct support professionals are expected to perform a host of tasks: administering medication, preparing food, assisting with laundry, accompanying clients on outings and appointments, administering insulin injections, and forming relationships with those they support. Though it’s a field that attracts dedicated workers fueled by their passion and commitment, the paycheck of $12.50 an hour has made it an impossible career for many New York DSPs.

For Cindy Barkowski, a mother whose 27-year-old son has received services from ARC since 1999, the labor shortage is both disheartening and devastating to families and workers alike.

“One mom got up there and spoke yesterday — her son is in a residence — but she said the turnover is so bad that he calls the people ‘lady’ and ‘sir’ because he can’t keep track… they’re coming and going so quickly,” said Barkowski.

This is consistent with state vacancies as reported in the July 2021 New York Disability Advocates Report. From “pre-pandemic” through Jan 1, 2021-April 1, 2021, there was a 74.3 percent increase in the staff vacancy rate statewide. The reported staff turnover rate is 11.90 percent.

“It limits their lives,” said Schenectady ARC Executive Director Kirk Lewis. “They have to get to know new people — they have to basically train new people into who they are, and what they need, and how they want to be supported.”

The work shortages and high turnover rates means that the remaining staff needs to put in extra hours that they wouldn’t have otherwise been responsible for. Barkowski shared that her son’s Community Habilitation Worker had to cancel the Friday after the rally because she had maxed out her hours for the week with other clients.

“The staff obviously hasn’t been able to be here because they’re working 60 hours a week and they don’t have the time to come in… they need to go where the need is greater so I understand that completely,” said Barkowski. However, she continued on to say that her fear going forward is that her son will get less and less time with his DSPs.

This devaluation of DSP work remains the root of the issue, Lewis pointed out, and he noted that it further perpetuates the oppression of two groups. Firstly, it continues the historic discrimination that those with disabilities are faced with. Secondly, it specifically devalues women, particularly women of color, who are frequently seen in DSP roles. Lewis noted that “an overwhelming majority are women and probably a disproportionate number are women of color.”

Lewis directed his message to the legislature and the Governor, “Recognize our people. Recognize the people we support. Recognize the great work that our direct support professionals do,” he said.

This recognition from the government will be demonstrated through funding. Lewis, Barkowski, and Assemblyman Santabarbara all echoed the same sentiment. The issue cannot be fixed with one-time funding, but instead requires a long-term commitment.

Assemblyman Santabarbara, whose 19-year-old son has autism, expressed his disapproval of Governor Cuomo’s “nonexistent” record in increasing funding to DSPs.

The assemblyman also pointed to the federal government, particularly to the Better Care Better Jobs Act. This bill would provide funding to states for direct care, as well as allow for the funding to then go toward specific organizations like Schenectady ARC.

“This is an investment in people, this is about community, so I don’t know what the governor’s reasoning can be that he wouldn’t want to invest in this,” said Santabarbara.

Coming out of the pandemic, workforce issues were augmented across the country in nearly every field. For organizations like ARC, however, it has become more challenging to incentivize minimum wage pay for a highly demanding job. And leaders like Lewis know that their workers deserve better.

“What was a challenging, bad situation before the pandemic has turned into a crisis in the pandemic,” said Lewis.

“It’s about giving people new opportunities, independence, and I’ve seen it first-hand,” said Santabarbara. “It’s invaluable work, you almost can’t put a price on it, and the fact that they’re getting paid right around minimum wage is just unacceptable and it’s embarrassing for the state.”

More information on Schenectady ARC can be found at https://www.arcschenectady.org/.

One New York governor was impeached, more than a century ago