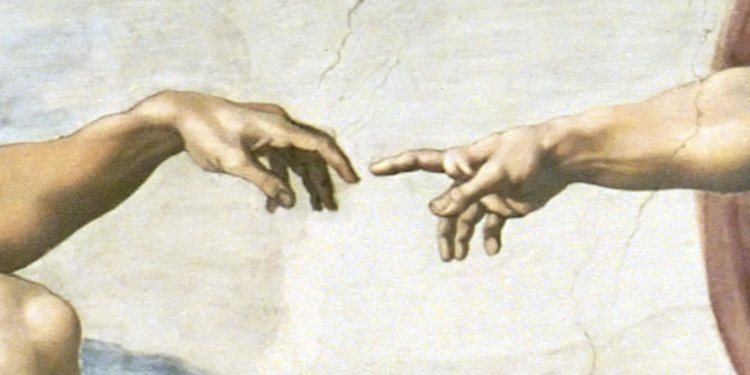 ALBANY — The Sistine Chapel, as a part of the Vatican Museum, shut its doors to visitors in March 2020 for nearly three months due to COVID-19. The hands of Adam and God extended over an empty room, the Last Judgement adjourned.

It was unprecedented and devastating.

In a normal year, the chapel would welcome some five million people. But following the longest closure since 1943, the museum was left in a state of uncertainty. Michelangelo’s famous frescoes became a daydream for tourists and art lovers alike.

Even with the reopening of the museum, the Sistine Chapel isn’t a common day trip for most, and so it remains a distant wish. But what if a visit to Rome isn’t needed to see these awe-inspiring paintings?

The Albany Capital Center is featuring the exhibit “Michelangelo — A Different View.” The exhibit opened Thursday, July 29, and runs to Monday, Aug. 23. The traveling exhibit is the only display of the Sistine Chapel’s paintings to be certified by the Vatican. Images captured on photo slides between 1982 and 1994 of the chapel were used to create reproductions that were then transferred onto fabric webs.

The experience of stepping into the Sistine Chapel will never be able to be replicated, but this exhibit allows for it to be enjoyed up close. There is no rush, but more importantly, there is no distance between the viewer and the art. The ability to stand just a few feet from the paintings allows for a different kind of appreciation.

It becomes even more impressive when each fresco can be looked at as an individual work of art, rather than as a part of the whole. To highlight each story that Michelangelo tells through his paintings, the exhibit features an audio tour that explains exactly what each frame is depicting. Though most people know the general story behind the Sistine Chapel’s ceiling and walls, the audio provides a much deeper history that demonstrates the level of thought put into each detail.

Every inch, especially in “The Last Judgement” is so intricately designed that it would have taken some painters a lifetime to pull off, but Michelangelo did it all in just four years.

The highlight of the exhibit lies in the main room of the Capital Center, since it is where Michelangelo’s ceiling is displayed on the floor. Walking along either side offers a different story, and a different perspective. It is one thing to look up at “The Creation of Adam,” but it is another to be able to see the individual brush strokes in God’s beard or Adam’s fingertips as you look down toward them.

The opportunity to view these frescoes at such a close distance is one that doesn’t come around often and might not come around again once this exhibit closes its doors. Learn the stories behind the frescoes of Delphica, and Esaias, and Libica.

Tickets cost between $8 and $17, and can be purchased at albanycapitalcenter.com.