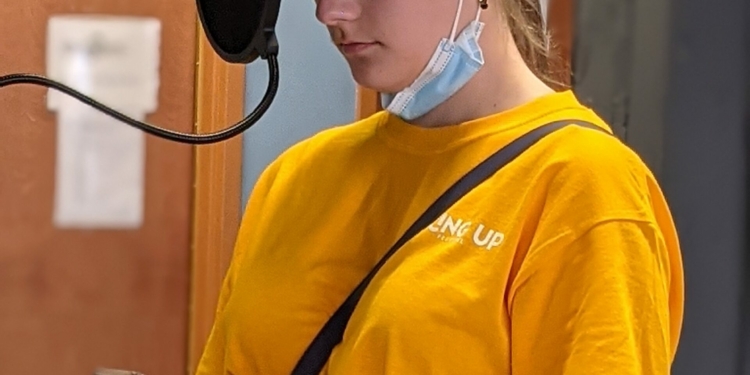 ALBANY — Despite Empire State Youth Orchestra’s (ESYO) Young Leaders program only being in its second year, the program’s young musicians are already making an indelible mark on Albany’s footprint.

ESYO’s youth, led by Bethlehem Central High School senior Emma Edgar, created a soundwalk exhibit, which premiered on Memorial Day weekend. The exhibit will showcase through the summer; in the project, Edgar and her peers created an accompanied walk through Washington Park. Edgar’s team did everything from commissioning the composers — high school students as well, by the way — to marketing the project, including navigating the software needed for the walk and working with mentors and teachers alike to make all of the moving parts a reality.

“The vision and scope of this project is so impressive,” ESYO executive director Becky Calos said. “The best part of this was seeing these musicians really step up into these adult roles and watching our adults work with them on the same level. Everything, right down to navigating financial compensation and the nitty gritty of hiring people, was done by Emma and her team.”

A soundwalk is an immersive audio experience curated to accompany a walker as they stroll along various nature trails, increasing appreciation for their natural surroundings and their local park. The Washington Park lake trail was categorized into sections by the soundwalk team. As a walker passes through each section, the music changes to match the particular sections of the trail. Young composers from ESYO and guest artists composed pieces of music for specific parts of the trail, highlighting its features. In addition to the focus on nature, some pieces will center on the significance of Albany’s heritage, both Dutch and Native American. This Soundwalk will allow walkers to be aware of their surroundings and experience the remarkable collaboration of nature and music. Just as the pieces of a puzzle fit together to construct a beautiful picture, the Soundwalk will permit technology, music, and nature to come together to create an unforgettable experience for each walker.

Edgar said the creation of her project was inspired by the recent soundwalk done at Saratoga Performing Arts Center and New York City’s Central Park. Both projects were manned by Ellen Reid.

“This soundwalk is an important project for so many reasons,” Edgar said. “I joined ESYO and the Young Leader program because I wanted to make music with other dedicated young musicians like myself, and now, I want to give that opportunity back to the community. A park is a place that brings people together, and I am reaffirming that statement through this music.”

Edgar said the project was a great outlet for her to learn many of the skills she will need in college and beyond. While the musician will major in computer sciences at college, she understands the impact music has on each field in the world and how the ability to write contracts, commission people and make projects a real thing will only lend her well.

“My mentor and I worked together on how to make all of these different components come together,” Edgar said. “I think the biggest surprise of the whole journey was how many different things I had to work on. But it wasn’t work; I loved each moment of this journey and the rush you get from making all of these parts move together was second to none. If I do nothing but soundwalks for the rest of my life, I’ll be very happy.”

Perhaps the most intricate part for Edgar was working with available technology; because the students went from concept to execution in three months, there was not enough time to create an app specifically for Washington Park. Edgar was forced to resort to existing software, which presented its own set of learning curves. Because the software refuses to change tracks until the previous track is done, even if the user walks into a different part of the exhibit, Edgar was tasked with having commissioned artists create pieces within a certain time frame.

“My team and I actually walked through Washington Park and timed each leg, and from there we had the composers create based on that pace,” Edgar said. “This software isn’t meant for soundwalks, so next time I do something like this, I would love to create an app or program specifically for this type of activity.”

Calos, Edgar and a bunch of the team walked through the finished product this weekend on their own time. Calos said she’s beyond impressed with her students’ feat, while Edgar was ecstatic at how well each piece ended up fitting into their purposeful places.

“I don’t think I’ve ever met a student with more professionalism or organization than Emma,” Justin Cook, ESYO’s marketing and publications manager, said. “I’ve worked with kids most of my career and she’s brilliant. I think what really sticks out is how I didn’t negotiate contracts like these until I was in my 30s. Emma did it and she’s in high school.”

FROM THE EDITOR’S DESK: What are your credentials?