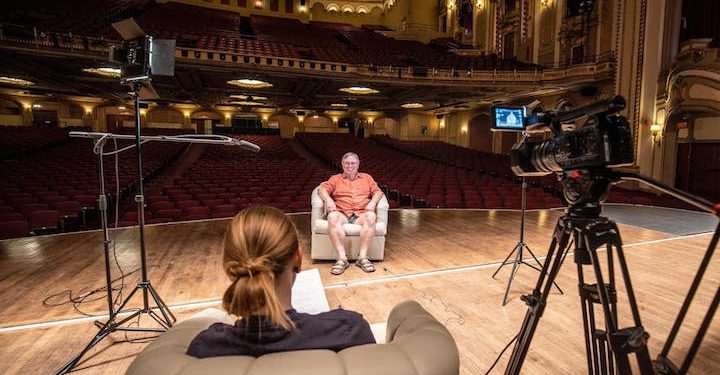 ALBANY — On December 17th, The Palace Theatre will premiere a new documentary, “Grapplin’ Greg: The Story of Greg Bell.” The documentary is directed by Frank Cavone and centres around local music promoter Greg Bell’s life and legacy.

The documentary is titled after an Eastbound Jesus song that pays homage to Bell. In addition to the documentary, attendees will get to enjoy the band performing live music at the premiere. Tickets are available at palacealbany.org.

During the pandemic, Cavone collaborated with The Palace and the City of Albany to create “The Palace Sessions.” He was freshly inspired to create a new documentary after his previous one explored various urban landscapes.

For his new one, he said that he “wanted to do a documentary that had a good story; I thought Greg had a great story. I felt that there was enough to be told, and this city has history with him.”

He had met Greg Bell at Bell’s shows that he promoted. As Cavone eagerly photographed and filmed, Bell remembered his enthusiasm for music. Cavone made it a point to speak to Bell. About three years ago, Cavone approached Bell with the idea for his documentary.

Bell responded to the concept with his signature wit and good humor. “I told him to knock himself out.”

Cavone began interviewing friends and family; Bell’s legacy as a music promoter and with Guthrie Bell productions has had an expansive community effort. “Personally, I’d rather hear what other people have to say and hear their perspectives,” said Bell.

“Nothing I’ve done has been in a vacuum,” he added. “It’s been a community effort to do what I’ve done over the years.”

“What really makes me happy about this documentary is that when you watch it, it’s almost like other people are telling the story for him,” said Cavone. “It’s really heartwarming.”

Co-producer Kim Neaton streamlined the process as Cavone had to narrow down a list of 200 suggested interviewees. The Palace became one of the interview locations, making it a fitting home to debut the documentary.

Bell has been doing shows at the Palace since 1998. He explained their relationship as “more of a friendship than a business relationship.”

His shows at the Palace are part of the landscape of Albany’s music scene. Cavone commented that what makes going to a Bell show special is that it is like a “family outside a family.”

“Being able to premiere the documentary at the place where he brought so many memories in through those doors— I can’t wait,” said Cavone.

“We jumped at the chance to be able to host it here and spend an evening honoring a great local promoter and music lover like Greg Bell!” said Sean Allen, Director of Marketing for the Palace.

Allen has known Bell personally since 2003; he recalls Bell’s loyalty to his bands and keen ear for excellent music. “Greg has brought so many incredible shows to our stage over the years that it’s only right that we put him up there in lights for a change,” said Allen.

For Bell, it’s a collaborative process that builds the foundation of his story. “It’s been a community effort, everybody working together to help benefit the Albany music scene and the public,” he said. “That’s what it’s all about, bringing people together and providing people with good music and fun people to hang out with.”

Cavone didn’t plan for Grapplin’ Greg to premiere the same year as Greg Bell’s 30th year of promoting, but the timing was serendipitous. “Greg should be honored, especially in his 30th year,” said Cavone.

“More than anything with this documentary, it’s awesome to be able to do something like this, but it’s even more of a privilege for Greg to let us go down this road and tell this story,” he continued.

Point of View: Drop the municipal leaf pick up