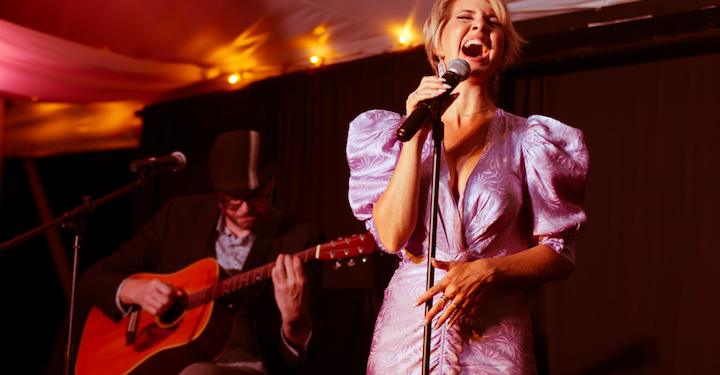 ROCK CITY FALLS – Jeff Wodicka, co-owner of The Mansion of Saratoga, calls his 801 Concert Series the “best-kept secret in town.”

The name of the series is derived from the mansion’s address, 801 Route 29. It’s a few miles drive into the sweeping rural settings west of Saratoga Springs. It’s a bit of respite from the city’s traffic-choked streets from the usual summer crowd.

Each year, the Mansion pulls talent straight from Broadway to sign on its shallow stage, just feet away from dinner tables. Morgan James just recently performed. She made her Broadway debut performing in “The Addams Family,” starring Nathan Lane and Bebe Neuwirth. She since dropped three studio albums and just as many cover albums featuring songs by Nina Simone, Joni Mitchell and The Beatles. She’s sung on Broadway, the Lincoln Center, and now, the Mansion.

This year marks the series’ seventh year, but entertaining guests on the rear deck is somewhat new. When the pandemic hit, he moved the tables outside so guests could be socially distanced, cabaret-style on the great tented rear deck overlooking the rose gardens. It’s one of several places on the grounds from which Wodicka and Neil Castro host weddings.

Rick Bieber, the Mansion’s executive chef, stepped out during one of the first shows and told Wodicka he liked it. As he recalled the story, Wodicka’s eyes grew big with a smile, “Yeah. This works.” The outdoor room seats up to 130 guests, and Wodicka said it is similar in size and spirit to Feinstein’s / 54 Below on W 54th Street in New York City. When asked what kind of grief he receives from neighbors over the amplified music, he said, “There aren’t any.”

For the price of admission, guests taste from a menu Bieber arranged. Bieber. The Cordon Blue chef joined Wodicka and Castro shortly after the two bought the Victorian Aged mansion in 2001.

The high-end Italianate Victorian is the former home of George West, the Paper Bag King. Wodicka and Castro first planned to restore the home to its original grandeur and run a bed & breakfast. They opened it as The Mansion Inn Bed & Breakfast for Memorial Day 2002.

Working with noted interior designer Mr. Edward DeRocker, the two spent time converting what was a plain-looking, yellow and white structure to a multi-colored “painted lady,” much like it would have been in 1866. The interior walls now feature shades of gold, lipstick red and deep plum colors. The Mansion has since transformed from a bed and breakfast to an event venue, with Wodicka’s and Castro’s daughter, Lori Wodicka, and Bieber managing.

The Mansion opened Sunday Brunch for the racing season last week, which goes from 9 a.m .to 2 p.m. Restaurant Mondays continue every Monday night from 5 p.m. to 9 p.m. A 10% discount is offering to Restaurant or Hospitality Industry workers. Seating alfresco in the gardens or on the great tented deck.

Wodicka says this is the biggest and most exciting season yet. Tony Nominee Sharon McNight will become Sophie Tucker on July 21 as she brings her award-winning stage show to The 801. Finishing the month are the Tony Award-nominated Callaway Sisters, Liz and Ann Hampton Callaway, for two nights, July 29 and 30, with “Broadway the Calla-way.”

August and September bring the music of nightclub and cabaret star Nicolas King, Broadway’s Matthew Scott and the brilliant comedy of stage and TV star Judy Gold. Nicole Henry who electrified The Mansion’s 801 crowd in 2021 with her Whitney Houston tribute returns to present a concert based on her new jazz album “Time to Love Again.” The glorious baritone voice of Broadway’s Nathaniel Stampley (“The Color Purple,” “Lion King,” “Porgy & Bess,” “Ragtime”) promises to leave audiences in awe, and three-time Tony Nominee and Tony Winner for “Drowsy Chaperone,” Beth Leavel closes out the season.

Tickets range from $60 to $75. The doors open at 5:30 with Executive Chef Rick Bieber providing a bistro menu for those interested in dinner or snacking prior to or during the 8 p.m. performances. A full bar serves drink specials as well as beer and wine by the bottle or glass.

For tickets and information visit https://www.themansionsaratoga.com.