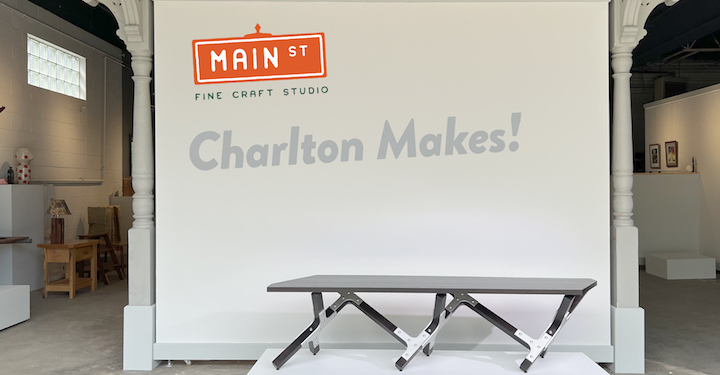 CHARLTON — Six miles down Swaggertown Road, one couple’s plan to convert a longtime volunteer firehouse into a workshop and art gallery has transformed into a showcase for this community’s proud, self-sufficient character.

Main Street Studio, located at 786 Charlton Road, will exhibit a pop-up show and market titled “Charlton Makes!” It’s to be a celebration of artists and makers with close connections to the small, talented community, and it falls in conjunction with the town’s Founder’s Day Weekend. The exhibit, featuring work from 33 artists, will run over two weekends, from Friday, June 3 to Sunday, June 5; and from Friday, June 10 to Sunday, June 12.

The show space is an example of what Jason and Dana Nemec call “rural industrial.” It is a clean, modern-style art gallery with white, painted brick walls and a black ceiling with exposed metal support beams. It’s as fashionable a room as you’d find in any cityscape. Yet, it’s converted from a century-old firehouse that, up until just two years ago, served this town of nearly 4,000 residents.

The Burnt Hills couple talked about moving to the West Coast now with their two sons going off to college. Pandemic-related shutdowns and a turbulent real estate market led to more questions than solutions. But when a real estate agent friend shared a listing of the property, Dana said, “Oh! This could be interesting.” They closed on the property a few months later in early 2021.

Jason had wanted to find a workshop to continue with his woodturning crafts. A software designer by trade, he said he was drawn into the art about 15 years ago, when he had vacation time with nothing to do. He attended a woodturning workshop in Colorado. He bought a lathe and steadily built up his collection of equipment ever since.

“I’ve been working in software for a long time — from before there was an internet,” he said. “It’s particularly taxing if you care about what you do, that every two to five years everything reinvents itself and all the rules change. Things that you made two or five years ago they’re literally, objectively not good anymore.

“Woodworking is a practice that results in things that last for generations.”

Jason grew up just a street down from the firehouse. He recites the town’s history. How its founders traveled north from Freehold, New Jersey. A point of distinction only because that’s what they initially named the town. How life was hard for pioneers, especially those who crossed native Mohawks the wrong way.

The history of the firehouse is documented in crude, endearing ways. “Fuji ‘95” is etched into the concrete floor that is now the gallery room. A few more initials can be found elsewhere. The Charlton volunteer firefighters kept the house well for more than 50 years. Like many rural firehouses, the size of modern equipment forced them to move out.

“We didn’t realize just how tight the volunteer fire department community is,” Dana said. “When we inherited this building, we also inherited five generations of all of the families who have put in the lighting, done the metalwork on the walls. We’ve met and become really good friends with a lot of the people who we probably wouldn’t have crossed with.”

When the Nemecs presented their plans for the building to town officials, they said residents were happy to learn of their want to preserve its history. Jason drew inspiration from the Saratoga Clay Arts Center. He observed how it offered studio space for artists, providing tools they wouldn’t necessarily have at home, all while providing gallery space to showcase members’ work. Jason felt it could “jumpstart” another artist’s creative efforts by providing a studio, a gallery, and class space under one roof.

“The town has been great. They’ve been so supportive,” Dana said. “Just the connections we’ve been able to make. I think, coming out of the pandemic, I think people needed that connection.”

Among the 33 artists to be featured in “Charlton Makes!” is a nonagenarian woodworker who settled down in Charlton 50 years ago; a native utensil maker now living in Maine whose work was captured in Bon Appétit Magazine, a high school student who aspires to be an artist, and a Galway sculptor who commonly has his work featured and sold across New York City.

The show promises a wide variety of mediums, from the aforementioned woodwork to oil paintings and photography. Soahn Kuehner, who creates guitars out of locally-grown gourds and flutes from invasive Japanese Knotweek, will showcase his work. Jason’s award-winning furniture will be on display, too. All in the effort to bring something tangible and worthwhile to one’s hometown.

“I love Charlton. … It’s a really cozy town,” Jason said. “It’s off the beaten track. I don’t know how that’s going to fare trying to get visitors here, but we’re going to take it one step at a time.”