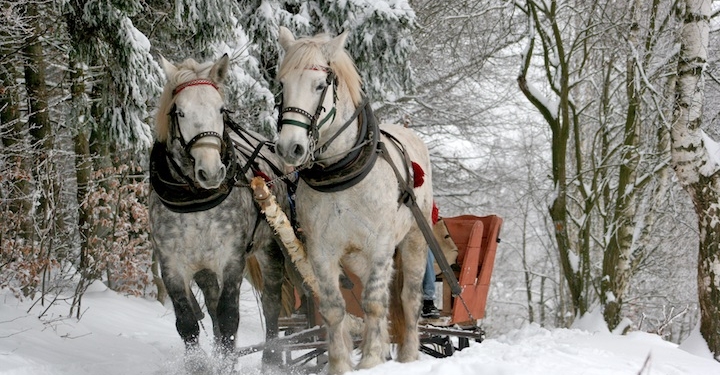 SCHENECTADY — Speaking with former ESYO Music Director Helen Cha-Pyo, we all may want to gift her a horse and sleigh this time of year. In 16 years, she hasn’t missed the chance to stand at the podium before an orchestra during the holidays.

“87 is my highway,” she said. Claiming ownership in jest for the roadway that takes her from her New Jersey home to the Capital District. “Unfortunately, I’ve got to know too many of the State Troopers in my 16 years,” she adds with a laugh.

The Empire State Youth Orchestra is set to take a live audience on a magic sleigh ride with Madison Vandenburg as it unwraps a new, orchestral arrangement of the recording artist’s new holiday single at Proctors on Sunday, Dec. 19.

Empire State Youth Orchestra, known regionally and nationally for engaging young musicians from upstate New York and western Massachusetts in a joyful pursuit of musical excellence, will perform “Sleigh Ride,” its 2021 Holiday Spectacular, in front of a live audience.

“Music is the best accompaniment to the holidays,” said Rebecca Calos, Empire State Youth Orchestra’s Executive Director. “The pandemic has challenged us all and kept many from seeing their families during the holiday season. We believe that our musicians and our community could use a magical sleigh ride and sparkling music to reignite the light and love of the holidays,” she continued.

The concert is to feature a sleigh full of talent, the newly formed ESYO Chamber Orchestra, the ESYO Youth Jazz Orchestra, and ESYO’s flagship ensemble Symphony Orchestra conducted by their longtime maestro, Cha-Pyo

Audiences are accustomed to seeing ESYO performing along with CBS 6 Albany’s annual Melodies of Christmas tradition. The global COVID-19 pandemic, however, has prompted another pause on the traditional concert this year.

National recording artist and 2019 American Idol finalist Madison VanDenburg is also to return home for the holidays to premiere the orchestral version of her new single, “The Light of Christmas,” with ESYO.

The concert program weaves together a seasonal story by Children’s Moonbeam Book award-winning author Vicki Addesso Dodd with sparkling holiday favorites, Christmas carols, and inspired Symphonic classics. After finding themselves aboard Santa’s sleigh, audiences travel the world seeing the holidays through the eyes of a child and the sounds of music.

“I think being in the spirit of celebrating something that is positive, I think no matter what the tradition that you come from, I think light is one common theme that creates warmth. Something that brightens the darkness of this world. Something that really shows us in certain ways where we should go,” said Cha-Pyo.

“I think it’s the theme of being together, sharing an adventure, experiencing something you can’t experience on your own, and that’s what orchestra is all about.”

Accompanying each scene is music like Leroy Anderson’s iconic Christmas jingle Sleigh Ride, Waldteufel’s Skaters Waltz, “Troika ‘’ by Prokofiev, and a jazzy arrangement of “We Wish You a Merry Christmas.” Also featured on the program is the famed holiday classic “(There is No Place Like) Home for the Holidays,” by Glenville-native Robert Allen. Exhausted from their sleigh ride, the children fall asleep and wake up on Christmas morning to hear the orchestral premiere of VanDenburg’s new hit single.  In the finale, the audience is invited to join VanDenburg for a traditional carol sing-along.

“I am so excited about that,” said VanDenburg, who is now home for the holidays after touring in support of her new single. “When they told me they were putting that together, I was like, oh heck yeah. Let’s do it.”

“The first thing I thought was that it sounded so timeless and classic,” VanDenburg said. “I’ve written a couple of fun Christmas songs before. That one was just special to me because it sounded so timeless. … I thought it would be kind of a perfect release, especially with what’s going on with the world. It’s been tough right now with COVID and we all need a song right now that reminds us that better days are coming.”

“If there is any kind of message that I can send out is that we really, really appreciate [live audiences],” Cha-Pyo said. “If they’ve never known to what extent the performers appreciate live audiences coming into the concert halls, this is the time for the musicians to let that message be loud and clear.”

The family-friendly holiday concert will perform at Proctors in Schenectady on Sunday, Dec. 19, at 3 p.m.

For tickets to Sleigh Ride| An ESYO Holiday Spectacular, call Proctors Box Office at (518) 346-6204 or buy online at esyo.org/tickets. Tickets are $25.