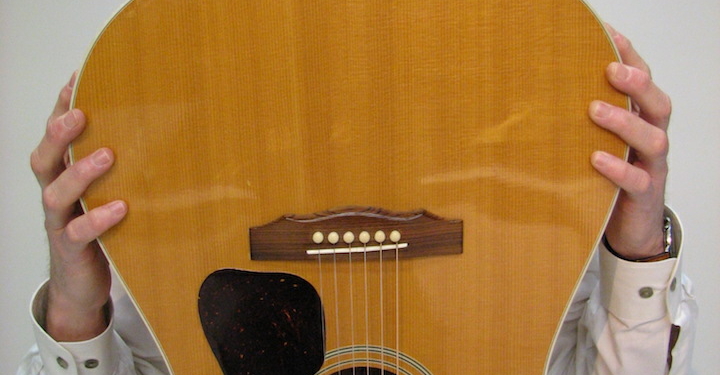 “I realized every year I come up with a great Christmas song by Dec. 15 which is too late,” Jacobs said. “It’s something I always wanted to do.”

However, the songs are not like the traditional Christmas songs you’ve heard before. The album mixes songs he has performed in his live act since 2001 with newer songs that have never been released.

Most of the songs on the album are parodies of classic rock songs like “Santa Claus is Coming to Rock You,” a take on Queen’s “We Will Rock You” and “Santa Claus is Coming to Town.” If the songs don’t follow the classic rock parody, they are comedic takes on real life experiences, like Jacobs’s song “Flat Santa” about deflated Christmas lawn ornaments.

“Almost everything that I write kind of in one shape or form comes from or is inspired by real life experience,” Jacobs said. “Or somebody says something and it becomes a great idea for a song.”

Jacobs grew up in Massapequa Park on Long Island, a place that’s given birth to other comedic stars like Jerry Seinfeld. Although Jacobs is a big fan of Seinfeld, he never really wanted to be exactly like the big name. Music was his first love, receiving his first guitar at 5 years old, Jacobs hasn’t really put it down.

“I played in bands for a long time, it got to the point where I wanted to do something different,” he said.

Jacobs went to his first open mic after making that decision and never looked back. He believes that the Albany area has really helped him with his successes, allowing him to jump in as a beginner and follow through.

After graduating from Ithaca College 1980 Jacobs moved back to Long Island, but soon realized he loved living upstate and moved to Latham in 1982.

“My wife, then girlfriend, was finishing her college and figured I’ll move up here for a couple years and then move back,” Jacobs said. “And that was 40 years ago”

Jacobs has been focusing on music comedy for the last 20 years, putting out four albums showcasing his clean-adult-act with songs like “I’m Allergic to My Job,” and “Wives for Dummies.”

“It’s something I enjoy, I like all kinds of comedy,” he said. “But for me, my persona lends itself to a relatively clean act.”

Jacobs finds that clean adult comedy rather than the usual dirty-adult songs allows him to do his act virtually anywhere, in front of anyone. He finds there are less people to offend while doing clean comedy, allowing him to find more audiences and more people to find him.

Sandy McKnight, a fellow comedian, singer songwriter, and producer worked with Jacobs on his second album, “I’m Allergic to My Job.” McKnight and Jacobs’ (it either has to be jacobs’ like above or jacobs’s. Doesn’t matter so long as it’s consistent) working relationship is full of trust and support of the other.

“He seems to trust my feedback, and we’re generally on the same page,” McKnight said. “Drew is an example of someone who is flexible, but also has firm comedic ideas and a good sense of who he is as an artist.”

An audience favorite off the album so far is “Strip Club Christmas Eve.” According to Jacobs, it is a song unlike any other he has performed. It is the most requested song in his playlist and received immediate positive reaction following its debut.

“A friend of mine who I would consider a relatively conservative person, loves it,” Jacobs said.

The album is now out and can be found locally at River Street Beat Shop in Troy for you to get in on the joke.

If there’s one thing that Jacobs has learned in the 20 years of doing musical comedy is that cutting too close to the deadline might give you an album.