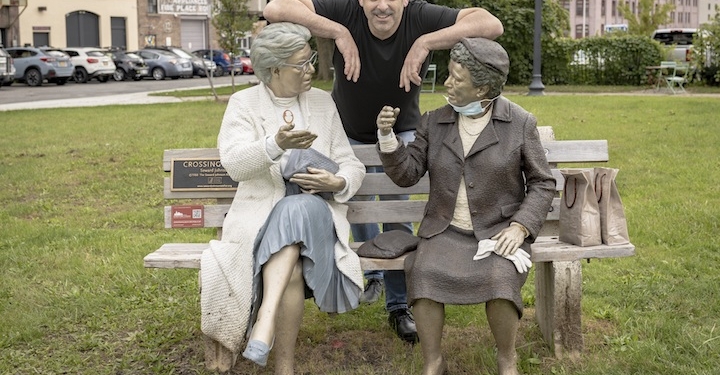 MENANDS – Eric Luper did not like reading when he was 10 years old.

Now he taps those memories of dislike to motivate him to write books that help 10-year-olds gain the confidence, the curiosity, and the sense of exploration that was missing in his early literary life.

“There were books that I gravitated towards. I liked ‘The Phantom Tollbooth’ and ‘Charlie and The Chocolate Factory,’” Luper said, “I try to write the books that I wish I had as a kid.”

His latest novel falls in line with the intensity of the books he read as a kid. Readers will follow the lives of cafeteria food in a war against office supplies from the principal’s office which, mirrors one of the many battles seen in HBO’s fantasy mini series “Game of Thrones,” where Luper took some pop-culture inspiration.

“It’s probably a first for me, but I hope that down the road I can keep that [pop culture influence] going with this series of books,” he said.

Although Luper has written 29 books, it’s not all that he does. He splits his time between writing and his chiropractic practice,  Peak Performance Chiropractic in Menands,.

While going to school for chiropractic, there was an introduction to creative writing class at Rutgers University that showed him how enjoyable writing could be while looking at other age groups.  It was a place where writing didn’t have to be an assignment, but rather something that opened the floodgates of past emotion.

“I think once I realized I was given the liberty to write whatever I wanted,” Luper said, “I liked it more than an assignment given by a teacher.”

Now Luper is busy adjusting spines and ideas about childrens’ food, — the two passions he has in life. Luper considers himself very lucky not to just have one rewarding profession, but two.

Looking back, Luper values the time when he was a first-time author.

“I would have it no other way,” he said, “I made some lifelong friendships that way.”

He said it felt like he was throwing 100 pages of  words over a fence then waiting to hear back from an editor, an agent, a publisher, somebody to see if it worked. Now, with more knowledge of the process, that waiting-game anxiety has dwindled, because not as much is going over the fence.

Even with publishing success, Luper still considers himself lucky, but doesn’t know if he’ll ever feel entirely confident.

Being a revisionist rather than an author

The real magic now happens in the revisions, after the chapters have sat for a while. Luper has found the best results come from writing a chapter and then puting it down for a while.

“Later I smooth that chapter out with a crowbar,” he jokes.

Luper understands it’s a part of human nature to be self-conscious of what you do in every form of creative expression. However, he’s learned as a writer to get past that. It’s easier to go back to the first draft and figure out the kinks of what he’s written, adding fun adventures and different twists and turns. Even with the fun of taking a crowbar to the chapter, Luper no longer searches for perfection.

“They say perfect is the enemy of very good,” Luper said. “If you are expecting perfection, you’ll never have something to put out.”

This novel proved to be a prime example for Luper. The want for it to be perfect from the beginning led him to struggle to write the initial drafts, but once he gave himself permission to, “play in the sandbox more”, chapters came quickly.

Luper believes in writer’s struggle rather than a writer’s block.

“Whether I have an idea or not, “ Luper said, “sometimes noodling around on the keyboard leads to some interesting and surprising twists.”

Luper initially started writing in 2000 after he got married. In 2004 he landed a contract to write his first young adult novel “Big Slick”. Luper recalls that after the first book was published in 2007, something clicked and he was ready to move on to the next one.

With his new book, Luper has been able to work with Scholastic — a company with worldwide reach that has shown many kids, Luper included, that it was fun to read.

He has gotten letters from all over the world — India, England, the United Arab Emirates and Australia. He finds the fanmail exciting and rewarding and is holding out hope for something a little extra special.

“Bad Food: Game of Scones” is the first book of a series, with the next installment coming out in March, 2022 . The current novel can be found on Scholastic’s website and at The Book House of Stuyvesant Plaza, where signed copies might be for sale. “I love supporting our local bookstores, “ Luper said. “When I drop in, I usually sign their copies, so if you’re lucky you might find a fun holiday gift for a young reader.”

For Luper, there are certain universalities to being a kid and not much has changed. Every kid has moments of shyness, lack of confidence and finding it easier to be comfortable rather than thinking outside the box. All of what he experienced as a child and what his kids now experience. It’s the same story and the same plot in a different timeline. It’s easy for Luper to pull from his childhood.

“My wife would say I haven’t grown up much, which helps I suppose,” he said.

Looking back at that 10-year-old boy from Springfield, New Jersey is all Eric Luper needs to do when thinking about what to write next.