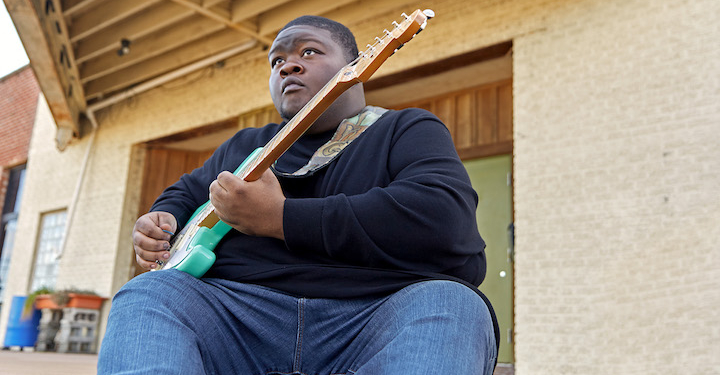 At 22 years old, Christone Ingram is too young to be a blues man. At least, that’s what people say.

“Anytime any young person gets into music that’s older than them, they’re going to hear the older people say that,” Ingram said. “I still kind of hear it today, as well.”

But the blues has been Ingram’s life ever since he can remember. The Grammy-nominated artist has been swimming in the music. His father introduced him to Muddy Waters’ music when he was just 5. Mr. Hoochie Coochie Man had died years before he came into this world, but once he took his first breath the two already had one thing in common — Clarksdale, Mississippi.

The world was introduced to “Kingfish” two years ago, a rocking debut album that shared Ingram’s nickname — a gift bestowed upon him by a teacher when he wasn’t yet a teenager. It wasn’t meant to be a compliment, he said. He had a bit of a swagger to him, perhaps too much for a kid who hadn’t lived enough of a life to embrace the blues. He was at the Delta Blues Museum, being taught how to play the guitar by Bill “Howl-N-Madd” Perry and Richard “Daddy Rich” Crisman at the arts and education program of the museum.

“They gave the kids in the class nicknames. And we thought of them as stagemen,” Ingram said. “They would introduce us with the name. My name was Kingfish, because I reminded him of a character from an old sitcom. It wasn’t too much to be proud of.”

The name originates from Tim Moore’s portrayal of George “Kingfish” Stevens in the radio serial turned television sitcom “Amos ‘n’ Andy.” The series was almost immediately controversial after premiering on the small screen.  The National Association for the Advancement of Colored People protested against how it painted a crude distortion of Black culture.

Ingram’s journey began in the 662, just ten miles from where they say Robert Johnson sold his soul to the devil at the legendary crossroads of Highways 61 and 49. Born to a musical family, he fell in love with music as a small child, initially playing drums and then bass. At a young age, he got his first guitar and quickly soaked up music from Robert Johnson to Lightnin’ Hopkins, from B.B. King to Muddy Waters, from Jimi Hendrix to Prince.

Ingram’s “Kingfish” debuted two years ago on the Billboard Blues Chart in the No. 1 position, and remained on the chart for an astonishing 91 weeks. In addition to receiving a Grammy Award nomination, it was declared the No. 1 Best Blues Album Of 2019 by tastemaker UK music magazine MOJO. NPR Music included Kingfish in its list of Best Debut Albums. Outlets including The New York Times, Rolling Stone, Guitar World, The Washington Post and others shared it with their respective audience. In 2019, Ingram’s first single, “Fresh Out,” featuring Buddy Guy, was the most played song on Sirius/XM’s highly regarded Bluesville channel. Kingfish was also No. 1 on the Living Blues Radio Chart’s Top 50 Albums Of The Year.

Within those two years, he’s headlined two national tours and performed with friends including Vampire Weekend, Jason Isbell and Buddy Guy, with whom he appeared on Austin City Limits. He was interviewed by Sir Elton John on his Apple Music podcast, Rocket Hour, and recently released a duet with Bootsy Collins.

“A lot of people think it’s just about the music, but there are other things that make up the culture,” Ingram said. “In ‘662’, like I said, there’s literally a church on every corner. They got people in the yard smacking and drinking and cussing, and talking about going to work. I feel like I make up the culture, the African-American Blues culture. And not only does it go that deep. It goes as deep as protest music as well. The song, ‘Another Life Goes By,’ shouts that out as well.”

Ingram describes “662” as his own personal journey, a story that sits upon the legacy of his influential blues elders. The songs—reflecting his life in and away from his home in the Delta—speak to universal truths, as well as to similar experiences shared by his large and growing multi-generational, multi-cultural fan base. From the blistering, hometown title track, “662,” to the irresistible “She Calls Me Kingfish” to the slow, soulful and poignant “Another Life Goes By” to the funky truth-telling “Too Young To Remember,” “662” overflows with hard-hitting songs, jaw-dropping guitar work and deep, soul-possessed vocals.

“I didn’t really have a motive,” Ingram said. “Then, once I got deeper into the industry, I saw that I could really do this. I can show my peers that there’s nothing wrong with being young and liking blues. Once we sit them down, we can teach them about real-world things. So far, for me, it’s actually worked.”

With his eye-popping guitar playing and his reach-out-and-grab-you-by-the-collar vocals, Ingram performs every song with unmatched passion and precision. While his new songs tell personal stories, they also tell of shared human experiences. With “662,” he creates contemporary blues music that speaks to his generation and beyond, delivering the full healing power of the blues. And he can’t wait to bring that power on stage.

“From the couple of experiences I have had with some of the old-time legends like Eddy Clearwater, rest in peace, and Mr. Buddy Guy, having their respect — I think so. I think so. … I feel the OGs respect me for what I do, and understand that I have the love and appreciation for the music as a young guitar player,” Ingram said. “Sometimes, being a young blues player the stigma is there that you don’t care about the past. I think a lot of the OGs see that I really do care about the past, because I come from it. It’s my culture. That’s for sure.”