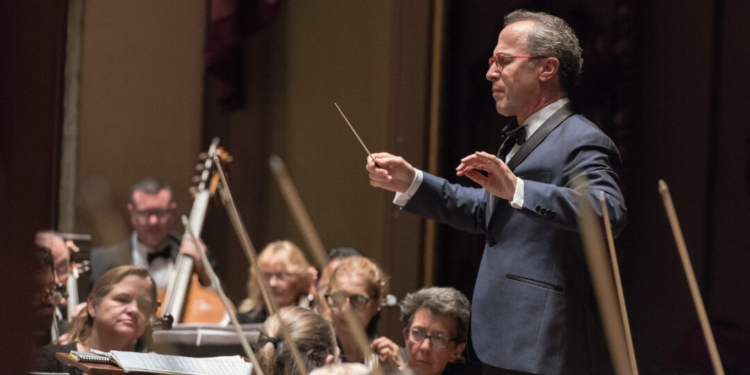 ALBANY — As David Alan Miller’s 30th season as Albany Symphony’s Music Director approaches, the conversation leans towards habit, a word he avoids because of its perceived state of complacency.

Talk of habit is brushed aside with confessions of humming along to a James Taylor earworm as he walks into his neighborhood supermarket. He shares that he once developed a routine similar to pro athletes, choosing a particular meal before performances. In his case, Japanese food, because he found it calming. But admitting to a habit implies stagnation, and that’s not how one would define his career.

“In a way, what I’m most concerned about is that we not fall into habits,” Miller said. “Because when you’ve been somewhere for 30 years, the greatest danger is that, God forbid, it becomes stale… I, and we, are forever fighting against having it be what you’d expect. We want it to be the unexpected.”

The Los Angeles native first took the podium in 1992 and has lived in the Capital District for just as long, establishing roots to which Miller and his wife raised three kids — two of whom have pursued a life of music as well. His run with the Albany Symphony represents nearly one-third of its 91-year history. And within that relative short time, he has cultivated its reputation as one of its most innovative orchestras. Along the way, the small city troupe has wrangled two Grammy Awards away from orchestras from Boston and Philadelphia.

Miller has been the nation’s leading champion of American symphonic music, continuously marrying classic greats from Brahms, Bach and Beethoven with a world-premiere or recent composition from today’s brightest young talents. In each show, Maestro turns to the audience to share anecdotes behind each work. The magic he often wields is how he finds the common denominator that bridges over the centuries.

“With his creative, thoughtful programming, his tremendous talent as a conductor, and his tireless advocacy for education, inclusion and the Capital Region community, David Alan Miller truly embodies the Albany Symphony’s mission,” says Symphony Board Chair Jerel Golub. “I encourage everyone to join us in our concert halls this season to celebrate David’s momentous milestone.”

The Albany Symphony returns to the Palace Theatre stage on Saturday, Oct. 9, at 7:30 p.m. for the start of Miller’s 30th Anniversary Season. The program features Ludwig van Beethoven’s beloved Symphony No. 3, “Eroica,” as well as Jean Sibelius’ Lemminkäinen Suite, and Coincident Dances, an aural melting pot of city sounds by Jessie Montgomery, a composer who the New York Times said is “changing the canon for American orchestras.”

Opening Night’s program includes Beethoven’s Eroica, the symphony that launched, appropriately, the “heroic” middle period of the composer’s career and pushed the boundaries of the symphony form, Sibelius’ Lemminkäinen Suite, music that brings Finnish folktales of the eponymous hero from the Kalevala to life in vivid vignettes, and Coincident Dances by Jessie Montgomery, a frequent Albany Symphony collaborator who draws from her life experiences in thoughtful and captivating ways.

Montgomery’s “Coincident Dances” may just be that bridge that spans from today’s world and Beethoven’s. The dramatic expression of the German composer is no stranger to dance, whether in ballet or a New York City disco. As Montgomery describes her work, she drew inspiration from dances across the globe.

“Coincident Dances is inspired by the sounds found in New York’s various cultures, capturing the frenetic energy and multicultural aural palette one hears even in a short walk through a New York City neighborhood,” Montgomery said. “The work is a fusion of several different sound-worlds: English consort, samba, mbira dance music from Ghana, swing, and techno.”

Saturday night will welcome patrons back to the Albany Palace for the first time since Spring 2020, with extra precautions in place for everyone’s health and safety in response to the ongoing COVID-19 pandemic. The concert, along with all Albany Symphony subscription concerts this season, is also being streamed live online to increase access for patrons who cannot attend in person, or live too far away to come to the concert hall.

Tickets (including livestream access) start at $20 and are available at albanysymphony.com.

“We are so thrilled to gather again, and to be able to make beautiful music with and for our patrons and friends here in the Capital Region and beyond,” Miller said. “This season is a special one for us. The musicians and I can’t wait to share this program celebrating heroism, community, and the healing power of great music with you.”