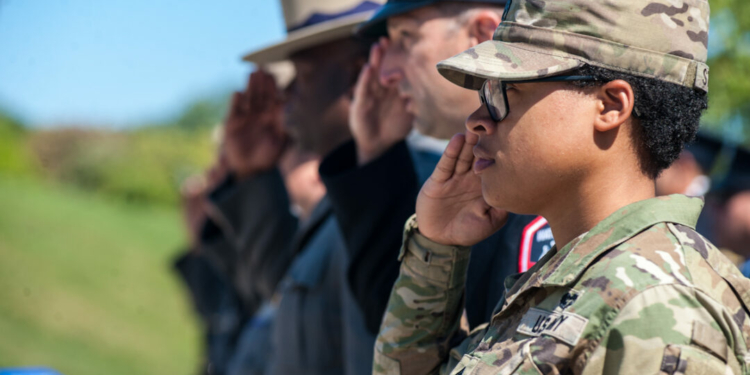 ALBANY — The Albany Jazz Festival served as the setting for a lot more than just music on what was the 20th anniversary of the terrorist attacks on Sept. 11, 2001.

On Saturday, Mayor Kathy Sheehan was joined by other local dignitaries, veterans of the 369th Infantry Regiment, to commemorate the anniversary of the 9/11 attacks, honoring first responders and military personnel for their service.

The day was also set aside for the presentation of the 5th Annual Henry Johnson Award for Distinguished Community Service to Dr. Brenda J. Robinson, a long-time Albany resident, nurse and community activist. Dr. Robinson has worked tirelessly and selflessly to protect health care workers and the general public, especially those in underserved communities, during the COVID-19 pandemic. The award was given at the Albany Jazz Festival because the 369th Regiment Band that played when Sgt. Johnson served during WWI is credited with bringing jazz to the European continent.

The Henry Johnson Award was created five years ago by the City of Albany and is given annually to a resident who has “demonstrably given of their time and talent to build a better Albany.” Selflessness and courage, traits exemplified by Sgt. Henry Johnson, the City’s acclaimed World War I hero (see bio below), are sought in nominees. Sgt. Johnson’s heroic actions in France in May 1918 posthumously earned him the Medal of Honor, the highest military tribute given to an American soldier, bestowed by former President Barack Obama on June 2015 a White House ceremony.

“Eliminating health disparities and social injustices cannot be done without strong advocacy, accountability, transparency, partnerships—and putting in the necessary work,” Dr. Robinson said. “I am deeply honored by this award, and I share the honor with all the frontline workers who have stood shoulder to shoulder in the most difficult of circumstances, to make us all, especially the underserved, safe during this once-in-a-lifetime pandemic.”

Robinson was awarded a plaque, a proclamation and a Sgt. Henry Johnson Commemorative Medal produced by Ferris Coin.

“Dr. Brenda Robinson has long served others, steadfastly fighting to protect human rights and the health of all,” said Mayor Kathy Sheehan. “When the pandemic struck, she stepped up to protect her fellow healthcare workers, and also risked her own health to serve and vaccinate so many of the vulnerable, protecting them from the ravages of COVID-19. As did Sgt. Henry Johnson, she exemplifies the virtues of courage and selflessness. We are fortunate to have such a deserving Albany leader who has again and again met the pressing societal trials of our times.”

“The Henry Johnson Award was established to honor those who go above and beyond to fight for justice and equality, honoring those who take pride ensuring no one is left behind,” said Ronald Wilson, President of the Albany branch of the 369th Veterans Association, who presented the Award. “Dr. Robinson is the perfect example of what this award represents. Her commitment and dedication to her work – and her ongoing efforts to leave no one behind – is an absolute inspiration to us all.”

On June 5, 1917, Albany resident Henry Johnson enlisted in the U.S. Army. Because of racial segregation and the refusal of the U.S. Army to allow African American soldiers to participate in combat, members of 369th Infantry Regiment, known as the Harlem Hellfighters, fought under the French. In May 1918 Johnson heroically and single-handedly fought off a German raid in hand-to-hand combat, saving the life of a fellow soldier. For his bravery, Johnson was awarded the Croix de Guerre, the first American to receive France’s highest award for valor.

Johnson returned to Albany in 1919 and was celebrated as a war hero. But despite having sustained 21 wounds, he received no honors from his home country. After speaking out against racism in the military and the country, Johnson was forbidden to speak publicly at military gatherings. He died, destitute, in 1929, in his mid-30s. He is buried in Arlington National Cemetery.

Members of the 369th Infantry Regiment were strong advocates behind Johnson’s ultimate recognition by the United States government for his service to his country. He was posthumously awarded the Purple Heart in 1996 and the Distinguished Service Cross in 2002. In 2015, President Barak Obama awarded Johnson the National Medal of Honor—the nation’s highest military honor.

The Henry Johnson Award for Distinguished Community Service is given in the spirit of Albany resident Henry Johnson, in honor and recognition of his selfless service and his drive to go above and beyond the call of duty.

Robinson was born and raised in Albany’s West Hill neighborhood, is a proud graduate of Albany High School, and currently resides in the Arbor Hill neighborhood. For many years, she has dedicated herself to the service of others as a healthcare provider and as an advocate for health equity. In his nomination of Robinson for the Henry Johnson Award, NY State Assemblymember John McDonald III, who represents the neighborhood where Dr. Robinson resides, called her “a positive force and a change-maker.”

During the pandemic, Robinson has been a knowledgeable and trusted messenger in the Capital District in the fight against COVID-19. Through the City of Albany, the Albany County Sheriff’s Office and other organizations, she has helped to distribute tens of thousands of critical PPE to under-served communities as well as to fellow healthcare providers. She organized and participated in outreach and education efforts, including Albany Medical Center’s “Don’t Hesitate, Vaccinate” Campaign, ensuring that equity was a guiding principle of vaccine distribution. She created the BNC “Vax Team,” which served as the only African American organization in the Tri-city area conducting COVID vaccinations. She has led numerous webinars, workshops, social media events and presentations, providing “real-talk” health education, including about COVID-19. She organized the first annual BNC Breast Cancer Awareness Walk in Arbor Hill. She is the lead applicant for a recently approved high school that focuses on healthcare professions and creates a pipeline to college.

She also risked her own health when she knocked on doors during the height of the pandemic to register people to get vaccinated, conduct wellness checks on the home-bound, and manage chronic health conditions.

This past year, Robinson also served as a community leader on the City of Albany’s Community Safety & Restorative Justice Working Group, building bridges between Albany police and communities and identifying key reforms as Chair of the Community Safety & Restorative Justice Working Group. She is also President of the Arbor Hill Neighborhood Association, a member of Albany Public Library’s Board of Trustees, and the Chairperson of the City of Albany Commission on Human Rights.