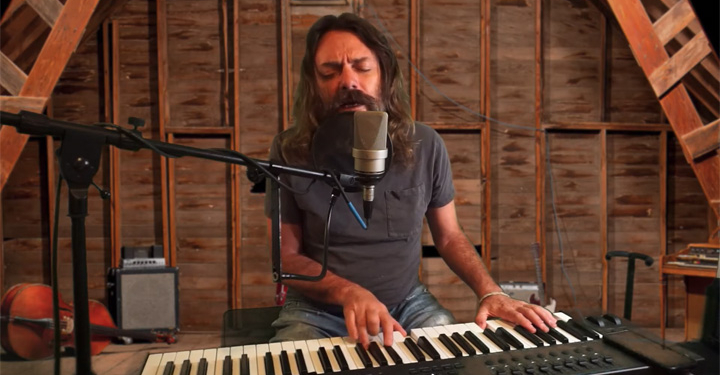 NEW ORLEANS, La. — Hurricane Ida was forecasted to be a monster of a storm, projected to glance past the city devastated by another cyclone 16 years to the day, but hours before it would slam the coast, Lo Faber shared he would ride it out with a song.

The upstate New York native, an honorary Ominous Seapod for all the times he’s played in with Albany’s favorite jam band, has called The Big Easy home for nearly a decade. In true form, he posted a cover of Randy Newman’s “I Think It’s Going to Rain Today,” with a simple note stating, “Staying in Nola.”

Since earning his doctorate and taking a professor position at ​​Loyola University New Orleans in 2012, Faber said he’s observed a social dynamic within New Orleans. It’s defined in casual conversation among strangers learning about one another. What one did during Hurricane Katrina was an easy way to break the ice for those who were there. The city timeline is broken between what happened before the storm, and what is now after the storm. Faber is distinguished as a resident who moved in “after the storm.”

Tropical storms that spin over the warm waters of the Gulf of Mexico always draw concern. The latent heat above gulf water, registering as warm as 85 degrees, is the kind of fuel that transforms storms into devastating weather events overnight. That’s the kind of pace the National Weather Service was observing as Ida approached the coast.

“Recent reports from both NOAA and Air Force Reserve Hurricane Hunter aircraft indicate that Ida has continued to strengthen since [9 a.m.] and the maximum winds are estimated to be [150 mph],” the weather agency reported at 10 a.m. that Sunday, adding superlatives such as “extremely life-threatening” and “catastrophic” to describe the storm. It’s not meant to scare people as much as it is to lend proper perspective; to influence residents to up and leave when asked to evacuate. A 10-foot storm surge places the water’s surface level at the same height as an NBA regulation basketball hoop.

“Conditions in New Orleans Noon Sunday: just the edge of the storm,” wrote Faber. “High winds but nowhere near what’s coming. Steady rain. Scattered outages but we still have power Uptown. The real storm hits in 4 to 8 hours.”

On Sunday, Aug. 29, Hurricane Ida hit the Louisiana coast as a Category 4 storm, with sustained winds of 155 mph and storm surges above 9 feet. The timing of its landfall wasn’t lost on many meteorologists concerned they were going to see another Katrina hit New Orleans. They weren’t wrong.

The storm knocked out all eight transmission lines feeding power into the city as peak winds of 150 mph hit the area. The winds toppled a 400-foot tower that had survived Katrina. An estimated 2,000 miles of transmission lines were put out of service. Local news coverage reported that 216 substations were subsequently knocked out. Experts are estimating it will take three to six weeks to restore power.

“7 pm update. We are in the midst of it now for real,” Faber wrote. “Very high winds and they are more or less continuous, with strong gusts that shake the whole house. We can see we’ve lost a whole lot of roof shingles. Horizontal sheets of whipping rain. I think this part will last the next couple hours. We are totally fine though, so far.

“I pray for the folks out in Houma, Thibodaux, Laplace etc. Going to light the drinking lamp I think (the only lamp we can light) Love to all ❤️ and thanks for the well wishes!”

Mark Sudduth, an amateur hurricane tracker, has been posting storm updates on his Twitter feed. Prior to Ida’s landfall, he had installed a camera at Frenier Landing in the coastal town of Laplace, Louisiana. What he shared looked like a scene out in the middle of the ocean. Only the faint sight of a naked, gnarly tree can be spotted between the waves beating up against the camera lens. Sudduth noted that the camera was installed 10 feet above the ground. The ocean reclaimed the land.

Entergy, the power company that supplies energy to Louisiana and Mississippi, described the hurricane as “historic” as it warned customers of power outages “lasting for weeks.”

“Ida’s historic intensity has brought a tremendous amount of damage across Louisiana and Mississippi,” Entergy shared in a statement over its website. The company added that it expects to employ the services of 20,000 people through the industry’s mutual assistance program. “Because of the extent of damage and rebuilding required, we expect recovery to be difficult and challenging, and customers in the hardest-hit areas should expect extended power outages lasting for weeks.”

President Joe Biden declared Louisiana a Major Disaster due to widespread damage across Louisiana. Before the end of the day, Louisiana Gov. John Bel Edwards said more than 800,000 were without power across the state.

““This will be critical to our response to the recovery from Hurricane Ida which has proven to be as dangerous as we anticipated,” Edwards said. “FEMA has been with us since before the storm to help coordinate our state and federal efforts, which has been incredibly helpful. I know that it will take some time to address all of the challenges of this storm, but I am confident in the resilience of our people and the commitment of all of our partners to pull through this, which we will do together.”

Faber emerged the following morning with another online update shortly before noon on Monday.

“We are alright. No power, obviously,” he wrote. “Took a walk round the neighborhood, Lots of wind damage, trees down, branches blown around, roof shingles blown off by the thousands, fences blown over. A few trees pulled out by the roots – that’s some high wind! But no flooding, at least in this part of Uptown Nola.

“Have a feeling it’s gonna take a long time to restore power based on the number of downed trees and utility poles. Thanks for all the well wishes.”

What to expect when remodeling your kitchen – A Homeowners Guide