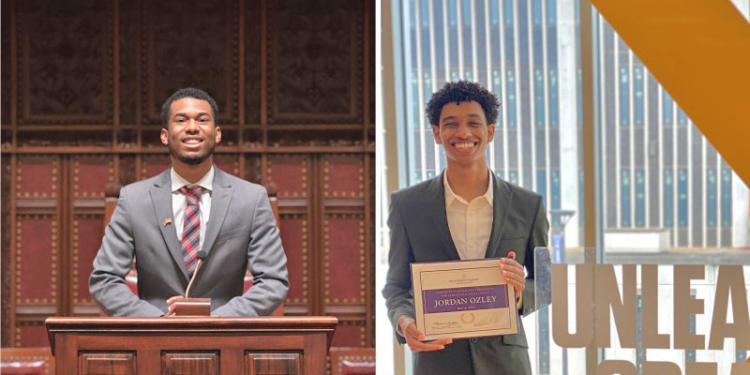 ALBANY — For Jordan Ozley and Nicholas Chin, understanding the value of education was a lesson both learned from their parents at an early age.

For Ozley, an economics major from Huntington Station, who will graduate in 2022, it’s something he has especially taken to heart as a way to honor his father.

For Chin, who is from Staten Island and is majoring in political science and history, it was a value passed down to him from his parents, who moved to the United States with virtually nothing but with the goal of providing opportunity for their children.

“My mother and father both immigrated to this country from Trinidad and Tobago with little money or material possessions,” said Chin. “My mom raised me with the understanding that education was the key to my success, and spared no expense to make sure her son was the best equipped to supersede expectations.”

In recognition of all they have accomplished as University at Albany students, Ozley and Chin have been awarded the Juneteenth Scholarship for the 2021-22 academic year.

“I am honored to have been considered for this award and I am privileged to accept it,” said Ozley. “For my entire life I have valued the importance of diversity. True diversity, however, is challenging. People will often refute and invalidate experiences that run counter to their own. However, it is my belief that through open conversations in good faith, as we gain a better understanding of each other’s backgrounds, stories, experiences and cultures, we gain a better understanding of each other as a whole.”

Ozley notes that uplifting the voices, stories, experiences and cultures of others is worth the challenge.

“My family has deep roots in the United States and the history of this nation has been ingrained in my understanding of myself and sense of purpose to my community,” said Ozley. “Juneteenth is certainly no exception as it signifies and celebrates the true independence of my people in the United States, people who look like me. My grandparents as well, consistently instilled a sense of pride and confidence in me. Given that, I am proud to be a Black student at the University at Albany. I am grateful to be recognized, and to see my fellow students of color recognized as well.”

“Receiving this scholarship meant a great deal to me as Juneteenth is celebrated to remember the perseverance and triumph exhibited by those slaves in Texas, and while I cannot even begin to imagine the horrors of slavery, the story of persistence reminds me of my life story,” said Chin.

As he transitions from student to graduate, Chin has come to understand how political institutions play a role in shaping policy and improving peoples’ lives. In high school he landed his first internship in New York government with the office of Assemblyman Michael Cusick, who told him of the opportunities to continue studying public service and politics through an education at University at Albany.

Since arriving on campus, Chin has taken on roles of resident assistant, tour guide, orientation leader and Purple and Gold Ambassador. But the role for which he is most proud is his service as part of University at Albany’s Student Association, as a senator and then as Senate Chairman. He followed this up with an internship in the New York State Senate.

“This internship has been an amazing experience, and has got me thinking about applying to the NYS Senate Fellowship after I am done with graduate school with the hopes of gaining full employment in the Senate,” said Chin.

But whatever role comes next — as a staff person or elected official himself — it will certainly involve continuing his commitment to public service.

Gifts to The Juneteenth Scholarship can be made at www.albany.edu/giving/juneteenth.

This article was originally published by the University at Albany.

OD deaths on track to break another record in Albany County