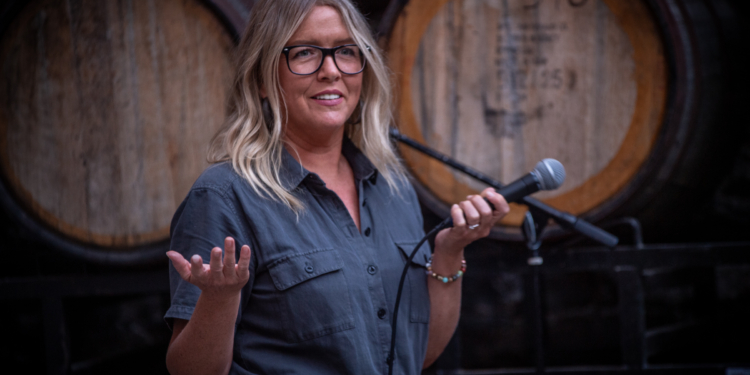 ALBANY — Comedian Erin Harkes mourned over the loss of jokes that came and went without an audience to share them with for 15 months. She made up for it though by unleashing a barrage of F-bombs in front of her first crowd.

Harkes dropped her comedy album “Zoloft + Probation” with a release party at Albany Distilling Company on Thursday, June 18. It was a party three months in the making as the album has been on the market for that long. But, as she said, it deserved such a party.

The opportunity for a party wasn’t quite available until just now, for reasons already explained at nauseum since March 2020. Thursday’s night show was a coming-out celebration of sorts for just about everyone. played out on Albany Distilling Company’s redressed patio featuring a new deck, a VIP loft and a friendly staircase with direct access to the barroom. Just another example of what restaurants did during the shutdown.

Harkes invited a cadre of comedians that included Jim Felter, Dre Cerbin, Shawn Gillie, Quentin Davis and Jennifer McMullen — all of whom friends who have performed together in the past.

As expected, the night’s theme captured what everyone experienced over the past year. Highlights included Gillie’s set in which he joked how he nearly lost his house due to drinking too much during quarantine. (There’s a punchline there, and I’m not going to reveal it.) Harkes shared the many ways in which the engagement with her fiancé was challenged by the two spending additional time together. Cerbin singled out the parents in the room and forced me to admit that awkward moment many parents felt after walking out of the shower and in front of a Zoom chat full of school kids. “The third time’s on you, pal,” she said.

2020 was ripe for joke writing. Washington supplied the punchlines; as did social media, home learning and going braless, all to which we could relate. Whether the crowd was ready to see themselves through the eyes of a comedian didn’t matter towards the end. It was a much needed night out for people relegated to house cats for 15 months, and we all got a chance to laugh at ourselves together.