Proctors Collaborative ushers in a new playhouse in Warehouse District 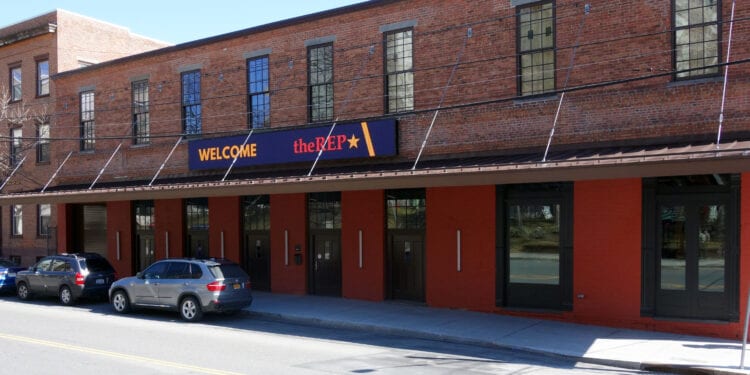 ALBANY — There was talk of fairy tales, dreams come true and happily-ever-afters as The Capital Repertory Theatre announced the completion of its newly renovated home at 251 North Pearl St. on Wednesday, March 24.

“I’ve used the metaphor ‘Always a bridesmaid but never a bride’ and I feel like a bride almost today, maybe a bride, but I can’t have my honeymoon night,” said Maggie Mancinelli-Cahill, artistic director of Capital Repertory Theatre. The reason for no honeymoon night is that while construction has been completed on the building there’s no schedule for opening the doors to the public yet due to the pandemic.

Proctors Collaborative CEO Philip Morris hosted the press conference, beaming with pride at announcing the new $14.5 million playhouse — a half mile up the street from its former location in Clinton Square.

“It’s not very often in the theater world that a [League of Resident Theatres] theater, a professional producing theater can announce a new building,” he said, “especially one this spectacular. So, for the Capital Region, for which, TheREP is the only theater of its kind for 11 or 12 counties, we are ecstatic to say this is complete.”

The 28,000 square-foot theatre was the home of National Biscuit Company at the turn of the 20th century. The Capital Repertory purchased the building in the city’s burgeoning warehouse district in 2017, and proceeded with an ambitious renovation project. The theatre staged its final production at its 111 No. Pearl St. location last March as the state instituted virus mitigation protocols. It had called the former grocery storefront home since it was founded in 1981.

Once theatres are permitted to reopen, the new footprint will feature expanded amenities that includes a wider stage, a 302-seat auditorium with unobstructed sightlines and an additional 70-person performing arts studio.

Mayor Kathy Sheehan, who recently moved into the neighborhood, jokingly turned questions over parking into a sales pitch to coax more people to move in.

“You can buy a house in Arbor Hill and walk here,” she said. Notwithstanding, there is an adjacent 65-space parking lot for theatre patrons. She concluded by calling the playhouse a “sign of hope.”

“It is a sign of hope for our future, of our ability to be resilient and to have something to look forward to that’s new and amazing.”