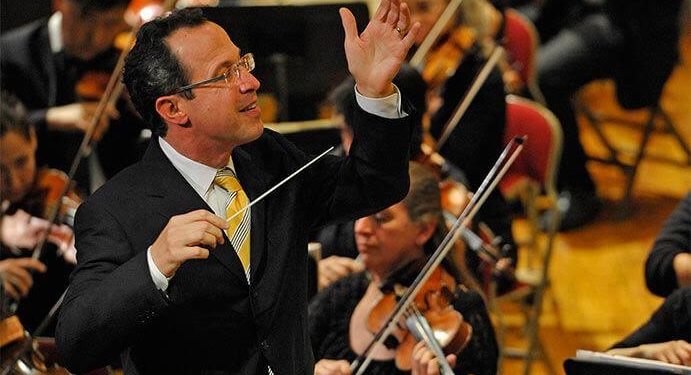 ALBANY — When David Alan Miller heard he won his second Grammy, he wasn’t even watching the show. Because COVID-19 restrictions prevented him from attending the ceremony in California, he was home with his family. He was leaving Fred the Butcher’s new location in Slingerlands when his daughter told him the news.

Albany Symphony Orchestra took home the coveted award in the category of “Best Classical Instrumental Solo” for its performance of Chris Theofanidis’ Concerto for Viola and Chamber Orchestra. Richard O’Neill was featured as the soloist and Miller was recognized as the conductor.

“It’s such an honor to be recognized against some of these massive orchestras who have resources far beyond ours,” Miller said. “I had steeled myself for a loss because of the talent we were up against.”

ASO and O’Neill beat out the Boston Symphony Orchestra, The Philadelphia Orchestra, German pianist Igor Levit and Germany’s Symphonieorchester Des Bayerischen Rundfunks. Boston and Philadelphia’s orchestras are widely revered as two of the most extensive, talented orchestras in the country.

“I really didn’t think we were going to win because it was such a strong category,” Miller said. This was Albany Symphony’s fifth nomination in seven years. The orchestra won its first Grammy in 2013. “We’re such a little orchestra and some of these places have way more than we do.”

Miller said at the time of this year’s nomination that the feat was unique because of the viola’s solo. Violas are in the middle of the string section, so the instrument tends to get lost easily; if one studies nominations for solos in the category, many feature violin or piano.

O’Neill is only the second person to receive the award for a viola performance since the creation of the category. The Korean-American violist was nominated twice before.

“This is a great day for the viola,” O’Neill proclaimed, as he accepted the award virtually. While thanking the recording academy for “this honor of a lifetime,” he continued to show his gratitude towards Theofanidis, Miller, and “the wonderful Albany Symphony.”

“We are so incredibly proud of Richard for his incredible work,” Miller said of O’Neill at the time of the nomination in November.

Since the orchestra’s first win, Miller said the recognition has been steady. He credits this to the group’s approach to music; it tries to record either contemporary music or music that hasn’t been recorded before.

“Nobody wants to hear a Tchaikovsky piece recorded for the 20th time,” Miller said. “We want to contribute to the industry in a different way. Chris [Theofanidis] is a composer we’ve worked with annually for about 10 years and he has a way of making this group ‘sing’ in a way that’s so unique to him.”

Theofanidis, 53, is a graduate of Yale, the Eastman School of Music and the University of Houston. His work has been commissioned by some of the biggest forces in classical music, including the London Symphony, The Philadelphia Orchestra and others across the country. He served as the Pittsburgh Symphony’s Composer of the Year from 2006 to 2007; during that time, he wrote a concerto for esteemed violinist Sarah Chang. Theofanidis is the recipient of a Guggenheim Fellowship, a Fulbright Fellowship to France, six ASCAP Gould Prizes and a 2007 Grammy nomination for best composition of “The Here and Now,” amongst other awards.

“This is a great endorsement for the work we’ve been doing, especially as we are preparing to announce next season’s program, which will begin in October,” Miller said. “I hope it gives us some rocket fuel as great things keep coming down the pike.”

Albany Symphony will offer both live and virtual shows next season; Miller said the live shows are contingent on COVID-19 restrictions and how far along the vaccination progress is in the Capital District.