Terry McMaster showcasing art at Merriman and Pfister through April 10 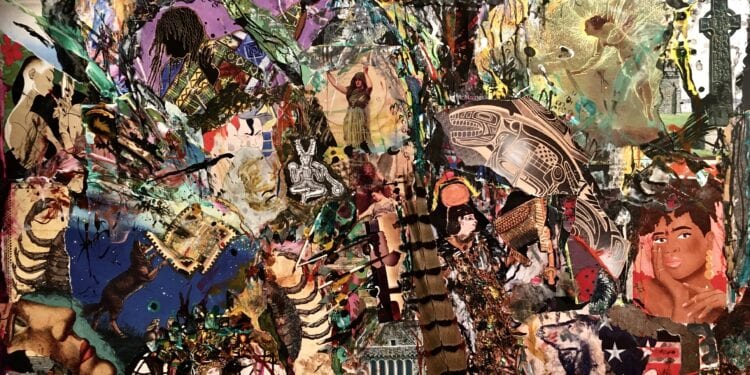 DELMAR — Terry McMaster wants to see something different in the art he consumes and creates. The mixed-media extraordinaire doesn’t want to see the same washed-and-dried ideas of mainstream designs. He believes there should be something more.

McMaster is an artist in his own right. He applies his taste for art in his own works. What does he want to see? Somehow, that thought translates itself onto his canvas. He accomplishes this by mixing mediums like photography, paint and collage to birth an explosive burst of colors and textures. A combination of beautiful and mysterious, with complementing 3D textures and clashing colors, McMaster’s art forces the connoisseur to really stop and put some thought into its meaning.

McMaster will showcase his works at a pop-up show at Merriman and Pfister Artisan Marketplace, from March 13 to April 10. There will be a reception on opening day, where McMaster will speak about the pieces shown.

Kathy Agneta, the owner of Merriman and Pfister, said the collaboration with McMaster fits the bill of her shop, a place where artisans can showcase unique products to an audience that quickly gobbles it up.

“Terry’s creative spirit is so unusually great,” Agneta said. “Being that Terry is new to Delmar, we both felt this was the perfect medium to introduce his work to our community.”

Agneta said the beauty of Merriman and Pfister’s ability to pedal innovative products to the community creates a “cycle of goodness,” as each customer reveres their purchases, which ends up pleasing the artist, encouraging the artist to keep producing.

“What my art does is unlock the spiritual creativity inside me,” McMaster said. “It manifests different emotions and thoughts onto a canvas.”

McMaster had an unconventional start to art. Once an anthropology student in Syracuse, he found himself disenchanted with the field and more intrigued by his photography class. He found the more he studied art history, the more the idea of creating called to him. However, the comfort of creating was fleeting; it took him a long time to get to a place where creating art felt authentic and he was conveying the message he wanted. During this time, he was consuming any art class he could, including ceramics and design.

His turning point came in 2001, when he and a friend were traveling to Albany on a biweekly basis for a class at Glass Lake Studios. His teacher, knowing the frustrations that arise when being forced to create, asked each student to tape a piece of paper to the wall and just paint — no thinking, no planning, no pondering, just put the paintbrush on the canvas.

“I painted for about 45 minutes and took a walk across the studio,” McMaster said. “It struck me how amazed I was with the work I just produced. My professor walked over and told me I was a wonderful visual artist, which shocked me since what came out of me was not what I intended.”

From that point, McMaster painted two to three times a week. As he continued the progression, he was working on his photography and found himself frustrated that his photos weren’t 100 percent what he wanted. A thought hit him: “what if I took this photo and painted on it?”

“I arrived at this point where I said if I didn’t like something, I’d paint it so I did,” McMaster said. “That was three years ago and from there, I’ve been incorporating my photography with my painting.”

McMaster’s photography is thought-provoking. He has a fascination with gravestones, particularly ones nestled on his ancestors’ graves in Palmer, Massachusetts. Gravestones from that time — his ancestors were in the first 40 to 50 Scot-Irish families to settle in Palmer in the 1720s — boast scripture and different faces, details that offer much more intricacy than today’s generic stones.

McMaster’s natural evolution found him incorporating the faces and scripture into his photography and painting, which created a collage that facilitated the art he’s known for today. He’s taken it up a notch by adding small figures to his collages, creating a 3D experience for admirers.

As he’s progressed, McMaster said much of his work is influenced by the teaching of Karl Jung, a psychology pioneer: Jung’s premise was a foil to Sigmund Freud, in that Jung believed the unconscious was a storehouse of spiritual transcendence. While Freud believed the subconscious should be repressed for a decent life, Jung encouraged people to tap into their subconscious for a clearer understanding of who they are.

“I think that’s the point of art in general,” McMaster said. “I’ve studied Jung since college and I’ve found my art becoming my vehicle to explore the subconscious and reach conclusions about my own desires.”

SPOTTED: Shaker gets by Colonie in end of year scrimmage