A day at the beach with Rochmon 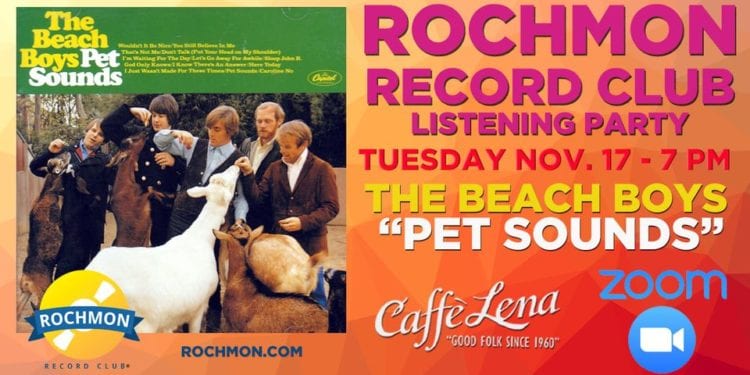 SARATOGA SPRINGS — The Rochmon Record Club will dive into one of the Beach Boys’ classics next Tuesday.

Chuck Vosganian, also known as Rochmon, invites all to converge via Zoom to listen to and learn about Beach Boys “Pet Sounds” on Tuesday, Nov. 17, at 7 p.m.

A Rochmon Record Club Listening Party is meant to inform and deepen our understanding of the history of the individual performers, songs and the stories that went into the making of this classic album. By listening together, we hear the music again for the first time.

In December 1965 the Beach Boys label mates, The Beatles, released “Rubber Soul.” Brian Wilson, the Beach Boy’s chief songwriter and resident savant, left the road and sequestered himself in his home. It was then, with advertising copywriter turned lyricist Tony Asher, Wilson wrote the bulk of the album we know as “Pet Sounds.”

Vosganian said “Pet Sounds” is an absolute work of genius that features the Beach Boys classics “Wouldn’t It Be Nice,” “Sloop John B,” “God Only Knows” and “Caroline No” to name a few.

The Rochmon Record Club Listening Party for The Beach Boy’s “Pet Sounds” begins at 7 p.m. with a live audio and video presentation.

The Rochmon Record Club will be streaming live on Zoom. Go to caffelena.org to register for tickets! Attendees will be sent information to access the show after you register.