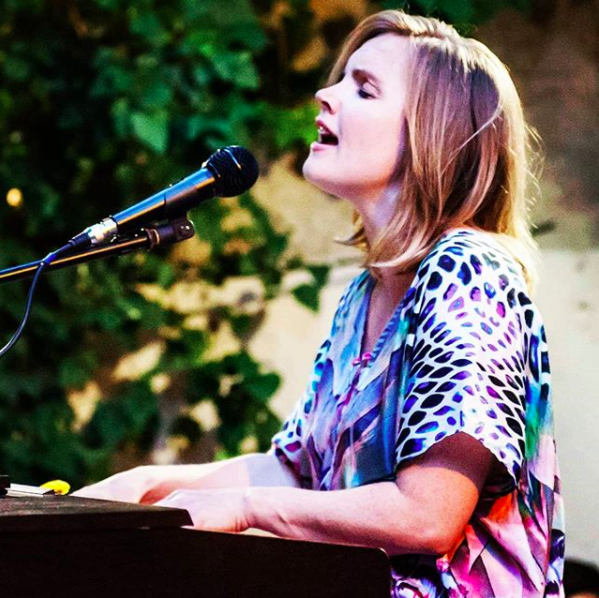 Cassandra Kubinski recalls being caught up in a conversation with her now husband, Bogdan Ologan, while lying under a clear night sky within the quiet of upstate New York. It’s one of those memories one holds on to that draws a string from friendship to matrimony. An intangible bond wrapped around an undeniable feeling defined by an existential conversation of how “we’re all stardust.”

That’s a little of the backstory to the singer-songwriter’s latest release, “Stardust.” Kubinski released the single in July, followed by a dance remix featuring DJ Taz Rashid she dropped online last week.

“It came out of a conversation I had with my husband,” she said. “He looked up at the stars and said, wow. Isn’t that crazy that that’s all we are? Then, we had this very scientific discussion about exploded carbon and humanity.”

Some unexpected chemistry developed between Kubinski and her husband about eight years ago. They had long been friends before. At about that time, he had moved to Queensbury and she’d visit with promises he’d show her “this gem of a town,” she said. She found the Spa City to have a cultured, international flavor in a rural haven of towns and farmland.

“It was love at first sight,” Kubinski said. “Not with him. With Saratoga.”

Today, Kubinski calls Saratoga Springs her home. The summertime playground of socialites and the affluent who have both cares and dollars to spare. She and her husband have lived here part time. For three years, they’d commute back and forth between the New York City area, where they both work, and upstate. But, since virus-related shutdowns, the couple has lived in the 518 for “99 percent” of the time while working from home.

“It’s been transformative,” said Kubinski, “because I think as with many people’s experience, having this time to regroup and refocus and see how are things going to shake out as far as where you need to be to do the work that you do. It’s worked out well for both of us to be here. It might be something that becomes more ongoing.”

As observant of the world, and introspective as she may be, Kubinski sees herself bouncing between the extremes of being an extrovert and an introvert. In a surreal summer where the Saratoga Performing Arts Center is quiet and no one is at the track, she is working on something each day. She has a love for organic dark chocolate, and a propensity to walk in solitude while lost inside the tune to her next song — even if it’s still pushing to get itself out.

“On any one day, I might be holed-up in my little yoga room; journaling or meditating, listening or trying to stay away from the digital signals and the energy of other people,” Kubinski said. It’s a habit she had since living in a shoebox of a New York City apartment as a fledgling 20-year-old. “And on other days, I absolutely need and crave that energy and feedback. Not just because me ego wants it, but because it helps me feel not alone.” She captures such moments in her song “There’s Where You’ll Find Me.” She said while she lived in Brooklyn Heights, she’d sit on a bench overlooking the East River and daydream as she watched the rest of the world buzzing over Manhattan.

Kubinski is a musician. She bares the curse of all creative souls: in the possession of a whimsical spirit floating upon the latest flights of fancy that draws her attention. Read the biography on her website. Those are her words. She grabs your hand into a dance of prose as she describes a New England childhood set to the music of Toni Mitchell, Carole King and Broadway musicals. A backwards glance from today would mistake a straight path between points A and B — a musical career set by design — but, then you’d fail to stop and observe. There were times she wanted to be a marine biologist. There is, too, an acting career in which she appeared in modest roles on the television series “Spin City” with Michael J. Fox, and the major motion picture film “Finding Forrester” with Sean Connery.

Kubinski’s attention has also been drawn to works of the heart. A few years ago, her “Not So Different” provided an anthem for the autism community. Her lyrical song was ever present as the soundtrack for personal videos made by families who shared their stories about living their lives touched by autism. She’s also been an outspoken advocate for Music for Autism, Susan Komen’s Race for the Cure, and Swish: The Gay/Straight Alliance.

“Maybe I’m getting life right,” Kubinski said. “When you’re too far into yourself, I think for me, the Achillie’s Heel of that is, I can really start to overthink everything. Get like, I don’t know if I’m doing it right. Like, am I getting this right at all? But, then you talk to other people you realize, everybody is on this journey. Everybody is striving for something, trying to make something to work, feeling like they have to shift something to get something in balance; and it’s just this ongoing experience of being human.”