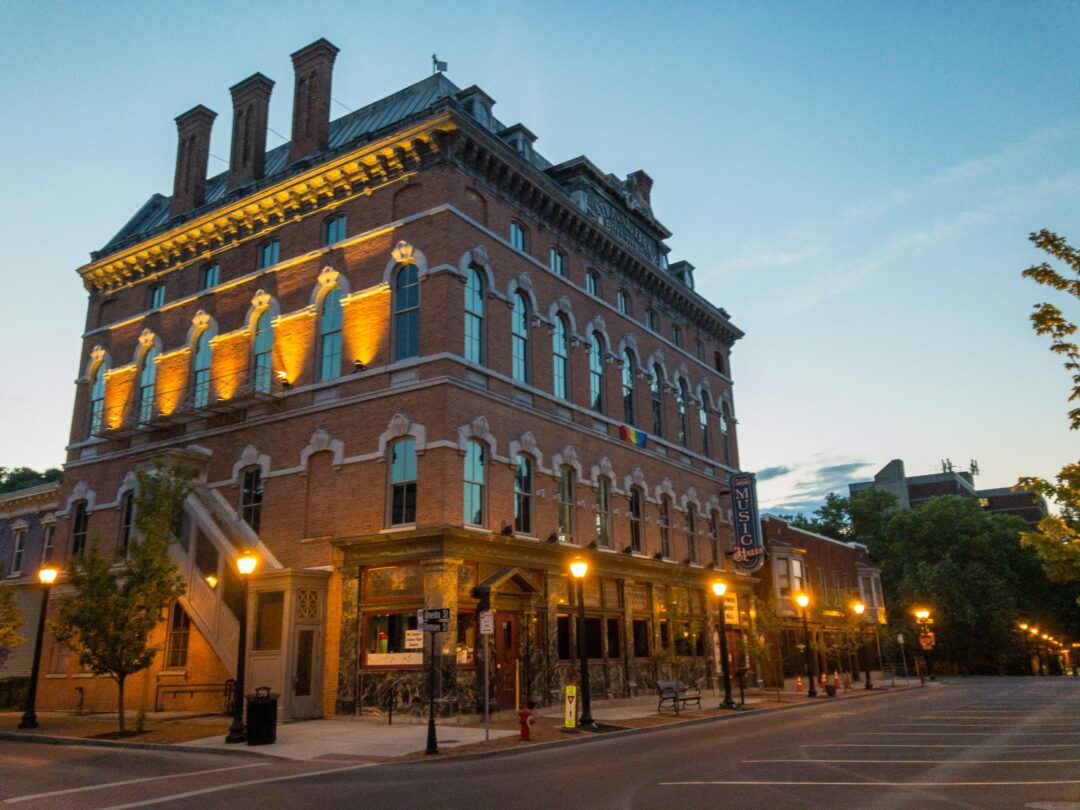 COHOES — When the city’s Common Council voted to cancel the contracts of both the Park Playhouse and Music Hall Arts Alliance in May, it was at the new mayor’s suggestion as he saw the city losing money. The City of Cohoes paid out more than $285,000 in Music Hall management costs and show support in 2019, receiving back just $90,326 in ticket and other revenue.

“Through this agreement we are able to save Cohoes taxpayers around a quarter of a million dollars annually while sustaining the arts and the vibrancy of our business district” said Mayor Bill Keeler. “This implements a business model that is fiscally prudent for the City of Cohoes for years to come, thus assuring the viability of the Music Hall over the long term.”

Playhouse Stage Company’s proposal, one of six that was reviewed by the city, promises to continue programming in the Music Hall for the next five years, while saving taxpayers between $200,000 and $300,000 annually.

“It is our goal to bring a variety of entertainment to the stage, while making the theater accessible for everyone in the community” said Park Playhouse Producing Artistic Director Owen Smith. The theatre group has called the Music Hall home for nearly four years, and has been a part of a larger collaboration of entities that have ushered in stand-up comedy, live music and a variety of other acts. “The entertainment people have enjoyed at the Cohoes Music Hall for the past several years will not only continue on my watch, it will improve in quality, and there will be more of it.”

The contract will be presented to the Cohoes Common Council at their next meeting on Tuesday, July 28.

“This is a definite step in the right direction,” said Gil Ethier, deputy majority leader of the Albany County Legislature. He was among the dignitaries present at the city’s announcement two weeks ago inside the storied venue. “It’s a good anchor for the city.”

The Cohoes Music Hall is 146 years old. In relation to Troy’s famous stage, the Spindle City’s is just four years younger. It had, however, struggled to maintain relevance over recent years. Nippertown published a critical editorial days after the reins were passed down to Smith’s company. In Michael Hochanadel’s words, the Sammy-award winning entertainment journalist detailed years of stumbling operations at the Music Hall, either due to bad luck, ineptitude or bureaucracy; all of which caused the stage to go silent for years at a time. Which is why he seemed more curious by how the city severed its ties with Music Hall Arts Alliance.

Following a near six-year tenure as Palace Theatre’s executive director, Holly Brown took over the lead management role at Cohoes Music Hall in 2018. Prior to the move, she had already orchestrated a collaboration between the two halls, bringing shows to the struggling Remsen Street venue. To date, the Music Hall has hosted more than 270 performances during her time in Cohoes. Last year, Times Union readers named the Music Hall the “Best Small Live Music Venue” in the Capital District.

The common denominator between the winning and losing proposals — besides money — is what kind of entertainment landscape will exist in the coming months? Since March, the virus has already cost Cohoes more than $1 million in lost revenue due to decreases in sales tax and reductions in state aid.

Company. While one company promised success based on past experience, another expressed continued growth previously stunted by paying rent to the other.

“I understood from the mayor when the contract was cancelled that it was done so as a result of the financial shortfall the City was anticipating from the effects of COVID-19,” said Brown. “In response, we submitted a new proposal that, not only did not require any financial support from the City, but in fact, offered them $250,000 over the 5-year term of the agreement.”

Music Hall Arts Alliance had cut management and support fees from its proposed budget to Cohoes. Instead of paying Cohoes through ticket fees, the management company promised the city what it called a “flat annual ‘rental’ fee” that would total $250,000 over five years. The agreement would have paid Cohoes $15,000 this year. The rental would have increased by $5,000 each year from $40,000 in 2021 to $60,000 at the end of 2025.

Under its new agreement with Playhouse Stage Company, Keeler said Cohoes will pay nothing for management costs or show support and it will receive $2 for every ticket sold. Each proposal promised an income stream back loaded over five years. For the 2020-21 season, Cohoes won’t receive money from a per-ticket fee. That won’t kick in until Playhouse Stage Company pays $1 a ticket the following two seasons. The $2 fee won’t factor into the agreement until the final two years of the contract.

Playhouse Stage Company is a division of Albany Park Playhouse which has maintained a presence in the region’s arts scene for more than 30 years. Earning the city’s contract to manage the music hall is yet another accolade for the company born after Park Playhouse moved to Cohoes in 2018. That move was credited in part to the working relationship Smith and Brown first established at the Palace while the latter was executive director.

With Cohoes awarding the management contract to Park Playhouse, it gives Smith and the theatre company an opportunity to grow. Instead of being a tenant, it now shephards a 375-seat venue. Where its legacy will continue to be defined by summer nights in Albany’s Washington Park, its future resides in the potential growth on and surrounding Remsen Street.

The potential surrounding the new management company supplanted nearly 30 years of realized results. Last year, the Music Hall hosted 130 shows. It was the largest number of events over a four-year span that continued to grow from just 38 shows in 2016. Brown showed the same propensity for growth during her five years at the Palace. The number of featured events grew from 77, prior to her first year, to 170 the year before she left for Cohoes.

Brown first earned success in Florida. For ten years she managed marketing for the 20,000-seat St. Pete Times Forum in Tampa, Florida. She directed marketing and public relations for half of those years, assessing the viability of events. The arena was ranked among the top grossing venues in the world, and the highest grossing in North America. She later moved on to direct marketing for the Ruth Eckerd Hall in Clearwater.

Ruth Eckerd Hall presented more than 200 events a year, hosting a variety of shows that featured Broadway, dance, pop, jazz and comedy — similar to the type of lineups she would later usher into Albany and Cohoes. In a theatre slightly smaller than the Palace, Brown helped it become the top-ranking venue of its size in North America for tickets sold.

“I have been closely involved with Park Playhouse since my time with the Palace, and am very committed to their success,” Brown said. “However, I’m sure I don’t have to say that I am deeply disappointed by the City’s decision. … This coupled with being named ‘Number One Small Live Music Venue’ in the market last year makes me think that the City’s decision was based on something else.”

Two hours before Cohoes’ press conference to announce Park Playhouse as the new managing company, Brown informed the Music Hall’s 22,000 patrons of the news in an email blast.

Keeler has said from the start the decision was over money; the city could neither support the contract with the management company, nor the one for Park Playhouse. Severing ties with the two companies was to save the city approximately $200,000 this year.

“Regrettably, as a result of the COVID-19 pandemic it has not been possible to have performances at the Music Hall since March, and will not be for the foreseeable future,” Keeler said in a statement in May. “However, I am planning for the time, perhaps 2021, hopefully sooner, when the lights are back on and the seats are filled. I envision an eclectic mix of professional and community programs – theater, music, comedy, dance – that will appeal to people of all ages and interests. None of that would be possible if we did not take the actions we are taking now.”

Theatres across New York closed their doors to the public in mid-March amid state-mandated novel coronavirus-related shutdowns. The shutdowns meant to mitigate the spread of the virus have caused a strain on the economy as it has limited public access to only businesses deemed essential. The shutdown of restaurants, bars and retail stores left municipalities across the board without income from sales tax. According to New York state, counties outside of New York City are projected to lose a combined $2 billion in revenue from sales tax this year.

When Keeler read Brown’s proposal, promising the $250,000 over five years, he said, “it was just a number.”

“There wasn’t a path to get there,” the mayor said. “Owen had a clear path. No knock on the previous management team. … I liked the vibrancy.” He acknowledged how the three finalists, including Guthrie/Bell Productions, worked together to put on “good shows” and hoped Music Hall Arts Alliance would return to do more. “But, it was a financial decision more than anything else.”