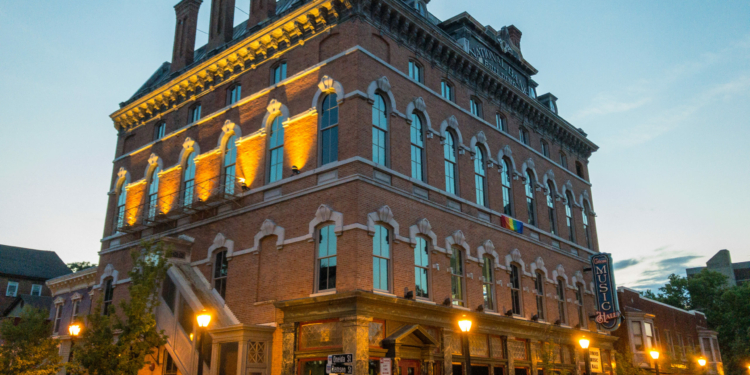 COHOES — It’s Sunday evening and Cohoes Music Hall’s marquee hangs dim across Remsen Street. Virus-related shutdowns have kept the historical hall quiet for more than three months, but there’s been a constant buzz surrounding it since the city canceled the contract with the group managing the storied stage.

A review committee is soon expected to interview a field of six candidates vying to manage the historic playhouse. The collection of candidates includes Just Imagine from Rensselaer, The Hall from Niskayuna, and Lopolito from the Lower Hudson Valley.

Guthrie/Bell Productions is among the groups applying for the management role. Its proprietor Greg Bell has been promoting music acts in the Capital District since 1992, and has brought several shows to Cohoes over the years.

“Just the fact that Guthrie/Bell Productions has a 1 in 6 chance of managing The Cohoes Music Hall is so exciting,” said Guthrie/Bell Productions spokesperson Kim Neaton. Their application is submitted in partnership with Creative Concerts. “We wouldn’t be doing this if it was just any venue, this isn’t just another business opportunity to us. Greg Bell and I have fallen in love with the venue over the past few years, and want to be a big part in helping downtown Cohoes continue its growth.”

Park Playhouse and Music Hall Arts Alliance have each submitted separate applications after calling Remsen Street home over the past two years. Holly Brown, executive director of Music Hall Arts Alliance, helped orchestrate the playhouse’s move to Cohoes from its former home at The Palace Theatre, of which she managed before coming to the Spindle City.

Both entities had contracts with the city until the end of 2022, but those agreements were voided by the city in May after a suggestion from Mayor Bill Keeler. Keeler, who replaced Shawn Morse as mayor in January, said he wanted to restructure an agreement that didn’t cost the struggling city.

Keeler has said severing ties with the two companies was to save the city approximately $200,000 this year. The former contract with Music Hall Arts Alliance alone called for the city to pay a management fee of $90,000. In turn, the city would have received $2.50 for each ticket sold. Last season, the City Hall received back $38,000.

approximately $450,000, 20 percent of which was from the city. The city agreed to those terms prior to Keeler taking office. She had previously expressed her disappointment over the city not affording her group a chance to work out a new agreement without terminating the contract. She worried that financial struggles associated with temporary shutdowns was prompting the city into the decision.

“Finalists will be interviewed by an expanded board and recommendations will be submitted to the Common Council in early July,” Keeler said in a statement. “A new management contract is anticipated to be in place by late July, with significant savings to Cohoes property taxpayers.”

The review committee includes Fran Delsignore, owner of The Vocal Studio; Michelle Schifley, senior director of University Auxiliary Services Administration at the University of Albany; and James Bouchard, city treasurer. The board is co-chaired by Ralph Pascale, owner of Spendwood School of Dance and Gymnastics, and Sal Prizio, program and event manager at Proctors Theatre.