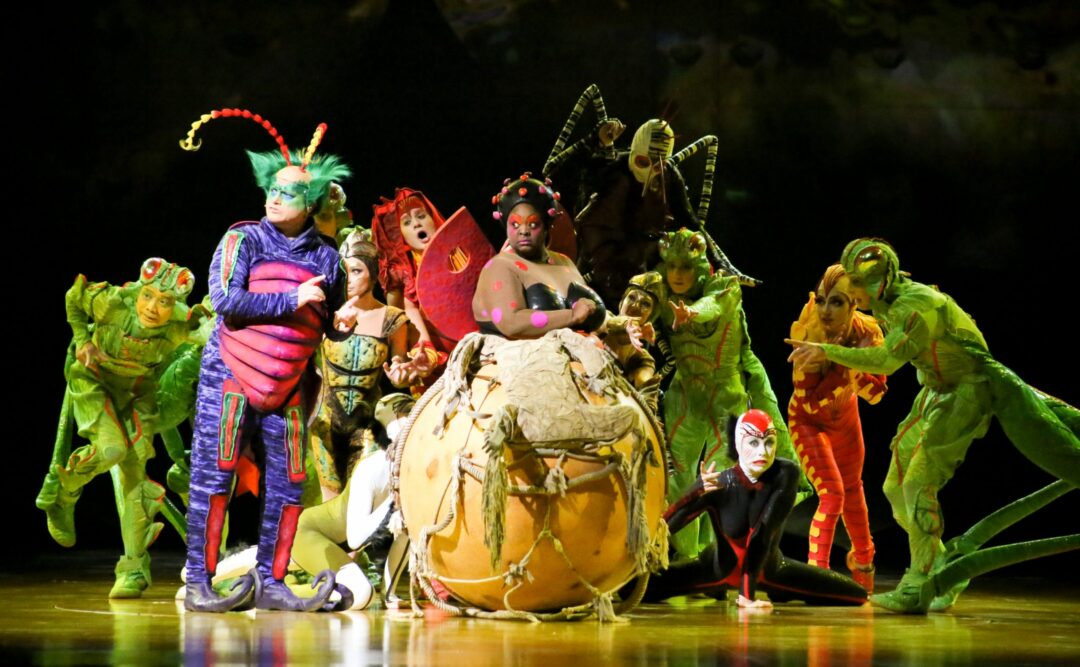 ALBANY — A swarm of words buzz within the mind as one tries to describe Cirque du Soleil, not one of which would be dance — not in Christopher Houston’s mind. To him, it’s more than just dance.

The contemporary circus displays incredible feats of human strength and agility married with choreographed movement, colorful costumes and live music. It tells a story. It has drama. But, what separates Cirque du Soleil from theatre is a fantastic display of acrobatics.

“The foundation upon which we build all these incredible tricks can always be whittled down to the most fundamental skill, and maybe add an extra flip, an extra twist. The development of that will take many weeks, many months,” said Houston, the artistic director of Cirque du Soleil’s traveling production of “Ovo.”

Houston speaks of acrobatics though his résumé reads like that of a dancer’s. That may be because, if you whittle him down to his beginnings as a young boy in Scotland, you’ll find a gymnast. Though, that was only the first step to an altogether different destination.

“Growing up in Scotland, in a working class family… long before ‘Billy Elliot’ ever existed, there were many like him while growing up,” said Houston, referencing the acclaimed Stephen Daldry film that has similar parallels to his own life.

Houston started out in gymnastics. When he was about 14, a growth spurt forced him into acrosport, a cousin of artistic gymnastics. In hindsight, Houston sees acrosport as having a bit of a circus discipline. There are hand-to-hand movements, the throwing of your partner in the air (and catching them), and a large portion of it involves dance. In artistic gymnastics, men don’t dance but in acrosports they do, requiring the need to work with dance instructors. Houston’s dance instructor pushed him hard into the discipline, insisted that he attend summer school and to participate in plays. “It planted the seed,” he said. He recalls watching a hand-to-hand couple perform on a VHS tape recording of Cirque du Soleil’s “Saltimbanco.” As he watched, he allowed himself to wonder, “Oh my god. Maybe one day, I can do that,” he said.

“All of my family, they were involved in football and I just had very different passions. And, it was quite a shock to the family when I said I was heading to London to study theatre. It was very much, ‘How are you going to work?’”

Houston’s passion for performing arts led him to London. His career highlights include performances in “Miss Saigon,” “Cats” and “Chicago.” He’s created work for Michael Flatley, worked with Susan Stroman, performed in London’s West End, New York City’s Metropolitan Opera and all around the world. But, his path shifted from theatre to Las Vegas through Franco Dragone. The former artistic director for Cirque du Soleil was working with Celine Dion and he sought after dancers to perform during her “A New Day” residency at The Colosseum at Caesars Palace.

Houston jumped at the chance. He auditioned in London and earned one of 50 spots for “A New Day.” The ticket to Las Vegas offered more than the opportunity to dance for Dragone and Dion. Houston was thinking a few steps ahead. He would continue to be paired with the Grammy Award-winner during her “Taking Chances World Tour.” Once the tour ended in 2009, Houston returned to Las Vegas and took that next step: he became dance captain of Cirque du Soleil’s “Viva Elvis.”

“There are very few companies in the world where I can channel all of my passions, which is truly acrobatics, dance, live theatre.”

Cirque du Soleil comes to Albany with the showing of “Ovo,” a headlong rush into a colorful ecosystem teeming with life, where insects work, eat, crawl, flutter, play, fight and look for love in a non-stop riot of energy and movement.

Taking the Portuguese word for egg as its name, Ovo starts when a mysterious egg appears in their midst, the insects are curious about this iconic object that represents the enigma and cycles of their lives. It is love at first sight when a gawky, quirky insect arrives in this bustling community and a fabulous ladybug catches his eye – and the feeling is mutual.

“Even though it’s supposed to be an insect world, everybody can relate to the situation,” said Jorn De Laender. The Belguim-born performer represents one of 52 performing artists from 14 different countries. “I would say, it doesn’t matter who is who. Everybody is a good person, and we just need to get to know who someone is. Get the chance to know someone without judging.”

De Laender’s primary role is that of a cricket, though he’ll also stand in as a mosquito and sometimes as a fly. Each requires a contrast in movements from one to the other. As the cricket, there is an emphasis on mimicking the sharp angles in the insects’ appendages. For the role of the mosquito, De Laender said he spent a week growing accustomed to walking on stilts. As an athlete, the task wasn’t too difficult. Before joining Cirque du Soleil four years ago, he was a competitive gymnast. But, as the fly, he needed to learn how to be a clown.

“That’s a very different world for me to become a clown,” said De Laender. “I’ve noticed a different transition in exploring that side of the performance world. Which, it has been interesting for me, because I’ve never done anything like that before.”

Since its Montreal premier in 2009, “Ovo” has thrilled more than 6 million people worldwide as a Big Top show. Since 2016, the show performs in arenas, featuring over 10 different high level acrobatic acts such as foot juggling and Icarian Games, hand-balancing, contortion, aerial straps, slackwire, Russian cradle and a signature final act mixing trampoline, tumbling and rock-climbing.

“It runs the spectrum of live entertainment,” said Houston. Though he won’t describe Cirque du Soleil as dance, he recognizes its role in his production. The muscle memory, afterall, is still triggered at cue. At 41, he’s just a few years removed from his performing days, but he said he still “flies” with his dancers.

“Yes. You’re getting dance on the stage to help with some of the transitions and to help with setting the mood, but you’re also getting the voice,” said Houston. “They’re not speaking any language that you’ll recognize — we’re trying to be insects. … Then you marry that with this insect-like movement.

You’re creating something that’s never been seen before.”

Ravena and Coeymans looking at a curfew for children under 15