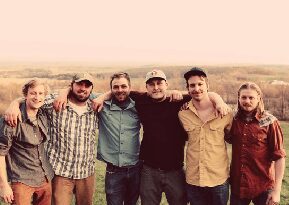 COHOES — Eastbound Jesus announced last week the release of its newest studio album along with the release party it plans to hold at The Cohoes Music Hall.

“Full Moon Over Salem,” the band’s fifth studio album, is due out on Saturday, Feb. 1. The release will be celebrated at The Cohoes Music Hall on the same evening.

“We spent four years writing and performing these tracks before spending the last year recording it,” said Carl Anderson. “After releasing four albums in five years it was important for us to take our time with this one.”

The Greenwich natives previously released four studio albums, and one live album, the most recent being 2015’s “Hollerin’.”

“It’s always been a goal to elevate our songwriting while remaining true to our signature Eastbound Jesus sound,” said Anderson. “Over the past year we have picked away at the songs, playing around with pedals and amps to find new tones, and trying different recording styles to elevate the compositions.

The six-piece “Northern Rock” band has performed on some of the biggest stages in the region; from The Palace Theatre to headlining Alive at Five. In partnership with Greg Bell of Guthrie/Bell Productions, they have also produced the Eastbound Throwdown, an annual two-day music and camping festival on Irwin Farm in Salem.

The band is comprised of six friends: vocalist and guitarist, Adam Brockway; vocalist and banjo player, Luke Anderson; electric guitarist, Dylan Robinson; bassist, Dave Wright; lap steel and electrict guitarist, Zack Infante; and Anderson on drums. Their music draws from a diverse range of influences, from bluegrass to country to rock and roll and beyond.

Anderson said the new album will feature collaborations with guest artists, too.

“We gave ourselves the time to bring in a number of guest musicians, and to really work through each track sometimes changing and re-recording our parts to get them where we wanted them,” he said. “Now it’s time to put the album out there and hopefully everyone will appreciate all the work that has gone into it.”

DISCOVER GLENMONT: A peek into the school days spent at District No. 7 Schoolhouse