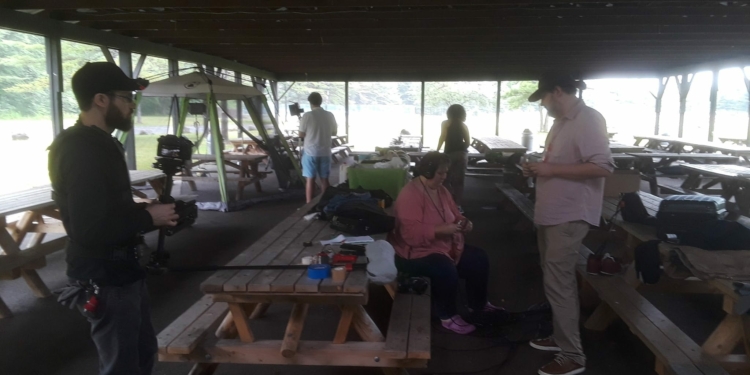 The crew on set. Photo via Joe Murphy

BETHLEHEM — Climate change seems like a serious issue upon first impression. Images of melting ice caps, struggling polar bears and severe weather conditions may come to mind; it is even a topic brought up in politics.

Murphy, a Delmar resident who has made environment-related films over the years, said his team had just completed filming for a comedy-mockumentary called “Earth Day 2030” which focuses on a small town in upstate New York that deals with the effects of climate change in 2030. “We’re trying to get people thinking and talking about climate change by first getting them to laugh about it because it’s a difficult topic,” he said. “Humor, I think, is an approach which can reach everybody.”

He explained that as a passionate environmentalist, he recognizes that it’s difficult to make widespread environmental change if people are not ready for it and “that’s when I think culture and communication come in. Climate change is something we read on the news or we hear politicians talking about what the laws should be about it. But not a lot of people have really felt climate change emotionally and if we get people to experience it — even fictionally like what climate change is like in the future — they can feel that and may be more open about it and make changes in their lives and society.”

He added that he found it curious that there are not many major films that directly discuss climate change, although some have used it as a secondary plot element. He brought up 2004’s “The Day After Tomorrow” as the last major film he could think of, for example, that mainly concerned climate change.

“Earth Day 2030” is a short film, he said, which may be 15 minutes long and filming took four days to complete — Tuesday, June 25 at the Elm Avenue Park and the other three days in Voorheesville. Murphy had been granted unanimous approval by the Bethlehem Town Board to film in the park, for which he expressed gratitude.

He also brought up that his whole cast are actors from within New York state. “The vast majority are in or around the Capital District and two actors are from New York City,” he said. “I thought it was unnecessary to go too far because we have lots of talent in the area and the city. Everyone we needed was right here. … The more we develop this industry here, we can also provide more employment for local actors and tradespeople.”

Murphy said that the film was able to receive almost $5,000 via a crowdfunding campaign on Seed and Spark, a crowdfunding site used by and for independent filmmakers. He explained that the money came from individual contributions from people across the country, particularly from Albany, New York City and even California. Such money was used to cover production costs, pay the cast and crew, rent out equipment, and facilitate transportation. However, additional funding is needed, he said, for editing and entering the final film to film festivals which have entry fees.

Looking ahead, Murphy said he is hoping to finish editing “Earth Day 2030” by the fall so that his team can start submitting it to film festivals throughout the state and country, which may take up to a year long.

Already encouraging the public to watch and support film, Murphy said, “If you watch this film, you’ll come away understanding climate change in a new way and you’ll have fun.”

Delaware Avenue road diet is slated to launch in 2021