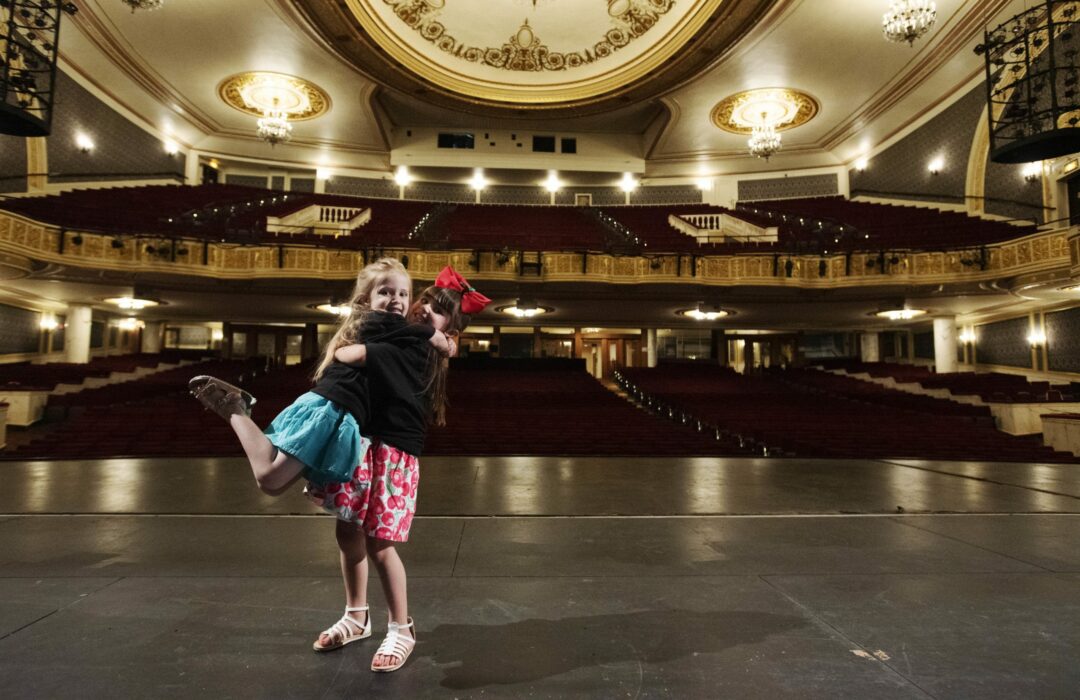 Viviana DiMezza, 5, of Perth, right, lifts Genevieve Carmichael, 4, of Amsterdam, on the Proctors stage after the announcement the two will share the role of Lulu in Waitress at Proctors Friday, May 31, 2019. The girls were selected out of about 40 local 4 and 5-year-olds who auditioned for a national casting director at Proctors for the role of Lulu, the daughter of the lead character in Waitress. Waitress is at Proctors June 11-16.

SCHENECTADY — The Tony Award-nominated musical “Waitress,” at Proctors, June 11 to 16, has cast two young local actresses to take on the role of Lulu during its Schenectady engagement.

Genevieve Carmichael of Amsterdam, and Viviana DiMezza of Perth will alternate the role of Lulu, daughter of the production’s main character, Jenna, an expert pie baker working at a local diner who is stuck in a loveless marriage and finds her salvation through her child.

Both girls were chosen via an April 30 audition process held at the Fenimore Asset Management Gallery at Proctors. Nearly 40 hopefuls participated in the auditions, which were presided over by associate casting director Dayna Dantzler.

Carmichael and DiMezza will each appear in four performances during the Proctors run.

Dad, Andrew Carmichael, brought Genevieve, a preschooler at Whispering Pines, to her audition, a new adventure as the 4-year-old has no previous acting experience.

“She was excited and antsy to go in to meet with Dayna,” says mother Jamie, “but she was a little sad she didn’t get to go on a ‘real’ stage, like her older sister Maggie, who is a dancer.”

Carmichael says Genevieve brightened up about the latter in a big way upon learning she’d landed the role.

Michael DiMezza says his 5-year-old daughter had a great time, telling mom, Jenelle, on arriving home, that “I got to run and talk and do a little dance.” Like Genevieve, Viviana, who attends The Learning Community at Broadalbin Perth, has no previous acting experience, but will have worked on an Actors’ Equity contract by the time she is done her role as Lulu.

Discover all of Albany County