Actor will walk away after more than 500 ‘Phantom’ shows 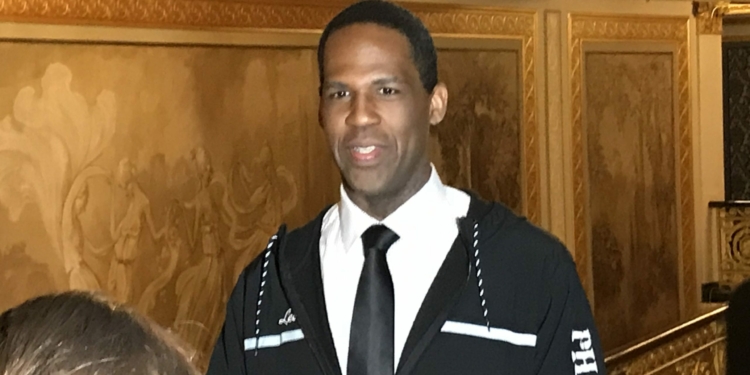 SCHENECTADY — Villains are bold by definition, and the boldest of these fictional “bad guys” tend to be our favorites.

Few antagonists rank higher than The Phantom in Andrew Lloyd Weber’s “Phantom of the Opera.” Despite being a man who hides behind a mask and lurks within the shadows of The Paris Opera House, nothing is as stunning as when he announces his presence among theatre patrons in the masquerade scene.

Quentin Oliver Lee plays The Phantom in Cameron Mackintosh’s touring production of the iconic musical that has stopped at Proctors in Schenectady, from now until Sunday, May 5. Standing six feet six inches tall, and possessing a deep operatic voice, Lee is a commanding presence while on stage. He, is perhaps, the most stunning.

Based on the classic novel “Le Fantôme de L’Opéra” by Gaston Leroux, The Phantom Of The Opera tells the story of a masked figure who lurks beneath the catacombs of the Paris Opera House, exercising a reign of terror over all who inhabit it. He falls madly in love with an innocent young soprano, Christine, and devotes himself to creating a new star by nurturing her extraordinary talents and by employing all of the devious methods at his command.

However, it is a classic case of unrequited love. Once that’s realized, everything starts to fall apart. The Phantom is simply cast as a villain. However, after wearing the mask for more than 500 shows, Lee finds that he’s a character that is more misunderstood.

“I don’t think the Phantom thinks of himself as “the bad guy,” said Lee. “His audacity comes from his determination to be heard.”

Lee said that his character has something that needs to be said, and that he wants to share it with his love interest, Christine. However, a terrible accident scarred his face. In fear, he retreated to the city’s catacombs to escape the judgment of onlookers. That aspect of his character resonates with Lee, as his height caused him to struggle with fitting in with kids as he grew up. “It’s not something I talk about often. I was never very popular and often felt like a misfit, which is similar to how the Phantom feels, and that is too easy to relate to.”

Among other traits Lee said he feels people can relate with the Phantom is “being misunderstood, fighting for what we want, [and the] desire to be praised and heard.”

Mackintosh’s production of Phantom reinvents the visual presentation of the story, said Stage Manager Mitchell Hodges. New scenic designs with special effects apply a fresh and new cinematic focus on the main characters in each scene. With a cast and orchestra of 52, this is one of the largest productions on tour in North America.

Lee portrays The Phantom with Eva Tavares as Christine Daaé, and Jordan Craig as Raoul. The rest of the cast is defined by Trista Moldovan as Carlotta Giudicelli,’David Benoit as Monsieur Firmin, Rob Lindley as Monsieur André, Susan Moniz as Madame Giry, Phumzile Sojola as Ubaldo Piangi and SarahGrace Mariani as Meg Giry.’

The largest cast member, weighing in at an estimated 2,500 pounds, requires the most attention.

The chandelier that hangs above the crowd is unique to the touring production. Hodges said the ten-year-old piece is stored in a cage as it travels from city to city. Structural engineers visit each venue prior to a show to confirm accommodations. Approximately 40 man hours go towards its installation.

When the tour picks up from Schenectady, the chandelier will go back into its cage for another show. Lee, however, will not continue. A Proctors audience will be the last to see him play the Phantom.

“After so many shows of embracing the mask, I’m sure much of who he is will continue to live in me,” said Lee. “But, there is a certain power and authority that the Phantom has, which you don’t get to experience in regular life. That, as well as the wonderful people I’ve met along the way, will be missed.”