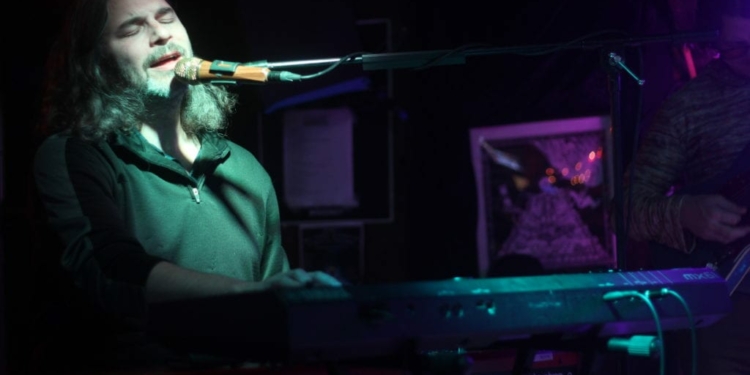 Whether in Northampton or the Capital District, if there is a Funk Night, Beau Sasser is at the organ. Amy Modesti / TheSpot518

TROY — It was Funk Night at the Rustic Barn Pub. Beau Sasser’s Escape Plan, featuring Albany’s Justin Henricks, brought out the funk as they welcomed in spring at their return to the venue.

The Northampton, Massachusetts-based band features vocalist Beau Sasser double-timing on the Hammond Organ, guitarist Dan Thomas, drummer Jimmy “The Italian Stallion” Robitaille, vocalist Ali McGuirk vocals, and Justin Henricks on guitar and vocals. Together, this border-crossed band got their fans to dance and enjoy an evening of funk, blues and soul on a snow-covered spring night.

“We’re keeping Aretha Franklin in our hearts,” called out McGuirk after covering her own unique spin on Bad Company’s “Rock Steady.” McGuirk and company throughout their two sets, paid homage to the late soul singer in their beautiful renditions of “Baby I Love You,” “(You Make Me Feel Like) A Natural Woman,” and “Save Me!!” Franklin’s music, especially in the genres of funk, blues, and soul, had made an impact on Beau Sasser’s Escape Plan. Through Sasser’s tasty piano solos and McGuirk’s sassy vocals, they were able to breathe new life into these iconic songs.

Since being in their current lineup for six months, the group decided to stick with playing cover songs for the show. Hearing the musical tightness of each cover song being performed, you wouldn’t realize that they’ve been an ensemble for only a short period of time. Their sets were tight and entertaining, and each song performed was covered with its own musical twist that was unique and captivating to their audience.

From their up-tempo disco- like version of Stevie Wonder’s “Signed Sealed Delivered,” playing a Frank Zappa tune that was inspired by both “Sticky Feet” and Sasser’s “Feeling Alright” (Joe Cocker) piano rhythm, to a shortened, jazzy version of The Allman Brothers Band’s “Whipping Post,” it was interesting for me to watch and hear these iconic tunes being covered well by this band! Their cover of James’ Brown’s “Cold Sweat,” allowed me to observe the band’s chemistry and hear the outstanding soloing among Sasser, Thomas, Henricks, and Robitaille who played the drums with the additional assistance of a tambourine to make additional noise to the jam-based song.

McGuirk returned to the stage for their final set to sing, “Can’t Hide Love,” “Taxman” (The Beatles), “Love the One You’re With” (Crosby, Sills, and Nash), “Save Me” (Aretha Franklin) which included Thomas using his lighter as a slide to perform his solo since leaving his slide upstairs, among other 60s-70s inspired songs that were enticing! McGuirk, apart from her work in Beau Sasser’s Escape Plan, will be performing in Woodstock on April 11, although little details are known about the time and venue of where her solo gig will take place. She announced her upcoming show towards the later part of the gig after performing a great rendition of “Taxman.”

It took me until their second set to warm up to the band once I had become acquainted with their song selection and their musical style of performing. Their musicality and the talent that each member expressed through their guitar riffs, piano soloing, and vocals left me feeling impressed. I even danced to their songs. Their audience and venue, moved by their music, wanted to hear the band perform two encore songs that they had never performed live; “Uncle Remus” (Frank Zappa) sung by Sesser, and another song that I was unfamiliar with, featuring McGuirk on lead vocals, to close out the evening.

Spring fever sprung at the Rustic Barn Pub as Beau Sasser’s Escape Plan came into town to shake those winter blues away and to welcome spring with some good funk, blues and soul.

REVIEW: Jocelyn & Chris Arndt’s ‘The Fun in the Fight’