Glenn Slingerland has been letting us know when our weekends come to an end for 32 years, and he’s still doing it 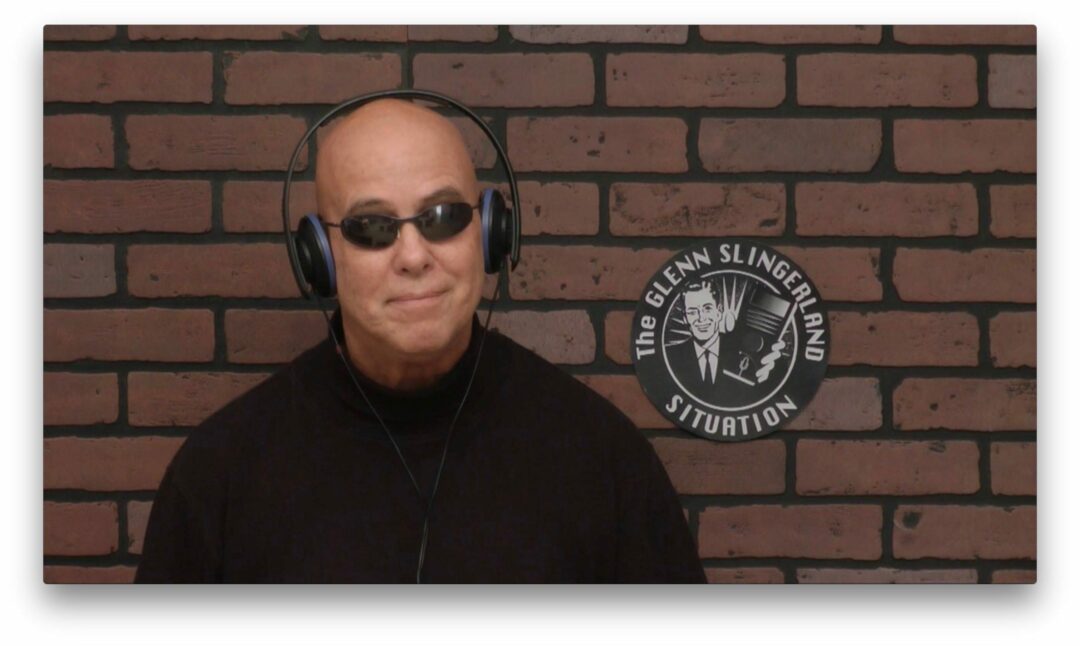 Whether you know what the Situation is or not, you’ll recognize the look.

The Glenn Slingerland Situation has long survived its birth in radio, as it continues to live on as a visual medium. That visual, that picture, whenever the Situation is mentioned, is

Albany Noir. It’s a movie scene sharing an existential message with a Capital District backdrop. It’s beautiful women in tight black dresses with hems so short and heels so long their legs stretch out to Schenectady. Expressionless faces behind dark sunglasses conceal a need-to-know mystery to which you’re never privileged to learn.

Slingerland, himself, comes across as an enigma wielding power. He, too, is always in black. Black shirt. Dark sunglasses. His ebony headphones framing a perfectly contrasting picture around his cleanly shaven head. It’s as if J.R. Dobbs of the Church of the SubGenius died and was reborn, instead of a caricature of a 1950s salesman, but into a 21st-century club DJ. He’s got a message you need to hear. His weekly Sunday show greets viewers with the declaration, “The weekend’s not over until we say so.”

Who are we to disagree?

The Situation is a trip. Slingerland recalls being enveloped into weekly episodes of the Twilight Zone television series. The beginning of each show invited viewers into another realm. It always looked like our familiar world, but it never failed to spoon-feed a fable we would never have sat

through if left naked on its own.

From a narrow, twisted alley

Even the show’s early introduction use to resemble something out of the old radio serials. Placing the audience in another dimension to suspend reality. For Slingerland, this vehicle was the visual of a “narrow, tristed alley.”

Slingerland’s message is all about music. Whether he’s throwing in a B-side from a long-distant track or showcasing a song from a local band, he’s gift-wrapped an auditory package in a visual concept abandoned by Viacom’s MTV more than a generation ago.

The Situation started in that bright, neon world. Where hairstyles threatened to destroy the ozone layer, and zebra-stripped clothing seemed like a good idea at the time. MTV stood for Music Television, and in 1987 it continued to drive music and pop culture. Video, and deregulation nearly killed radio. The cookie-cutter formula that dominates the airwaves today was something Slingerland could avoid on television.

“If you invite friends over and listen to music, as we all did, you sit around, you have some fun, you be a little silly and you listen to good music,” said Slingerland. “That’s all we’re trying to be.”

Each episode features a trio or more of women dressed in the now iconic style of dark sunglasses and black dresses, called the Situation Stars. Slingerland said it is not a homage to Robert Palmer’s 1985 hit “Addicted to Love.” Nonetheless, they walk across the screen in a noir setting. No speech, and partaking in actions that sometimes leave you guessing. In 2019’s sensitive climate, Slingerland said all of the power is wielded by the Stars.

“We try to elevate the women on our show,” said Slingerland. Often times a sense will include a male

counterpart or a “Fall Guy” who finds himself stepped on or on the short end of a leash. “The women are always in a superior position.”

Comedian Aaron David Ward has provided humorous commentary towards the end of each episode for the past 12 years. His appearance on the show is different from his stand-up routine. He evokes the vision of another local icon when he calls his contribution, “Andy Rooney on acid.”

While preparing for this article, I came across a comment on social media. The man was sharing the story of a moment he shared at a local bar. In my mind, it was Blue 82. “We’ve been there,” said Slingerland, as I pass the story on to him. Each Saturday, a similar scene plays out on the club’s doorstep on North Pearl Street. Beautiful women in tight dresses with hems so short and heels so long. The man looks around and says aloud, “Looks like something out of the Glenn Slingerland Situation. A few men at the bar chuckle, another saves himself from spitting out his drink.

They know the Situation.

Nominations wanted for the inaugural Colonie Hall of Fame class

PICK of the WEEK: Albany Comic and Toy Show kicks off again at Red Lion on Sunday