Out of the limelight since 2015, comedic superstar Dane Cook is back on tour, but don’t call it a comeback 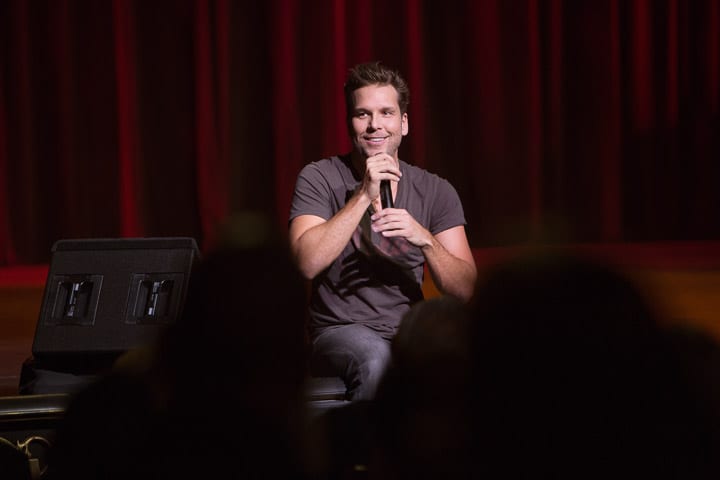 Comedian Dane Cook achieved monumental fame more than a decade ago, but has been out of the limelight over the past three years.

With his upcoming tour set to launch — with a stop at the Palace Theatre on Friday, Feb. 22 — people want to attribute the word “comeback.” An introspective Cook, however, would use a different word to define the sum of everything that has happened.

Michael Hallisey: You’ve got to be feeling strong. I’m going over your Twitter feed, and you have a lot of people coming out in support for you. How does that feel?

Dane Cook: It’s so funny. Every time, as a comedian, you get past say, a special or an album, you’re a new comedian again. It’s basically going back to basics. Back to the open mic of it all. New ideas, new premises, and at the same time, an evolution in your life. Our tastes change. Our perspective changes. So, you’re always a little bit — really — peeking out, because you’re hoping that the comedy is going to be well-received, like, fortunately, it has been in the past.

So, last year, what I did a secret, underground tour. I didn’t promote. It was just a lot of interesting locations that I never happened upon before. And, what I found was — what was so thrilling was — as I was approaching 29 years this year, people were coming up to me after these shows, or emailing or DMing me, and saying, ‘hey, I’ve been a fan. […] I was at Madison Square. I was at a show you did in Miami at The Improv.’ And, a lot of them were saying, ‘this show exceeded my expectations.’ And, when you start hearing that, it really gives you the incentive to go out there, put a label on it, and do a large-scale tour. And, after about two and a half years of working on this, we’re ready to go.

Hallisey: You wrote this beautiful post on your Instagram account, and I’m picking up that you’re being a little introspective. You admit you’ve been doing this for almost three decades now. Are you feeling old now?

Cook: I don’t know if we ever as comedians… I know I don’t feel any different, from when I first started doing comedy. What’s really incredible is, I’ve been friends with some of the legendary comedians from many, many years down the road. Jerry Lewis being one of them, who I was very close with. A mentor and a friend. And, here was a guy, 90 years old and still had a boyish enthusiasm. So, I think there’s always a little fountain of youth element in doing stand up. I don’t feel any different, but I’ve obviously have experienced different things. And, having been through high highs and low lows, I’ve got more to pull from in the minutiae of life to be able to observe and report. So, I feel great. I don’t feel like… I’ll tell you what. When I wake up in the morning, I’m as enthusiastic as I’ve ever been to face the day, and to get on stage at night, if that answers your question.

Hallisey: Obviously, just reading your posts and everything that’s happened in the past week alone, I can pick up your attitude and how you’re excited about the upcoming tour. Tell me a little about it. Because what I’m hearing is that people want to attribute the word ‘comeback’ for you. I know that’s not how you want to define it, but I definitely see something more along the lines of a change. You made reference to a George Carlin act a recent Hollywood Reporter article, in which he made a change in his routine.

Cook: Yeah, it’s kind of funny, because when people say, ‘is it a comeback?’ I say, ‘if I had become a carpenter for the last five years, and had been nowhere near a comedy club, I would say that would be a comeback.’

Truth be told, it was more of a sit back moment. I just wanted to sit back. Live my life. Fall in love. Get past all the hardships I had experienced. About ten years I went through a lot of capsizing moments in my life. All in a row, like at a very strange time. I was reaching this superstardom, but at the same time, I was at this personal strife with my life. I lost both my parents to cancer. I lost my brother because I put him in jail. He had taken all this money from me. It was a terrible, spiraling time. Eventually, when I came out of that, and I started forming my stand up, I felt I had an obligation. Before I go out there and put my name on something, I want to make sure it’s the best that I can be at this point right now.

So, two things, to answer your question. It definitely felt more like, for me, my trajectory. I always knew this was not going to be a quick run. It’s going to be a marathon. And, also accepting the fact that a career, like life, is filled with times when the phone is ringing off the hook and times when it’s not ringing at all. That’s when it’s your obligation to pick up the phone and start making it ring somewhere else, piecing together the new articles you need to present where you’re at now in your life. So, going through all that, and working on this particular set the last… it’s been about three years since Troublemaker. I directed my last special, and from that said I would take a long break. I didn’t know if it was going to be a year. Two years. Two and a half. Three years. But, I’m going to take a long break, and I’m really going to work on the Act II of my life and career. Act I was over, and it was time to take a look at where I wanted to take my fans that I’ve grown up with. You know, I grew up with a generation of comedy bits. I grew up with them. I was doing colleges to college aged-kids when I was college-aged. I was headlining all these colleges all around New England. So, I felt like I had a great opportunity having grown up with this generation of fans. To speak to how I feel and see things, today. It was really, really great. As you can probably tell, I’m very enthused to get out there and share it with more people.

Hallisey: Absolutely. Now, it’s no secret that when you came out you were one of the first acts to really embrace social media to help you get your name out there. Now, as you are getting ready for your tour, is it different. Are there more obstacles in your way? How is it different now versus when you were utilizing MySpace and other social media channels?

Cook: You know, it’s interesting. It’s actually more streamlined, and there are less obstacles. And, the reason for that is, when you’re coming to fruition, young, green in the industry, and when you starting putting together a winning formula, people see that. And, suddenly, there’s a lot of people impeding on that movement. You’re not sure if everybody is there for the right reasons. Or, if they’re giving you the best advice and you’re taking more advice because you’ve never done it before. So, I was at the helm of my own career. I was the one dictating how I wanted to be branded and perceived because I was having direct conversations with fans through this new thing of social media. But, it added way more hurdles because then I found I was encumbered and sometimes tied into things and people and contracts that, maybe, were not entirely the best fit at that time for me. But, I needed to learn that. I didn’t know that.  So, when I went through that era of hitting this magnificent high watermark in this industry, and then came down the other side and settled into some normalcy, I found that I can still have those spikes when I go out and tour. I can put my effort into a film role. But, I don’t need to live up there. I don’t need to have the machine with me always. The last five, six, seven years. It’s a lot easier to map. And, when things do get big and broad, I know how to deal with it. I’m the old bull on the hill now. I’m not the young bull, and that’s good. I’ve got a great perspective for people who I mentor. People who now come to me, young comedians and artists. I can tell them, ‘hey, I’ve been through the wringer. I’ve been through it all. But, I can also tell you what works.’ At the end of the day, it’s actually a simple equation and it leads to one word. There’s just one word that defines this entire conversation. There’s only one word that matters. There’s only one thing that would have kept me in this position, and that’s the word ‘funny.’ If I wasn’t funny, I wouldn’t be here. We wouldn’t be talking. If I wasn’t funny, people wouldn’t come back and fill out an arena or a theater, 5, 10, 20,000 people, again, and again, and again. So, it’s cool to be able to share this with the generation coming up. And, of course, what do I always tell them? Try to keep as few obstacles. Try to hone in on your voice and getting across the things you want to get across.

State Police: Speeding Colonie man had more than a pound of pot in car