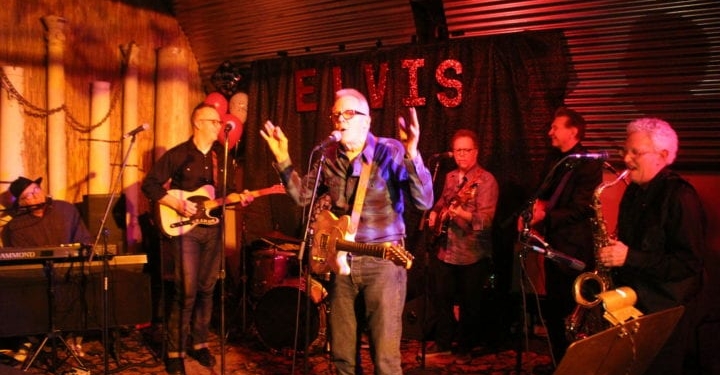 Johnny Rabb's Big Band performing as part of the Elvis Birthday Bash held at The Hangar on the Hudson in Troy, NY 1/5/19. Photo Credit: Amy Modesti

Although the “King of Rock and Roll” has passed away, his musical legacy continues to live on through his legions of fans, musicians, and impersonators that are dedicated to performing his music for generations to come. Just three days shy of what would have been Presley’s 84th birthday, Johnny Rabb’s Big Band hosted its annual birthday bash at The Hangar on the Hudson on Saturday, Jan. 5.

The Elvis birthday bash was one, huge birthday party fit for the King of Rock and Roll, from its elaborate Elvis decorations, the balloon displays created by Balloon Gal Jenny, an Elvis Banana and peanut butter cake made by Debbie’s Kitchen that was served to guests during the band intermission, to the music performed all evening by Johnny Rabb’s Big Band.

If there is one person in the Capital District who sounds like Presley and can honor his music as much as he does with his own band, it is Rabb. Rabb and the entire band had me and fans dancing and singing along to the songs all evening long.

Throughout his musical and film career, Presley had performed songs that defined rock and roll. Johnny Rabb’s Big Band performed a large number of Presley’s hits from his movies and records, ranging from “Too Much,” “Teddy Bear,” “Treat Me Nice,” “The Latest Flame,” “Little Sister,” “I Beg Of You” and “Don’t Be Cruel.”

Kelly sung “Promised Land,” and was electric with his piano play, too. I also enjoyed how “I Beg of You” and “Don’t Be Cruel” were played within the first set’s medley in. At one point during the evening, as the band busted out into  a performance of “Bossa Nova Baby” and “Viva Las Vegas, “dancers in the crowd formed a conga line. It felt like we were in Las Vegas.

The playlist continued with “Put the Blame On Me,” “(You’re So Square) Baby I Don’t Care” (sung by Graham), “Money Honey” (featuring John Tichy on vocals), “(Now and Then There’s ) A Fool Such as I,” “Blue Suede Shoes,” a reprise of “A Big Hunk O’ Love,” “Mystery Train” (with train whistling coming from Greenberg’s saxophone to express the blowing train whistle), “The Devil In Disguise,” “I Want You, I Need You, I Love You,” and “Paralyzed.” “Ready Teddy” featured amazing interplay between Kelly’s piano soloing to Graham’s guitar solos and Greenberg’s solos on the saxophone, among other classics.

“Suspicious Minds” featured the backing vocals of Tommy Love, who was called up on stage to sing and share with Graham and the band.  It was followed by “Heartbreak Hotel,” to close out the Elvis birthday bash.

The 2019 Elvis Birthday Bash at the Hangar was truly spectacular, fun, and entertaining. The band and its guests did an outstanding job in paying homage and showing their love of Presley through a tribute of his music. Happy 84th Birthday Elvis Presley.

SPOTTED: Bethlehem scores four in the third to skate away from Shaker Colonie