PICK of the WEEK: Eddie Munoz comes back to Troy to bring back The Plimsouls this week, Split Squad the next

by Michael Hallisey
in Music, The Spot
0 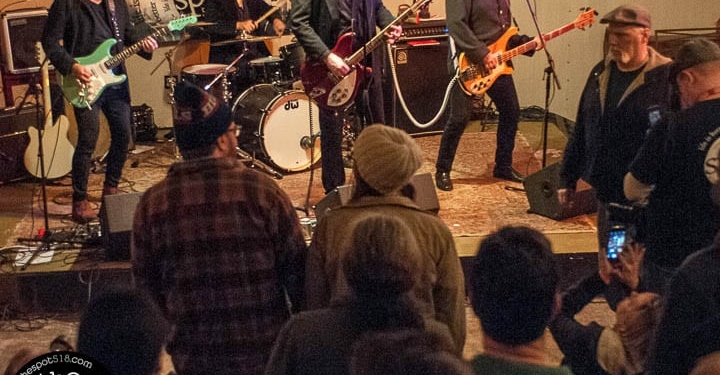 Eddie Munoz picks up the phone and I admit I have nothing to ask him. We spoke last year to preview a show he was doing with The Plimsouls at The Hangar. He’s doing the same thing next week. To prepare for that interview, I read up on everything I could about the revered guitarist. I practically wrote his life story. I figured if he got angry over a perceived lack of preparation on my part, I could go back to my notes from last year. Instead, he laughed it off. “That’s okay, man,” he said, and he proceeded to talk to me for another hour.

Fast Eddie is one of those names that serve as the litmus paper with which you test die-hard music fans. He’s not a household name by himself. That hypothetical conversation would start out as one of those old American Express television commercials, starting off “Do you know me?” Well, he made his bones playing guitar in Austin. He was the lead guitarist for The Skunks before he left Texas for the California coast. I remember him saying it was something about a girl, but he wound up with The Plimsouls just the same.

The Plimsouls developed a large following on the West Coast. The band’s presence in the Los Angeles music scene and regular play on the radio earned it the right to appear in the cult teenage love movie “Valley Girl.” “A Million Miles Away” plays on as Nicolas Cage and Deborah Foreman share their first kiss. Throughout the nearly five-minute-long scene, there are cuts to the band playing on stage. Heidi Holicker, whose character was not a fan of the power pop sound, sarcastically asked if the “noise” could be turned up any louder.

By now, you’re nodding away or you at least went to YouTube. Though Netflix and Amazon don’t currently carry the movie in their respective catalog of films, Interview magazine just revisited the movie’s merits. Writer Davina Catt wrote her best Rob Gordon-inspired Top Five list of reasons why she thought the 1983 film still stands as “one of the best teen films ever.” The Plimsouls is listed among one of those five.

The Plimsouls still play today, though without its original frontman Peter Case. Soon after the record deal, Case broke off to go solo. Munoz has been playing with vocalist/guitarist Richard Dev Greene (Pale Moon Gang, Palmyra Delran), bassist Luke Miller, and drummer Danny Vozzo (Pale Moon Gang). In August, they all played at New York City’s The Bowery Electric. A neighborhood with a piece of rock history Munoz by-passed when he left The Skunks in Austin. While he was on his path with The Plimsouls, his former band packed up and earned success on the East Coast. Nonetheless, a review of the show ushered in The Plimsouls’ “return” to the Bowery.

Gigs come around easier on the East Coast now that Munoz calls New Jersey home — he fell in love with a Jersey Girl. Philadelphia and New York City practically share suburbs with one another. It makes finding a place to play easy compared to the 300-plus miles between Los Angeles and San Francisco. The Bowery Electric is just one of those places. A good venue at that. And, judging from the Charley Crespo review, The Plimsouls “did right by the band’s legacy.”

Crespo is a Manhattan music reviewer who describes himself as scouring the city “listening to its heartbeat.” The nightlife veteran brought up the band’s vintage on more than one occasion in his August review. The years helped frame a glowing observation of a well-tuned band performing songs “slicker than the initial versions,” he wrote.

Crespo’s words reminded me of what Munoz shared with me last year. He can’t put out an uninspired “Holiday Inn” performance.

“Basically, these songs have stood the test of time,” said Munoz. “The people just want to hear the music. They want to hear it live and loud.” He added how skeptics have shared opinions on the internet, stating the band can’t be the same without certain people. Munoz doesn’t name those “so and so’s.” “Actually, you can,” he said. “I try to surround myself with the best musicians I can find, and this time around, these guys are real good.”

I joke with Munoz over the prospect of him buying property here now that he visits Troy so often.

“It’s nice up there,” he said over the phone from Jersey. “The winters suck, but it’s pretty up there. I dig it.”