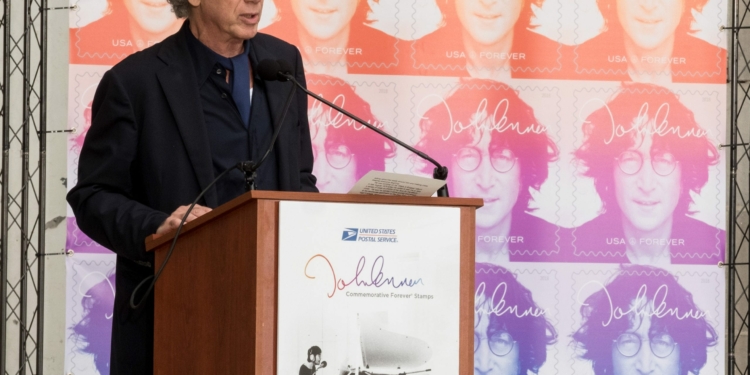 Photographer Bob Gruen shares his admiration for Lennon. His photograph was used for the new stamp. Courtesy of U.S. Postal Service

Preceding the ceremony to unveil the new John Lennon stamp, his late-Beatle’s wife expressed gratitude for the throngs of fans who gathered at the Naumburg Bandshel in New York City’s Central Park for the event.

“Even if it was five or 10 people, I would have appreciated it,” said Ono, with their son Sean at her side. “But, look at this. This is beautiful.”

Instead, hundreds of fans gathered to pay tribute to a complex man who first stirred teenaged girls into a frenzy and later helped lend a voice to a rebellious generation against war. John has been dead for nearly as long as he was alive, assassinated outside of his home in December 1980, at the age of 40. Earlier this month, the U.S. Postal Service honored the singer and songwriter with a stamp.

“It’s a privilege to commemorate the life of John Lennon – one of the most celebrated musicians and iconic personalities of the 20th century,” said Postmaster General and CEO Megan J. Brennan. “The world was influenced by John Lennon’s music and his commitment to the ideals of peace and unity. We continue to be inspired by his memory.”

John joins Elvis Presley, Ray Charles and Sarah Vaughan as artists immortalized by the USPS in its Music Icons stamp series. The commemorative stamp features a photo taken by noted rock ’n’ roll photographer Bob Gruen in August 1974. It shows the musician on the rooftop of his Manhattan apartment taken for the 1974 album “Walls and Bridges.” The original black-and-white image was treated in gradations of color to create the artwork for the stamp, which is now available for purchase.

Gordon Thompson has yet to purchase the stamp. The Skidmore College professor is considered the local expert on all things Beatles. He is the music department chair for Skidmore. He said he remembers the Ed Sullivan broadcast that introduced his generation to the Mersey Sound. Thompson is a ethnomusicologist, or one who studies the relationship between music and culture. He’s taught classes on how The Beatles influenced culture from the 1960s to today. Though he is a fan of John and the Fab Four, he said he does not collect memorabilia.

“Unless books and recordings are memorabilia,” said Thompson, “in which case I’m guilty.”

Ono’s perplexing admission that she was concerned few people would attend the day’s ceremony contrasts against her late husband’s iconic status. He was, of course, a founding member of the Beatles. The Beatles still hold records for a string of hits released from 1962 to 1970, including “All You Need is Love,” which later served as an anthem for John’s humanitarian endeavors. John also was a successful solo artist. His last of seven studio albums, “Double Fantasy,” was

released three weeks before he was killed. It includes “Beautiful Boy,” a lullaby to his son, Sean.

Julian Lennon, John’s son from his first marriage, did not attend the ceremony. Since his father’s death, he has been candid with details describing a dismissive and abusive father. In a 1998 interview with The Telegraph, Julian called his father a “hypocrite.” As the world recalled hearing him sing “give peace a chance,” Julian recalled how that same voice could easily “tear someone up.” Julian had a distant relationship with his father, both geographically and emotionally. He didn’t know him as the doting father Sean did.

“I think [John] Lennon offered us an example of our best and worst impulses,” said Thompson. “He was no saint, but neither was he evil; and we watched as he wrestled with his impulses on a very public stage.”

Thompson referenced a line from The Beatles’ 1967 hit “Getting Better.”

“I used to be cruel to my woman, I beat her and kept her apart from the things that she loved.”

It was an innoxious statement fans seldom thought to analyze when it was released on “Sgt. Pepper’s Lonley Hearts Club Band.” John, however, would later admit to Playboy magazine, quoting from his own song, that he was an abuser.

“I was a hitter,” John told Playboy. “I couldn’t express myself and I hit. I fought men and I hit women. That is why I am always on about peace.” He added that he did not curb his volatile behaviour until he met Ono. Soon afterwards, the world would see Lennon as an advocate for peace, a champion for women’s rights and a critical voice against organized religion.

“He questioned the role of religion in society and the righteousness of those who present themselves as religious,” said Thompson. “He recognized the hypocrisy inherent in religious practice and spoke out about it. And for that, he was assassinated. His killer had harbored resentment over the comments about the relative popularity of Jesus and brought these with him to New York.”

John Lennon was shot dead on Dec. 8, 1980, in the archway of the Dakota Apartments by Mark David Chapman. He was posthumously inducted into the Songwriters Hall of Fame in 1987 and twice inducted into the Rock and Roll Hall of Fame: as a member of the Beatles in 1988 and as a solo artist in 1994.

Julian was left out of his father’s will. Though a trust was established to benefit all of John’s children, Julian sued to obtain his share of his father’s estate. Julian told The Telegraph that he continues to reach out to his brother, Sean, but that the relationship is distant.

The USPS designed the stamp pane to resemble a vintage 45-rpm record sleeve. One side of the pane includes the stamps and brief text about John Lennon’s legacy. A black-and-white photograph of him seated at his white piano appears on the reverse.

“Not to be too cliched, but I think Lennon’s death symbolized for us the official passing of an era,” said Thompson. The Beatles expert was absorbed in the music and culture of India when Lennon was killed. The young ethnomusicologists had “moved on.”

“Lennon and the Beatles had shaped a major part of our lives, he said, “but we, and they, had moved on. We had abandoned a phase in life when we had ignored the consequences for our actions. We had become adults. John Lennon had once been Peter Pan, lured into the world of mortals. Now, we recognized that we had lost something special.”