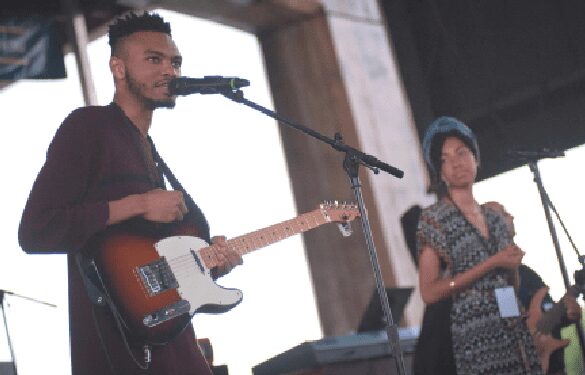 his year, The Age has played Rockin on The River and Alive at Five. The band plays Lark Fest on Saturday. Michael Hallisey / TheSpot518

ALBANY — When Adrian Lewis takes the stage at Lark Fest this Saturday, Sept. 22, he will complete an unofficial Triple Crown here in the Capital District.

Better known as The Age, Lewis played Rockin’ on the River and Alive at Five this year. He and his band will headline upstate New York’s largest one-day street festival this Saturday.

“I’m super excited about Lark Fest,” said Lewis. “I’ve wanted to be a part of it for a few years now and it’s kind of mind blowing that we are going to be a headlining act this year.”

To place his excitement into perspective, he opened for the B.B. King Blues Band featuring Tito Jackson at Alive at Five this June.

The Age is one of two headlining acts which also includes Stellar Young. Saturday’s performance will be Stellar Young’s third at Lark Fest.

“We’re so humbled to be a part of such an awesome event,” said lead vocalist John Glenn. He added that the band will be selling sunglasses to fund its third release “And Turned to Ash.”

The lineup to this year’s festival, the 37th for Lark Street, is worth taking note.

The music starts with Becoming a Ghost at 11 a.m. Becoming a Ghost most recently played at WEQX’s Battle of the Bands at Jupiter Hall. It put on a high energy, interactive performance that moved the crowd. The band could have just as easily won the competition to open last week’s Pearlpalooza.

Comptroller Conners will not run again