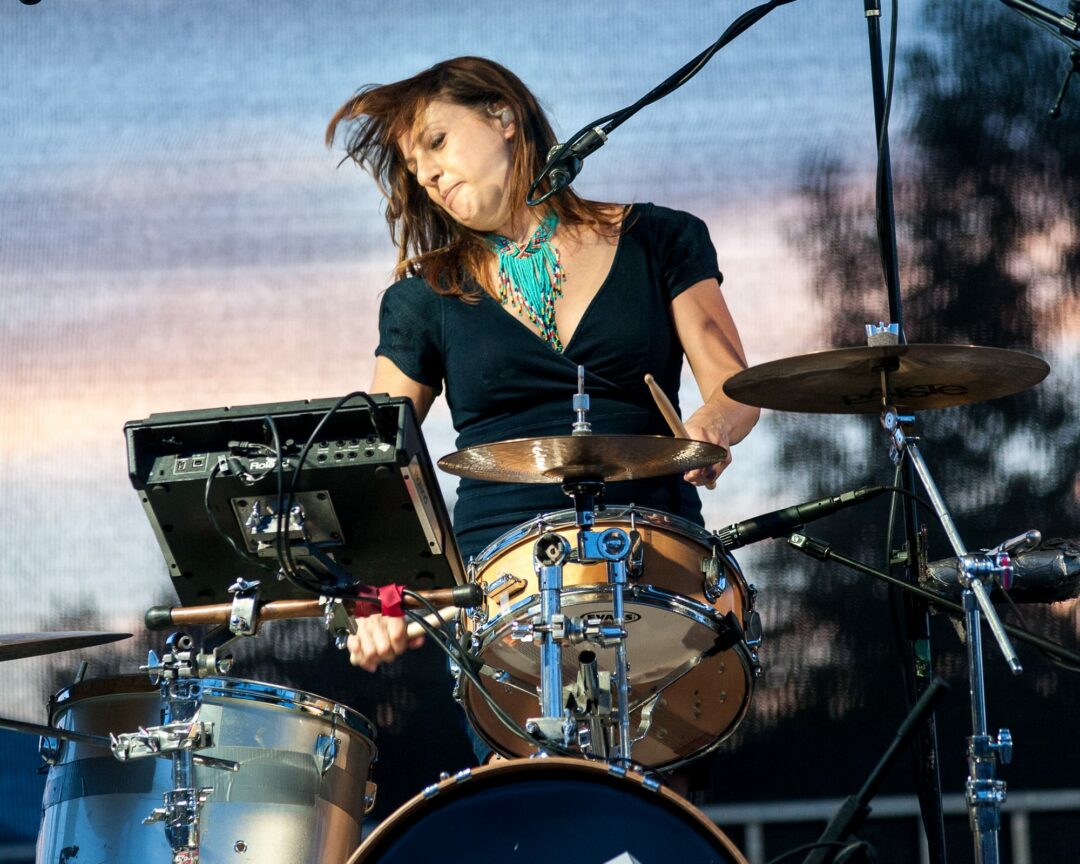 Melanie Krahmer banging on the drums as SIRSY performed at last year’s Rockin’ on the River in Troy. Photo by Jim Franco / TheSpot518

Although popular alt rock duo SIRSY is temporarily grounded due to drummer and vocalist Melanie Krahmer’s illness, she remains “brave and kind.” The Capital District is following suit with an event designed to provide the strength, joy and better days she asks for at the song’s start.

Local musician and comedian Erin Harkes, one of Krahmer’s good friends and colleagues, is organizing a benefit, aptly named Melstock!, to help her with medical costs. Krahmer was diagnosed with breast cancer for a second time earlier this year.

The benefit will take place at The Saratoga Winery, located on Washington Street, in Saratoga Springs, on Saturday, July 7, at 5 p.m. While admission is free, there is a $10 suggested donation at the door, with all proceeds directly benefiting Krahmer.

“When I found out about Mel’s cancer, the first question in my mind was, ‘how can we help?’,” Harkes said. “I like to think of myself as a proactive person and I felt like I had to do something. Melanie would do this for anyone if the roles were reversed.”

Ever since Krahmer announced her diagnosis on April 30, Harkes has been asking fellow musicians and comics to participate in a benefit for Krahmer. To date, she reports that she’s been met with optimism.

“SIRSY was supposed to perform at The Saratoga Winery on the night of the benefit before everything happened,” Harkes explained. “I contacted the winery and asked if they had found anyone to replace SIRSY, and they said no.

“I suggested putting together a benefit for Mel and getting everyone out to help her. They were so on board and have volunteered items to raffle off,” Harkes continued. “Since then, it’s been a work in progress. I’m still putting it together.”

Harkes added that a member of The Lustre Kings, the internationally-renowned rockabilly band that’s based here in the Capital District, contacted her after hearing about the diagnosis and asked what the band could do for Mel.

“I immediately asked them to jump on board with us, and they agreed,” she said. “I will be singing with them.”

Harkes also reached out to Ubuntu, the band that’s performing at the Winery just before Melstock! It has agreed to donate all proceeds from its show that afternoon to the benefit as well.

“[Ubuntu] stands for ‘I am who I am because of all of who we are,’” Ubuntu manager and singer Sue Wolfer explained, adding there’s a synergy between musicians that bonds them together. “You just step up and do the right thing. It’s an honor to be a part of the bill.”

In addition to performances by Harkes, The Lustre Kings, Ubuntu and other musical guests who have not been announced yet, Melstock! will also include a comedy night.

“Everyone needs a laugh right now,” Harkes explained, adding she will be one of the comics on stage.

Quentin Davis, Jen McMullen, Jim Felter, Dre Cerbin and Ryan Shanahan will be joining Harkes for the comedy portion of the Melstock!

“I want this to be a huge event,” Harkes said. “I don’t want it to be heavy though. I want everyone to have fun.”

Harkes continued this will be the first of many benefits for Krahmer.

“We will keep going until she doesn’t need the help anymore,” Harkes said. “Whether that’s two, five, seven, 10 benefits. And then we will start a benefit for others in need. This will be an ongoing thing for those in need, even after Mel gets better.”

Harkes will add Krahmer’s GoFundMe page to her website for anyone who is looking to donate to the cause or is looking to make a donation and cannot be at the concert.

Krahmer posted an announcement about her diagnosis to Facebook on April 30. She has been open about her previous battle with cancer and was in remission for a little over seven years before the recent diagnosis.

“She was probably flooded with thousands of messages after she put that up,” Harkes said, adding she had no idea Krahmer was awaiting biopsy results.

“I had just talked to her two days before to talk about trivial things in my life, and she didn’t mention it at all,” Harkes said. “I was heartbroken for her and Rich.”

Rich, or Richard Libutti, is Krahmer’s partner, both in marriage and in the band.

The duo performed 218 shows in 2017, according to the GoFundMe page created for Krahmer.

Krahmer is overwhelmed by the love and kindness shown by her community and those who have reached out, she said.

“I have been receiving cards and hanging them up on the walls in my kitchen,” she said. “I feel special. I’m totally overwhelmed in a good way. I can’t thank everyone enough for the cards, emails, Facebook messages and love.”

She added the love and planned benefit are appreciated in a time where everything in SIRSY’s life is on hold. Being full time musicians, performing is the couple’s only source of income.

“People have been so supportive luckily,” she said. “This disrupts every single part of your life. Without this, we’d have absolutely no money coming in. I’m so thankful and so blessed that people are so kind.”

Krahmer has wrestled with many different emotions since receiving her diagnosis, she said. She found out her cancer had come back while she and Libutti were driving to a show in Tulsa, Oklahoma.

“We pulled over into a gas station and just hugged one another and cried,” she said. “We were heartbroken. I felt such sadness that the cancer had come back because I never thought in a million years it would.”

This is her second bout of breast cancer in a decade. Krahmer had just celebrated her seventh year cancer free when she received the diagnosis. According to cancer.gov, most cancers that recur do so within the first five years, making Krahmer’s diagnosis even more of a surprise.

Krahmer continued she then felt anger because SIRSY had to cancel its West Coast tour so she could return back to the Capital District for treatment.

“I’m now at a point of acceptance,” she continued. “I’m also grateful because the doctors caught it early enough, and I’m going to live.”

She also struggled with disclosing the type of her cancer because of the inevitable glances she would get.

“When I say breast cancer, eyes automatically go down to my breasts,” she said. “It’s totally involuntary; I know people aren’t doing it to be inappropriate or malicious.

“But I finally said it’s breast cancer because I needed someone to talk to,” she continued. “I was told by a friend that by saying it, that’s how I’m raising awareness. I realized she was right.”

Krahmer said she hopes to be back to the stage by SIRSY’s Freedom Park performance in late August.

“We feel very lost and out of sorts right now,” she said. “I can’t wait to get back on stage.”